Posted on July 3, 2014 by rivertoprambles

I got a late start on Cedar Run this year, but it felt good to return to my year-old quest of

fishing all of this remarkable stream in northern Pennsylvania. My last visit was in mid-November when I broke a bamboo rod while fishing in the gorge (see “The Blue Pool,” aka “The Cedar Run Experience, Part 7,”  11/13). I had the rod repaired over the winter and have been anxious to resume the upstream journey bit by bit.

I had fished up to the Blue Pool in November, but on this occasion it wasn’t easy picking up the slack at Blue so I decided to access Cedar where the road passes over Tumbling Run. From there I’d walk down to Blue and gain some new ground near a pool known as Little Blue.  I found the Little Blue within a quarter mile of downstream fishing, but that’s as far as I traveled this time out.

It was getting hot and humid and the clouds became dark and threatening. According to my topo map, I was still about half a mile above the big Blue Pool, and I promised myself that on the next visit I would fish that stretch between the Blues and then be ready to push to higher ground.

The stream was in good shape for late June, with plenty of water and a temperature in the low 60s. Despite the presence of a gravel road somewhere in the woods above me, I felt a touch of wildness in the gorge. The dripping cliffs, the large white pines, the chattering of a winter wren, etc., penetrated my senses and provided that fix of wildness that allows me to feel more than a lame monkey in a world of commerce. 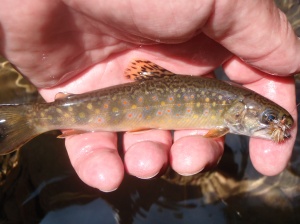 I thought of that concept, independence, and the impending U.S. holiday. Being on the stream felt like being free, but freedom is a relative word describing our potential for making choices. I felt a love for this place where politics and patriotism did not enter, but where behavior and imagination were accounted for.

The fishing was slow, as can be expected in early summer, but I managed to catch and release five wild trout– four browns, one brook, all rather small but brightly colored.

I saw a group of four mink hunting along the rocky bank beneath a cliff. The four 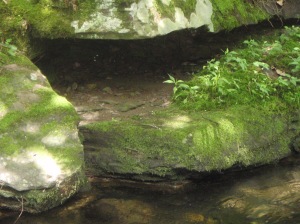 members of the weasel family bounced among the rocks, reversing their course and then proceeding upstream once again, perhaps enjoying the day like a wayward human with a fishing rod.

A porcupine stood dining among the grasses near my feet. I moved for my camera in a vest pocket, and the porky headed for the nearest tree. I doubt that it enjoyed being interrupted at its meal. I took a couple photos and returned to my fishing. The quill meister backed down from the tree and headed for deeper woods.

Two minutes later I was in the stream, fiddling with fly and leader, when I heard rustling at my back. Porky? Perhaps with a couple of bully friends to confront me? I turned to see a young fly-fisher looking at me with a sullen eye.

“Oh, heh!” I uttered, giving away my shock. Seeing another fisherman here was the last thing I expected. “For a second, I thought you were a porcupine. I saw one right there a few minutes ago.” 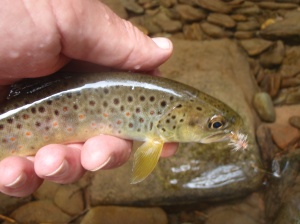 The guy looked like a model angler from a new Cabela’s catalogue, with vest and waders just a few days old. “Any luck?” he asked. He still wasn’t smiling. I wondered where his model angler wife and daughter were– the ones in the catalogue beside him, the ones sporting the lastest gear and clothing for the missus and the missy. I guessed that he had begged for free time and a bit of solitude today.

He told me that the trout seemed few and far between on Cedar. I disagreed politely, saying there were plenty of wild brooks and browns; it was just a slow time to be fishing. The trout were probably napping in their version of the Day Room, watching piscine television, or playing cards. The angler didn’t crack a smile. “This is only the second time I’ve fished this stream,” he said. “I’m heading out. Good luck to ya.” 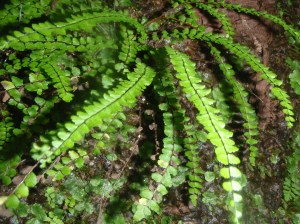 The porcupine who became an angler walked away forever. I went downstream and hooked up with a brown that nailed my Stimulator.

I thought about the four mink that I’d seen, and wondered if, on getting back to my car, I would see four gentlemen suiting up beside their vehicle. I would look for evidence of fur and claw. I might ask them if they’d seen anything while checking out the cliffs below. 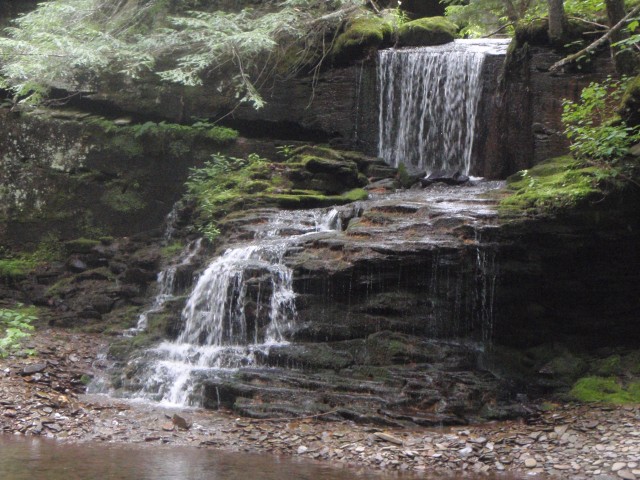 Welcome to Rivertop Rambles. This is my blog about the headwaters country-far afield or close to home. I've been a fly-fisher, birder, and naturalist for most of my adult life. I've also written poetry and natural history books for thirty years. In Rambles I will mostly reflect on the backcountry of my Allegheny foothills in the northern tier of Pennsylvania and the southern tier of New York State. Sometimes I'll write about the wilderness in distant states, or of the wild places in the human soul. Other times I'll just reflect on the domestic life outdoors. In any case, I hope you enjoy. Let's ramble!
View all posts by rivertoprambles →
This entry was posted in Uncategorized and tagged Blue Pool, Cedar Run, Cedar Run Experience, freedom, imagination, Independence, mink, porcupine, wild trout, wildness. Bookmark the permalink.

An Arts-Filled, Tasty And Sometimes-Loopy Jaunt Through Life

Mindful, Seasonal Living in Middle England - with a family of seven

A blog about exploring the Pine Tree State and beyond

a blind writer's path to happiness

See She Flies And Writes

Reflections on the natural world outside our backdoor by Robert J. Romano, Jr.

Working to maintain Slate Run as a conservation project stream, with regulations to provide for the continuation of Fly Fishing Only

Things to do and see in New Mexico