Ausable on the Skids

Posted on July 6, 2014 by rivertoprambles

The West Branch Ausable River, in the Adirondacks of New York, isn’t really on the skids, it just seemed that way the past few days. 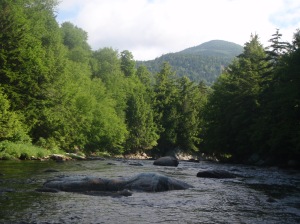 As the summer days heat up, the temperature of the river water naturally rises to the point where it stresses some of the trout, so the fishing starts to wane, even in the morning and evening hours.

In early July the river level was dropping toward the normal zone as the late June flush began to pass. Two young men had recently drowned while testing out the waters of the Flume above Wilmington. Peering into that gorge while passing by with a fly rod in hand, I wasn’t surprised that another tragedy occurred. 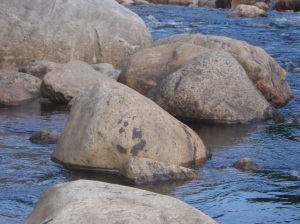 On Monday evening, in the tannic flow of the boulder-studded catch-and-release water near the Flume, I missed the rise of a large trout leaping for the fast drift of my Rusty Spinner dry.

Next morning, my friend Walt came to visit from Vermont and we hit the river without delay. I caught a small brown trout below the dam at Wilmington but the water temp had risen to 70 degrees, so we decided to head upstream. The special regs water begins near the Lake Placid ski jumps, and the river there was more congenial to our efforts. It was cooler and very comfortable in the fir-scented air. The songs of white-throated sparrows punctuated the mountain scenery.

It was comfortable, but there was little sign of hungry trout. We decided to try a small feeder stream nearby, a brook choked with fallen trees and boulders. Exchanging my “Founders’ Rod,” an 8.6-ft. bamboo, for a tiny stick of Fenwick glass, I followed Walt into the wilderness. We didn’t get far but we each managed to fool a brook trout.

Traveling toward the headwaters of the West Branch, we stopped to fish a section near the highway. Again, the fishing was slow. Persistence was the key to Walt’s success while working a deep hole from his stand behind a boulder.

I had taken a seat on a nearby rock to remove the water from my leaking waders. I had just removed my shoes when a brown trout took the beadhead nymph that Walt had

offered. He hollered for the use of my net, but it was in the car. I rushed from my position on the bank hoping to get a decent photo of the fish. I learned that neoprene socks do not get a solid grip on glacial stone.

On the skids, I fell forward and down. Between rocks the size of chairs. 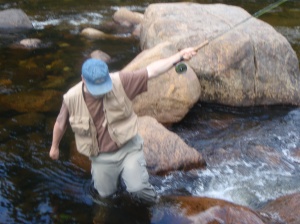 I tore a thumbnail, scraped an arm and hip, saw my life flash by on another planet, and put a small dent in the little camera I was holding. Luckily, my head missed smacking into granite, and yeah, I did get a couple of smiling Walt pics on my trusty old Olympus.

My friend hit the homeward trail that evening after our Switchback Ale and burgers in Saranac Lake. I went back to pounding the Ausable, missing a couple of large fish at dusk, despite an apparent lack of hatch activity.

The next morning I made a reverent approach to the renowned pool at Shadow Rock and finally caught a nice brown on a tiny beadhead. As I said, the fishing was slow, but the outing itself (although a bit treacherous at times) proceeded at a happy pace. 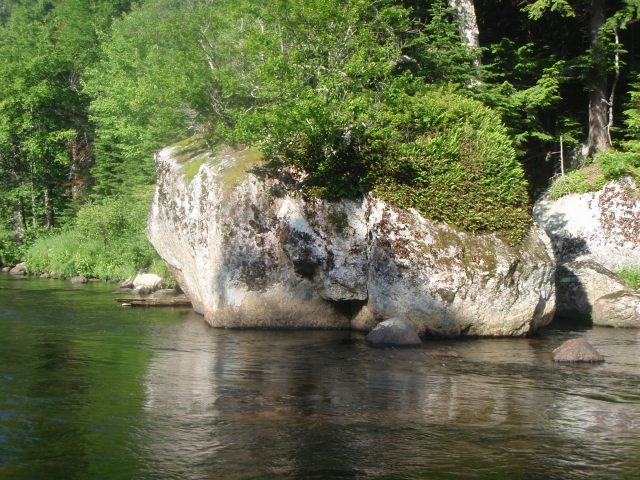 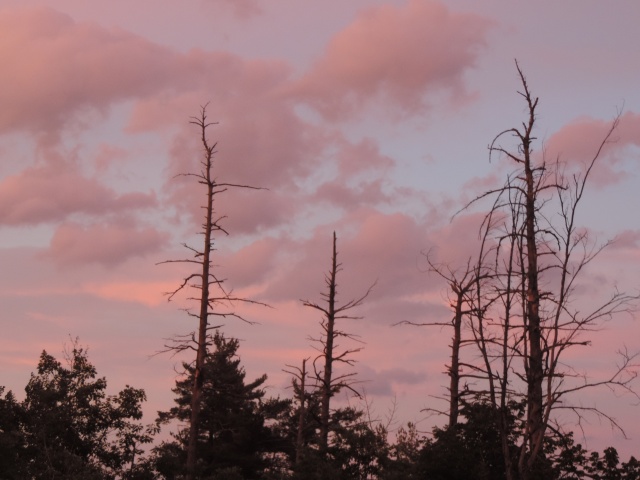 Welcome to Rivertop Rambles. This is my blog about the headwaters country-far afield or close to home. I've been a fly-fisher, birder, and naturalist for most of my adult life. I've also written poetry and natural history books for thirty years. In Rambles I will mostly reflect on the backcountry of my Allegheny foothills in the northern tier of Pennsylvania and the southern tier of New York State. Sometimes I'll write about the wilderness in distant states, or of the wild places in the human soul. Other times I'll just reflect on the domestic life outdoors. In any case, I hope you enjoy. Let's ramble!
View all posts by rivertoprambles →
This entry was posted in Uncategorized and tagged Adirondacks, brown trout, Flume, Olympus, Shadow Rock, skidding, summer fly-fishing, Switchback Ale, W. Branch Ausable River. Bookmark the permalink.

14 Responses to Ausable on the Skids