Posted on November 19, 2019 by rivertoprambles

Winter: Klukey died in a bear trap he had set near Kettle Creek. Klukey died three miles from his cabin, wandering in the deep snow till his feet accidently struck the pan. Those jaws sprang up– held him through the pain, the cold, the nights and days, the hunger. Held him as the eyes of wolf and bear drew near. Hunters found old Klukey’s bones– clean and scattered, with bits of skull and hair and beard. Those iron jaws gnawed at his feet and lower legs, held him like society had held him till, at last, he came to the Kettle to hunt and trap for 40 years, alone. They found my old friend’s bones. Near the hatchet that he loved, near the pocket watch that never stopped its ticking. 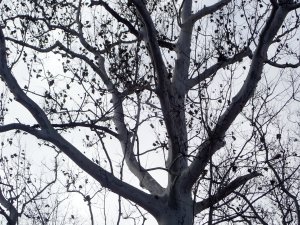 Spring: Wish that I could fish like Henry Glassmire. Henry’s got only one arm. Left his other on the battlefield, but he fishes like a madman. Baits his hook by holding it to a stone with his boot. If no rock’s available, he holds the hook between his teeth and threads the worm. A strong taste of garden worm? So what. He’s good. He fought for the Yanks, and really, it’s nobody’s business but his own.

Wish I had the good sense of the Jordans. John and Maryanne, up in Jemison Hollow, my East Fork “neighbors.” John once poled a year’s supply of goods from the Susquehanna. A keg of whiskey and a half-barrel of flour had a fine ride on his boat. Why the hell did you haul so much flour? quipped Maryanne. They know the value of a well-aged drink. For raising a barn, collecting logs, and purifying the blood.

Summer: A few summers back, the East Fork had a dam right here, the flood-trash forcing water through the branches and around its ends. It formed a beautiful pool, a home for a large trout that several people wanted. Trees and brush overhung the pool, so there was no way to fish for that trout except from the tricky dam, itself.

The fish was in plain sight but he was smart. Ignored my “stone fish” and the worms that floated toward his nose. I’d cast a fly–  the trout would dart off to the side. I tried to catch him for about two hours till I saw the light and changed my ways. A cricket chirped and grasshoppers leapt along the bank. I walked to the meadow and collected hoppers.

Stepping back on the dam, I waited, then flipped a hopper to catch his eye. Another and another, till at last the great trout rose and splashed and gobbled one. I baited my hook, slowly and carefully, and gave him time to think about the taste. I tossed the hook and… whoosh! He rose. I lost my balance, slid off into waist-deep water and lumbered away– toward the far end so he wouldn’t tangle in the roots or flood debris. I worked him slowly to a gravel bar. Pulled him out and held him in my shaking hands. So handsome, this fruit of my labors. The only fish I caught that day.

Fall: I venture to my homestead boundary, to the fence-line edge of useful things. I find some Vinland vines, fox grapes, hanging in tight blue clusters.

Juice breaks out of dusty skins; the globules are eaten from hand, their taste as colorful as autumn’s palette, waving on the tongue like Viking spirits.

Here the waxwings feed by day, and the red fox passes at night. I venture toward the limits of knowledge, tasting the wild grapes, late summer fruit. I’ll jump the back fence of experience– before the frosts of autumn come, before the winter bones start creaking.

Too late for the run of autumn browns on Naples Creek (11/18/19), I caught only bunches of these little streambred ‘bows…

Jim caught the only fish on our recent afternoon outing, a fine landlocked salmon.

Welcome to Rivertop Rambles. This is my blog about the headwaters country-far afield or close to home. I've been a fly-fisher, birder, and naturalist for most of my adult life. I've also written poetry and natural history books for thirty years. In Rambles I will mostly reflect on the backcountry of my Allegheny foothills in the northern tier of Pennsylvania and the southern tier of New York State. Sometimes I'll write about the wilderness in distant states, or of the wild places in the human soul. Other times I'll just reflect on the domestic life outdoors. In any case, I hope you enjoy. Let's ramble!
View all posts by rivertoprambles →
This entry was posted in Uncategorized and tagged fishing, history, Independence, jumping the back fence, literature, nature, personal narratives, poetry, seasons, Sinnemahoning, Walt Franklin, Wild Boy Cycle, writing. Bookmark the permalink.