[I’ve been fly-fishing steadily since my return from vacation and will soon get back to regular broadcasting, if such a thing exists here at RR. I do have one more island post to prepare for you after this one appears. I hope that you’re enjoying them half as much as I enjoy bringing them out. P.S., the two minute-plus video at the end is by Alyssa Franklin. ]

We hiked the 2.7 mile Trumbull Trail along the steep northern coastline for a visit to some well-known tide pools. It was good trail through a dense forest that occasionally breaks into views of the blue-green sea below. Despite a couple of challenging ascents/descents, the hike along the coastal bluffs to a small, wild bay with tidal pools was easy going. There were flourishes of rainforest life, and when they briefly disappeared, the sun bore down oppressively. 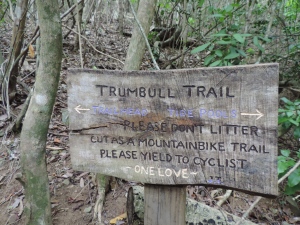 Unfortunately the tide was up when we arrived at the bay, so there was no swimming then. It was dangerous to climb on the rocks, so we rested and took in the sights, content to be in a wild and green location. Walking back 2.5 miles toward the place where we had started, we took refuge at a bar inside the Renaissance Carambola Beach Resort and Spa, one of three such places built by the Rockefellers. All of the island’s resorts, no matter how exclusive, are open for use by the public. That is, their beaches and bars, etc., are available to anyone who visits, though you probably wouldn’t feel comfortable on their luxury seats unless you’re also staying for the night and spending big bucks. 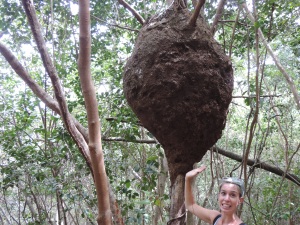 Other than fire ants, we didn’t experience pest problems on the island. That said, you wouldn’t want to invite these termites into your home.

Again, I went out for an hour or two of night fishing. I gave notice to the hermit crabs lounging around the Frederiksted planks and watched them head for cover. It was fun to cast with my weight-forward nine as heat lightning flashed on the horizon and as small groups of black families strolled or fished along the pier. 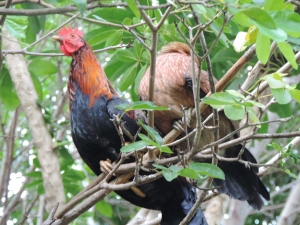 Wild chickens (trout fly hackles galore) are found all over the island.

Scuba Diving 101 students also used the water’s edge, their greenish lights emanating from the depths like bioluminescence. I didn’t mind them swimming nearby until I saw them coming my way and pushing big fishes out ahead of them. Fly fishing and scuba diving just don’t mix when practiced in the same location. 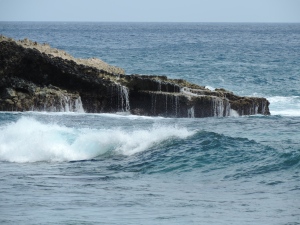 Love and theft don’t harmonize either. After my wife and daughter brought me an IPA to drink while fishing, we were joined by a fellow who had to keep an eye on a yacht that was resting in the distance. Apparently some character or group of jerks had approached the vessel in a dinghy and absconded with one of its motors. It wasn’t us that he was concerned about, confiding that the theft was probably “an inside job.”

One afternoon we visited the St. George Village Botanical Gardens. The site, where Alyssa currently does volunteer work, is a 16 acre “garden of trees, shrubs, vines, and flowers built around the ruins of a 19th-century sugarcane workers’ village.” We took a self-guided tour through a magical display of gardens reflecting semi-arid and rainforest themes, a colorful and varied display of life as it was before the days of modernization.

We had eaten lunch at the Chicken Shack, a small restaurant popular with locals and tourists alike. The fried foods and vegetables were tasty, to say the least, but the chicken, jonny cakes and conch-in-butter dish eventually put my stomach on red alert. 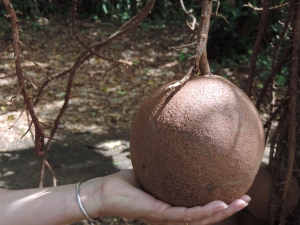 That night we traveled to Christiansted for a meal at a new place (Balter’s) owned and operated by a famous chef. On a more modest level, a friend of Alyssa’s working at the restaurant came around to greet us excitedly.

Wife and daughter eventually declared the food and drink to be excellent, and I had to believe them. I was suffering from the earlier meal at the Chicken Shack. I couldn’t eat or drink a thing, other than to sip at my bitters and hope for the best. The elegance of a meal that included a superb Riesling and freshly caught snapper eluded me entirely. Luckily, by the time we got home I was feeling more like a survivor. 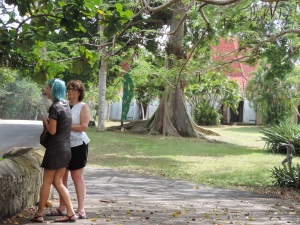 Speaking of Christiansted, the major village and island harbor, I’ve got to tell you about Friday night with “Jump Up.” I had wanted to see the Moko Jumbies at some point, and the place to see these costumed dancers on giant stilts is at Jump Up, a St. Croix celebration held four times a year.

odd ones at the gardens

We just happened to be there at the right time for the party.

The streets were closed off to vehicles and the people were in party mode. Bars and restaurants thrived. Vendors lined the streets. People were walking around and living for the moment. I can vouch that the air had sweetness and that open containers of alcoholic beverages were fine as long as peace and harmony reigned– and they did, at least on this occasion. It felt odd to say “Good Night” to a corner cop as you passed him with an opened beer or drink of rum.

Moko Jumbies at Jump Up

The Moko Jumbies walked and danced to traditional island music as they made their way around the sloped streets of the village. The Moko was originally a representation of an African king that made its way to the New World during the slave trade. Jumbies were originally evil spirits witnessed during the same era. Moko Jumbies, the African spirit chasers, have been resurrected for public celebration and have become iconic symbols in Caribbean places like St. Croix. It’s said that these dancers, standing tall above the crowd, can see all evil and chase it away.

resting on a rooftop

Sometimes an observer on the street would reach up and tip a costumed dancer with a dollar bill. I thought it was cool that when the dancers needed a break the music would pause and the jumbie chasers would take their rest by sitting on a porch roof or other convenient seat above the crowd.

That night I walked out to the blue-lit swimming pool in the courtyard of Alyssa’s home. I didn’t know where the iguana was, but large fruit bats swooped for insects above the vibrant water. They, too, were spirits of a sort, and good. 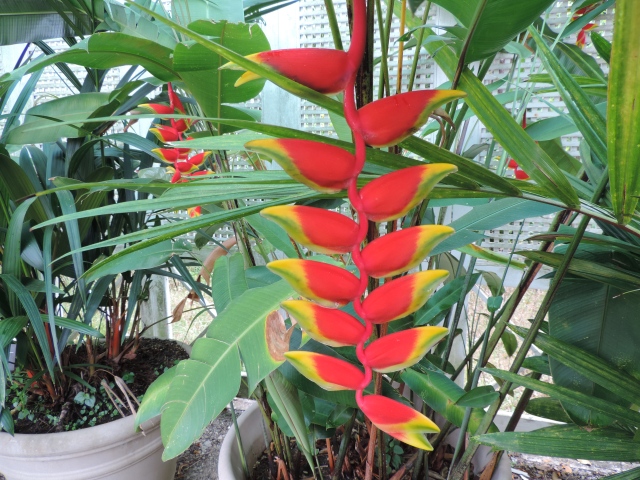 Welcome to Rivertop Rambles. This is my blog about the headwaters country-far afield or close to home. I've been a fly-fisher, birder, and naturalist for most of my adult life. I've also written poetry and natural history books for thirty years. In Rambles I will mostly reflect on the backcountry of my Allegheny foothills in the northern tier of Pennsylvania and the southern tier of New York State. Sometimes I'll write about the wilderness in distant states, or of the wild places in the human soul. Other times I'll just reflect on the domestic life outdoors. In any case, I hope you enjoy. Let's ramble!
View all posts by rivertoprambles →
This entry was posted in Uncategorized and tagged adventure, botanical gardens, Caribbean Islands, Caribbean Scrambles Part 3, Christiansted, dining, fishing, hiking, Jump Up, Moko Jumbies, nature, photography, rainforest, resorts, scuba diving, spirits, St. Croix, tide pools, travel, tropical flowers, U.S. Virgin Islands. Bookmark the permalink.