With Roots in the Sky (Finale)

1. Just over two years ago I began a series of blog posts that I’ve called “The Cedar Run Experience.” The series has reflected my intent to fly-fish and explore the whole length of a beautiful trout stream, Cedar Run, in north-central Pennsylvania. With

this post, The Cedar Run Experience, Part 20, my explorations of the run are finished (though, of course, the fishing never ends as long as I’m able).

I began the fishing walk at the mouth of Cedar Run, at Pine Creek, on Memorial Day 2013 and then, as time allowed, worked my way upstream by casting over the pools and riffles as I found them. On each occasion throughout the walk, I tried to start the day’s fishing at a point where I had left off previously. (“The Cedar Run Experience,” posts #1 through #19, can be located on RR via Search.)

Although the project was completed at a leisurely pace and, overall, was easier than “The Slate Run Odyssey” (also available), there were challenges throughout. 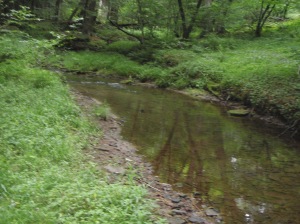 Cedar Run flows through a vast state forest and, as long as it is, has more accessibility than Slate. That said, you don’t want to travel its ribbon-like roadway in a season of inclement weather. It’s a snowmobile trail throughout the winter months.

The run is nestled in a winding gorge without cell phone coverage or civilized conveniences. This is some of the wildest country in the Keystone State, a wonderful place to hike or hunt or fish with restrictive tackle (see state regs for Cedar Run). It’s a place where you can better understand your own mortality and, as such, you tread with care.

And so I’ve finished my 11-mile immersion in the wild. I’ve walked into the heights of Cedar Mountain with a six-foot fly rod and fished the little stream as far as I cared to go in leafy June.

2. The headwaters have “roots,” or freshets of water nourished by a mostly healthy forest. On the day before the Solstice, I entered such a place, my anger at the world dissipating slowly with each step.

I entered a quiet realm where I could try to think rationally and be taken aside by what is beautiful. Yes, it’s possible! And happening in some place near and dear to where each of us is living.

It was good to come here while the rains still provided a decent flow. It was good to find clear water while the streams downvalley flowed high and muddy. It was good to see that freedom can be born in a simple place like this, that the hyper-patriotism of the world (where people are blind to the quality of life beyond their own political boundaries), is viewed for what it is. 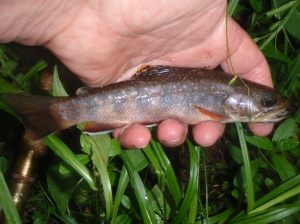 Small brookies slammed the Stimulator dry fly and returned, a little dazed, to the riffles and log homes of their stream. The biggest fish, a nine-inch, darkly-colored native, spun out from a tiny plunge-pool– the highest point on 11-mile Cedar that would offer me a temporary gift.

Black-and-white warblers sang their shrill and modulated notes, and hunted for bugs in a head-long manner down the trunks of larger trees. When the faint tracks of a forest road disappeared in a jumbled glade, I knew I had arrived.

Turning to face the downstream brook, I heard the soft red veer notes of the thrush known as the veery. From the other side of me came the teach Teach TEACH cry of the ovenbird, the notes everywhere harmonizing with a song of falling water. 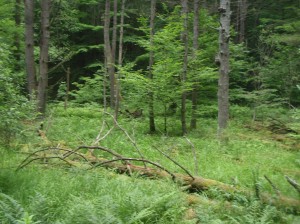 In a place like this, I’m reminded that the violence of nature has nothing to do with the violence promoted by stupidity and the lack of critical thinking. Corporate institutions may condition people into a robotic and consumeristic lifestyle, but a place like this can give a person wings.

Last autumn, following a blog post where I speculated on where my walk of Cedar Run might lead to, I received a comment from Brent Franklin (of Bridging the Gap renown) who said, in part: “…The roots of a river are as high as one can climb.”

And that’s the gist of what I’m saying. A headwater region has roots. Like the crown of a tree, or an unearthed flower turned upside down, the uppermost “twigs and branches” take nourishment from the atmosphere and sky.

I could fish into that crown, perhaps. I could hold out for as long as I could climb.

And now the climb had reached its end.

Welcome to Rivertop Rambles. This is my blog about the headwaters country-far afield or close to home. I've been a fly-fisher, birder, and naturalist for most of my adult life. I've also written poetry and natural history books for thirty years. In Rambles I will mostly reflect on the backcountry of my Allegheny foothills in the northern tier of Pennsylvania and the southern tier of New York State. Sometimes I'll write about the wilderness in distant states, or of the wild places in the human soul. Other times I'll just reflect on the domestic life outdoors. In any case, I hope you enjoy. Let's ramble!
View all posts by rivertoprambles →
This entry was posted in Uncategorized and tagged anti-intellectualism, beauty, Cedar Run, critical thinking, fishing, freedom, headwaters, hiking, King Crimson, music, native trout, nature, philosophy, Pine Creek watershed, racism, roots, songbirds, Summer Solstice, The Cedar Run Experience Part 20, violence, walking on air. Bookmark the permalink.

22 Responses to With Roots in the Sky (Finale)