I’d passed the Pine Creek tributary a thousand times, hardly ever noticing its alder-bank flow beneath Route 6. I seldom considered its steep descent along the edge of state forest land until I learned it was a PA Class A wild trout stream and, if the stories were correct, it was one tough hombre to negotiate with either hunting boots or wading shoes. 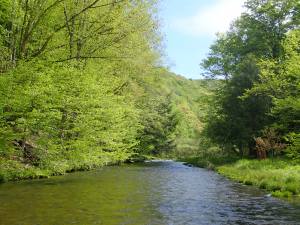 upper Kettle had a great caddis hatch at 50-degree water temp, but no fish moving…

Mill Run would be difficult but I had to check it out. The brush would choke me at the lower end. The fallen trees, rocks and boulders, rattlesnakes and Sidehill Gougers would be there to greet me, said a Pine Creek angler who just shook his head and searched his bait-box near the Log Cabin Inn.

“Yeah, last fall a guy was draggin’ out a deer he shot way up. He come down that run– no picnic even if you’re young and healthy– but he never made it to his truck. A heart attack. If you’re crazy enough to fish it, you should start on top where Shin Road ends and maybe you can find a trail. Just my opinion. Hey, you don’t happen to have a few nightcrawlers, do ya?” 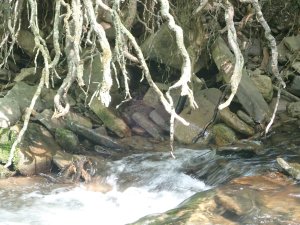 I climbed carefully, but nearly lost my balance with a head-long charge toward the streambed when a ledge rock that I stepped on broke away from its support, collapsing into white-water. I caught my breath and fished with even greater care. When a first brook trout rose and hit the #14 Stimulator, I reasoned that another instance of “lost terrain” was temporarily found, but this was no time to be resting on my laurels. 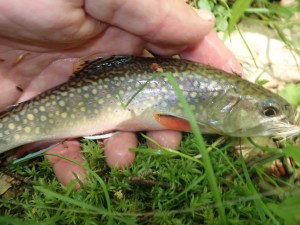 It was good to feel the mountain wildness here, but there was something less than a welcome air about it. Wilderness is indifferent toward humanity but this place had an edge that almost seemed malevolent.  It was good to fish beyond the roar of fracking trucks that rocketed along Route 6;  and despite the warm notes issued by a scarlet tanager and black-throated blue warblers, I began to think about the storms, the bad news, forecast for the afternoon. Then, to balance everything, I wondered what would be more interesting: finding the aftermath of a Sidehill Gouger or enjoying a cold beer downstream at the Inn? 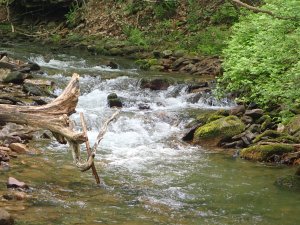 The mind can play odd tricks at times like this. I thought about the local hunter who collapsed while dragging out his deer. How much did Mill Run influence his death? I recalled a tiny stonecat that I found lying in the creek near my home. The two-inch minnow had died while forcing down a one-inch meal. The legs and tails of a stonefly nymph protruded from the poor thing’s mouth.

If I had fallen head-long from that broken rock today, I might have ended up like the stonecat. But I saw an image of a fallen hunter and his deer, and it didn’t look much different than a two-inch minnow with a one-inch stonefly hanging from its mouth… victims of circumstance all. 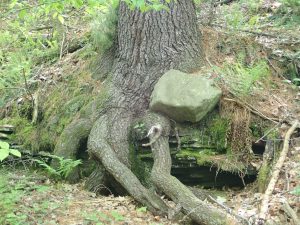 Would a pine tree toss a rock…

So I came to a place where Mill Run separated from all the other Mill Runs I have fished. There were no water-wheel abutments here. No cool abandoned structures set among the trees. No human history other than what I gathered from locals fishing down at Pine. I came to a place where the high banks, fallen trees and boulders pretty much spelled S-T-O-P and looked like a battleground where Gougers fought.

It was time to rejoin the world downstream: where beer was cold and hatches rose above the Pine, where barbecues were prepped and music played from camping sites. I could deal with that and most anything to come my way, for fishing this tough creek– for knocking at squelchy doorways where the native dwells. 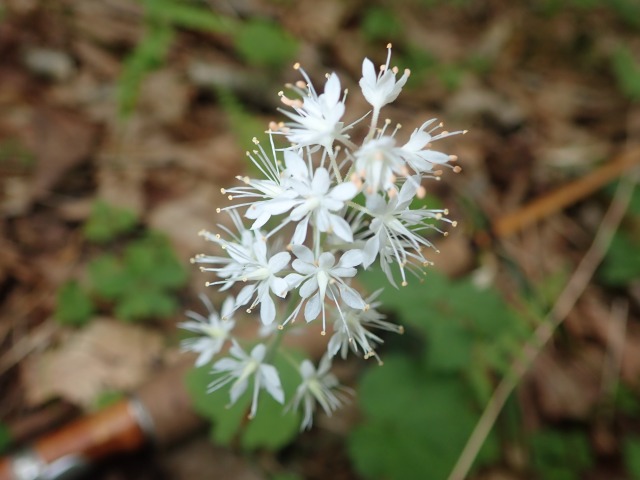 Foamflower– what appears when I make a “friend request”…

inside the squelchy doorway…

Jim & I fished a long run tributary & did well with dries….

Welcome to Rivertop Rambles. This is my blog about the headwaters country-far afield or close to home. I've been a fly-fisher, birder, and naturalist for most of my adult life. I've also written poetry and natural history books for thirty years. In Rambles I will mostly reflect on the backcountry of my Allegheny foothills in the northern tier of Pennsylvania and the southern tier of New York State. Sometimes I'll write about the wilderness in distant states, or of the wild places in the human soul. Other times I'll just reflect on the domestic life outdoors. In any case, I hope you enjoy. Let's ramble!
View all posts by rivertoprambles →
This entry was posted in Uncategorized and tagged ecology, environment, fly-fishing, Gougers, hiking, lost terrain, Mill Run, Pine Creek, poetics, psychology, wild, wild trout. Bookmark the permalink.

6 Responses to No Run-of-the-Mill Run