Posted on December 4, 2018 by rivertoprambles

[Many readers of Rivertop Rambles will recognize the name, Bob Stanton. Bob has been a follower and supporter of this blog from its early years on down to the present. I’ve had the pleasure of meeting him, first on RR and then in person several times, including a couple of fishing jaunts in northern Pennsylvania. Bob understands the world of small stream angling and the natural realm of rivertop environments. I invited him to write up his experiences with tenkara, a subject of increasing popularity in American fly-fishing and recreational pursuits. He responded with the following “treatise” (with photographs) from his personal engagements, a work which I’m proud to share, and one which I think you will enjoy, whether you fish tenkara or have, as yet, no knowledge of this ancient form of angling other than an interest in our natural world. As always, please feel free to share your thoughts with Bob, or with myself, by commenting. It’s appreciated.]

It was already hot at 10 o’clock on a mid-June morning when I stepped onto the North Country Trail. I pulled the trail register out of its box and perused the entries of the last few months. There it was– “Going for a short walk on the longest trail. Bob S.”– scribbled from my last visit a few weeks before. I’d appropriated the phrase from the proprietor of this blog from a post of several years ago– it’s become my standard tagline when on the NCT.

As I walked downhill to the small stream that flows into the Allegheny Reservoir, an ovenbird scolded me, upset at my intrusion. Tenkara rod in hand, I cautiously approached the little pool with a downed log spanning its width. I tied on one of my BOB (Black on the Bottom) beetles and cast it upstream of the log. The fly’s plop was quickly followed by a miniature explosion, and moments later a plump wild brookie was in my hand. As I slid him back into the water, the rollicking song of a winter wren tumbled down to me. I’m not sure if he approved of my piscatorial pursuits or not, but his beautiful trill was sweet punctuation to the trout’s momentary capture.

First, I should explain how I came to own a tenkara kit. I’d known of tenkara for several years and it seemed like an interesting, if unnecessary, method of fishing. I’d been searching for the ideal small-stream, minimalist system for a while. I wanted to get back to my roots of bushwhacking small, sometimes tiny, trout streams that require simplicity and the ability to move fast and light. When I found a complete kit on a popular retailer’s website for next to nothing, I bought it, figuring I could sell the thing if I didn’t like it. Nothing ventured, nothing gained, right?

For those unfamiliar with tenkara, it’s a form of traditional fly-fishing practiced in the mountains of Japan utilizing a long, reel-less rod (sometimes in the 11-15 foot range) usually of bamboo, along with a fixed length of furled horsehair line. The fly line is attached to a short piece of line called a lillian that’s bonded permanently to the rod tip. The lillian resembles modern fly line backing and has a knot tied at its terminal end. To this, the angler attaches the fly line using a simple girth hitch. The customary flies are called kebari and resemble a standard soft-hackle or spider, with the exception of the hackle being tied in reverse so that the feather tips extend over the hook eye. Apparently, the word tenkara translates to “from Heaven.” 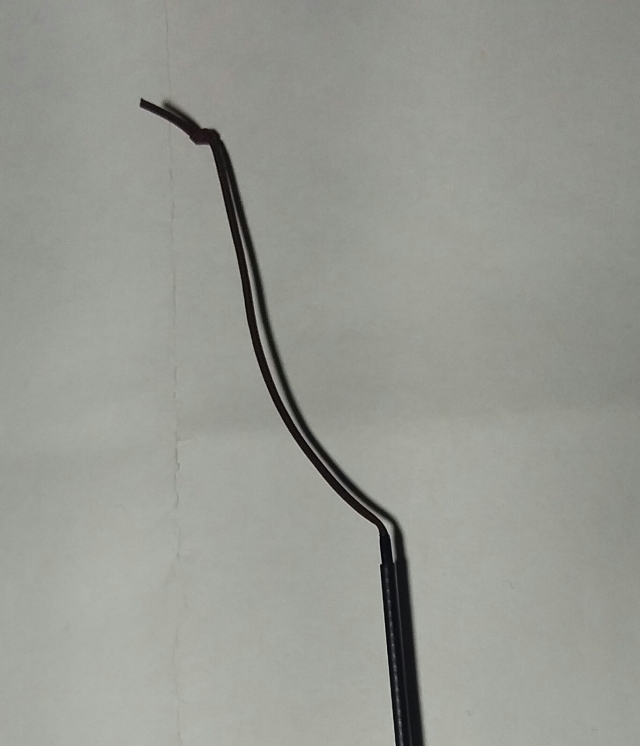 Tenkara fishing was relatively unknown in the western world until about a decade ago, when several U.S. companies like Tenkara USA and TenkaraBum started manufacturing and marketing rods, lines, and relevant accessories. Unlike traditional bamboo rods, modern tenkara rods are made of graphite. They are light, telescopic instruments that can be reduced to a fraction of their extended length. Mine collapses to about 18 inches. Modern lines are generally available in a few different configurations. My set-up came with a 12-foot level floating line with the standard PVC coating that regular fly-lines feature. Level fluorocarbon lines, often in bright colors serving as indicators, are popular too, and are reputed to be easy to cast. Also available are furled mono lines that mimic the delicacy of the old horsehair line, albeit in material that requires less care.

Tenkara rods are not rated in the standard weight system that most fly-fishers are familiar with. Instead, they incorporate a somewhat esoteric, fractional method that determines the flex of the rod. My rod is rated as a 6:4, meaning that the butt flexes at a 6 while the tip flexes at a 4. Admittedly, I don’t fully understand the system and don’t really care, for now. It’s at least as subjective as the usual fly-rod weighting system. Perhaps if I fish someone else’s tenkara rod with a different rating and like it better than mine, the light bulb will go on– “Jeez, I should have got a 7:3”– which, of course, would be another excuse to spend more money on fly-fishing gear.

As tenkara evolved in the Japanese hills, the prevalent method of fishing was to cast the unweighted kebari flies into likely holding water as one worked upstream, a technique similar to the modern small-stream practice. A small long-handled net can be employed to help land the fish, since there’s no way for the angler to take in line except by holding up the rod behind one’s head. Standard tenkara practice seems pretty set in its way. The kebari fly tends to float until saturated, then sinks just under the surface– a deadly method regardless of fishing style.

I tend to eschew traditional kebari, and fish a range of standard flies instead: parachutes, terrestrials, the occasional weighted nymph, and even small streamers. Not that I feel kebari are inferior to the more common flies, but some of the Western patterns seem more versatile, given differing water conditions. I’d begun to experiment with various line configurations as well. I quickly discovered that the 12-foot line that came with the kit, plus two feet of tippet, was overkill for the small streams I intended to fish with the tenkara rod.

Given that my rod is relatively short at eight feet, I first attempted to remedy the problem using a standard 9-foot leader attached to the lilian. This worked a little better, but I soon made a 4-foot section of level 50-pound test mono into a line and attached a short leader to it. The result improved my casting range and accuracy as the level line transmitted more energy to the terminal end. For next season, I’m thinking about making a furled leader out of mono, as I’ve read that it could give both delicacy and ease of casting. 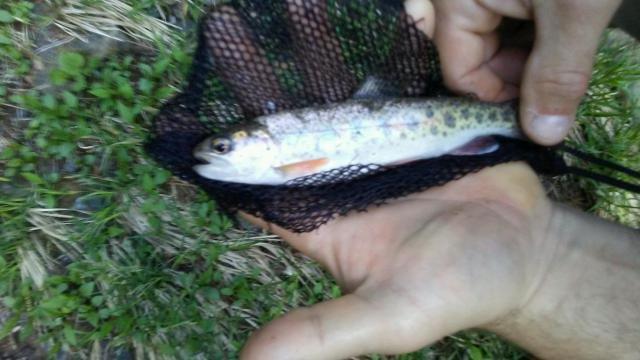 My initial experiences with tenkara were a little disappointing until I spent a full season of fishing it. In truth, I’ve become enamored of tenkara as a small stream method. In a catch-22, of sorts, tenkara’s disadvantages are the same aspects that make it fun and easy to fish. The lack of a reel, which makes it streamlined, can be problematic when trying to land a fish, especially larger ones over a foot long. It can take a lot of rod manipulation to get yourself into position for the fish. In this case, a long-handled net would be useful. Also, without a reel, the storage of line when moving from spot to spot can be a pain.

Ingenious solutions to the problem can be found on the internet, though, and a quick search will provide several options. I just wrap the line and leader around my hand, but I’ll explore some alternate methods for storage. Casting the rod is essentially the same as with any other fly rod, but there is a bit of a learning curve. Because you can’t shoot line, it takes some practice to land the fly on target– a tight loop helps greatly with accuracy, of course, and it can be tricky to master on a static length of line. Other standard casts for the small stream still apply: the bow-and-arrow cast, roll cast, even some elemental switch and spey casts, if you’re so inclined.

I’ve met only one other tenkara fisherman on stream and just a few others who seem to know about it. Some folks deride tenkara as an inferior method, calling it “dabbing,” or worse. The late, great Lefty Kreh himself once said, “Tenkara is a fad, and won’t last long,” though I understand he later came around. On the other hand, fly-fishing notables Craig Matthews and Yvon Chounaird have embraced and promoted the techniques through their respective businesses.

To me, tenkara resembles the kind of fishing that Izaak Walton and Charles Cotton describe in The Compleat Angler, and it might just be the ultimate small stream method. It’s light-weight, packable, requires a minimum of equipment and, most importantly, is fun to fish. I’m planning on doing a solo hike this spring along the hundred miles of Allegheny National Forest on the North Country Trail, and my tenkara rod will be making the trip with me (you don’t go into the woods on a trail that crosses several dozen trout streams and fail to bring a fly rod, do you?). I’m looking forward to trying out some different gear  and rigging operations to make it even more pleasurable and easy to fish.

On one of the last fall days with t-shirt warmth, I spotted a trout rising and cruising where the little brook ran into the lake. Sneaking into casting position, I saw the trout spook and shoot into deep water of the lake. “Blew that,” I thought, but what the heck… I placed an upstream cast where a riffle traced its way across a small submerged brush pile. The parachute landed where I wanted it, and Bam! A 9.5-inch Salvelinus fontinalis rewarded my efforts.

My biggest wild brookie of the year was admired and released. Chalk up another one for tenkara! 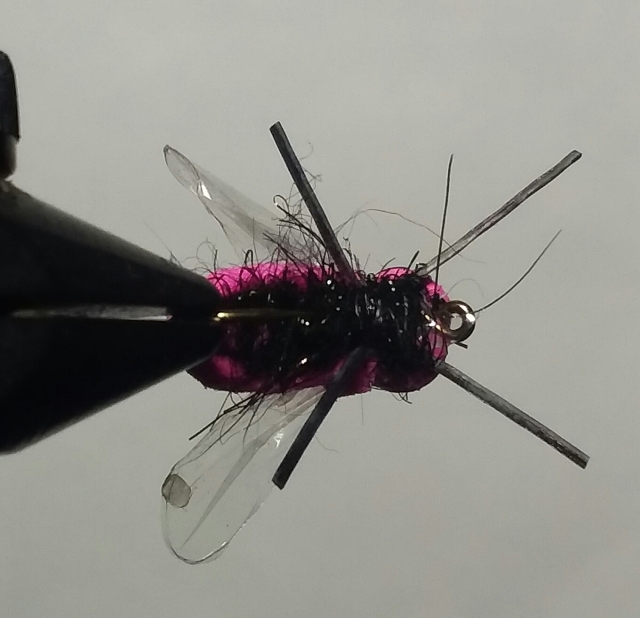 Welcome to Rivertop Rambles. This is my blog about the headwaters country-far afield or close to home. I've been a fly-fisher, birder, and naturalist for most of my adult life. I've also written poetry and natural history books for thirty years. In Rambles I will mostly reflect on the backcountry of my Allegheny foothills in the northern tier of Pennsylvania and the southern tier of New York State. Sometimes I'll write about the wilderness in distant states, or of the wild places in the human soul. Other times I'll just reflect on the domestic life outdoors. In any case, I hope you enjoy. Let's ramble!
View all posts by rivertoprambles →
This entry was posted in Uncategorized and tagged Allegheny River, Bob Stanton, brook trout, environment, fishing, fly-fishing, hiking, history, nature, tenkara, tenkara rods, traditions. Bookmark the permalink.

18 Responses to A Tenkara Treatise (or Something Like It)