Close Encounters of the Western Kind

Posted on August 10, 2018 by rivertoprambles

Fortified by our recent finds in Yellowstone country, my wife and I continued on our homeward route through northern Wyoming, drawn by the geography and myths of the land, toward Devils Tower and South Dakota’s Badlands. I was looking forward, as well, to a stop for trout in Wisconsin’s Driftless country, but that would have to wait for a while. The unpeopled spaces and the wild dimensions of Wyoming held us in thrall. 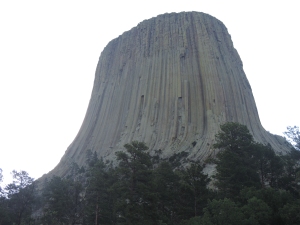 Devils Tower rises dramatically from the valley of the Belle Fourche River in the Bear Lodge Mountains of Wyoming, an igneous butte that stands 867 vertical feet from base to summit. The Tower, long considered to be a sacred place by Native Americans living in the region, is comprised of fluted columns of stone with hundreds of parallel cracks from top to bottom. Climbers are drawn to the Tower from around the world.

In 1906, Devils Tower became the first national monument when President Roosevelt officially recognized its significance in the landscape of America. Long before that, the great formation had played a part in the sacred rites of indigenous people such as the Kiowa and Lakota Sioux. Native American ceremonies continue there today, especially during the month of June. 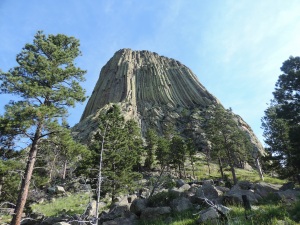 The Tower, an eroded mass of igneous rock, had uplifted from earth some 60 million years ago as magma rose through layers of sedimentary stone, eventually eroding into what we saw today– a huge green-gray butte ablaze with white feldspar crystals in the early morning sun. As we walked around Devils Tower on the 1.3 mile trail developed by the Park Service, and as we poked in and out of the scree, we felt humbled and in awe of Earth’s tremendous powers.

As a fly-fisher I could look up at the vertical columns of six-sided stone and be reminded somehow of a tapered bamboo fishing rod, hexagonal and exquisite in design. As a birder, I could peer at the upper heights and summit of the rock and see the flights of peregrine falcons (and competitive prairie falcons, too) that nested there and fed on the numerous rock doves of the Tower. As tourists, we might have been reminded of the Indian legends that connect with the origins of the place… 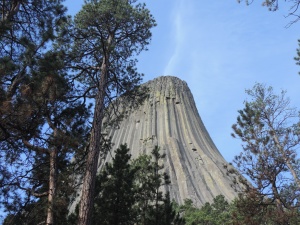 Devils Tower, in the years following the debut of the movie “Close Encounters of the Third Kind” in 1977, saw a big increase in tourism at its site. I’ve never bothered to watch the movie, myself, but observing several rock-climbers working slowly toward the summit on a beautiful early morning in July, I could understand how the Tower was appealing for the narrative of a tale in which aliens made contact with the common folk of planet Earth. 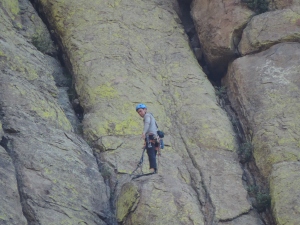 Just before entering the South Dakota Badlands for our second visit to the national park, we stopped and spoke with a Native American artist who was working a wind-swept post near the southern sector of this broad American landmark. We enjoyed a friendly discussion of social and political matters, as well as the craftsmanship involved with his trade. My wife bought me a lovely gift– one of the jeweler’s handmade “charms,” an elk tooth that I wear around my neck to keep me close to the Western spirit. 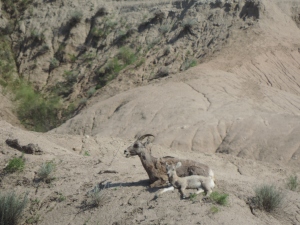 We made a long drive through the Badlands. First of all, I saw a burrowing owl perched on a fence post, and it seemed to say, Come along and fly Our Way. Pronghorns were encountered, lots of them, followed by some bison and, perhaps most interesting of all, groups of roving Rocky Mountain sheep. As for the landscapes that contained us all in a great variety of arid forms and color, they really have to be seen in person to believe the beauty of their “alien” character. 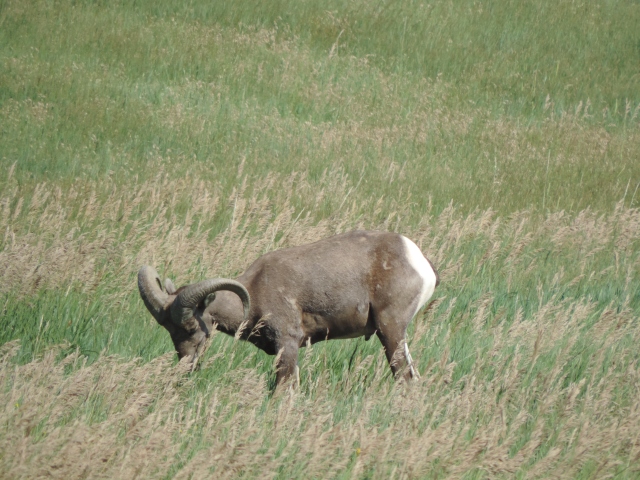 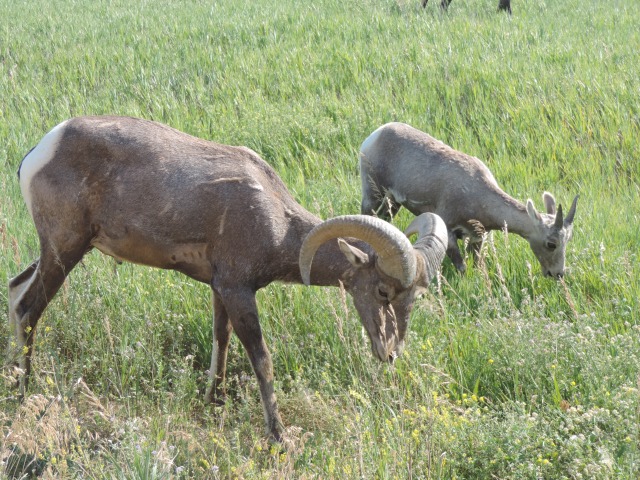 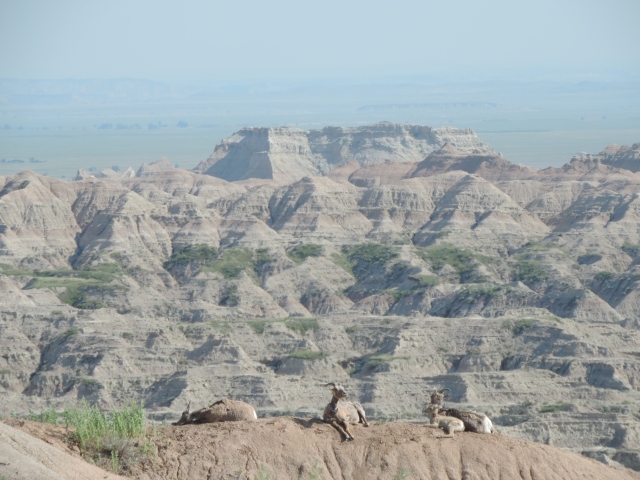 note the sheep in the foreground… 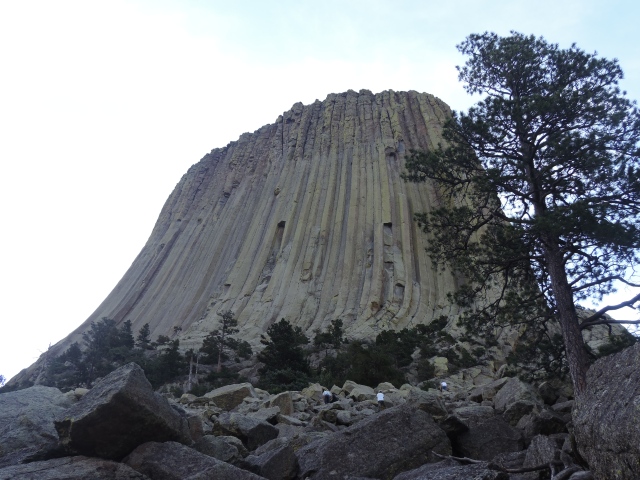 Welcome to Rivertop Rambles. This is my blog about the headwaters country-far afield or close to home. I've been a fly-fisher, birder, and naturalist for most of my adult life. I've also written poetry and natural history books for thirty years. In Rambles I will mostly reflect on the backcountry of my Allegheny foothills in the northern tier of Pennsylvania and the southern tier of New York State. Sometimes I'll write about the wilderness in distant states, or of the wild places in the human soul. Other times I'll just reflect on the domestic life outdoors. In any case, I hope you enjoy. Let's ramble!
View all posts by rivertoprambles →
This entry was posted in Uncategorized and tagged aliens, Badlands, birds, close encounters, Devils Tower, geography, national monuments, Native Americans, nature, Rocky Mountain sheep, tourism, travel, wildlife. Bookmark the permalink.

16 Responses to Close Encounters of the Western Kind