The work week was winding down; I was standing at the check-out counter with a six of a favorite IPA, thinking of the fly-fishing prospects for the weekend and a slew of odd jobs that required doing before the long trip West beginning June 22. A couple of young guys stood behind me, waiting to pay for their own quantities of a very popular “Lite.” I tried to ignore their commentary on what must have been an attractive female in the store, but when I heard a fella say, “Old Man really knows good beer,” I looked back at them and said, “You guys talking ’bout ME?”

“Yeah,” said one guy, “I like your taste in beer.” Now, I really don’t mind being called old. I’m rather used to it. But I’m glad these whippersnappers weren’t being facetious about my choice in brews. I checked myself to make sure my ears were on straight and that I hadn’t heard, “Old Man doesn’t know shit about good beer.” 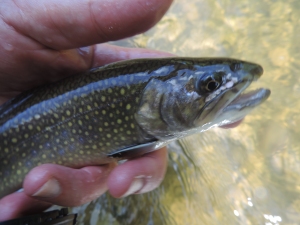 I didn’t have to raise my macho timber. I didn’t have to make a fool of myself by saying, “Listen punk, if you wanna step outside, me and my IPA will kick your Lite Beer ass!” Instead we had a brief and sunny rap about alternatives and new choices that we make while forking up our hard-earned dollars. After that, maybe the world was just a little bit brighter. Who knows. 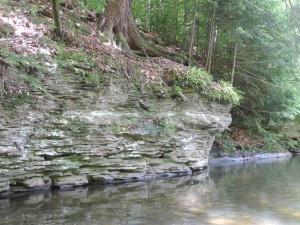 Actually the comment at the beer check-out made me feel more purposeful. Old age is never easy, but confidence is reassuring, especially when considering other more difficult choices that we make, those paths we’ve chosen to walk on into the future.

I’d taken a day from work to fish on Kettle Creek and to experience the Sulphur and Slate Drake hatches (not the strongest I’ve ever seen but satisfactory nonetheless). Then I’d walked into the back country of a tributary where the brook trout were willing to take almost any dry fly pattern as long as my approach was quiet and respectful. I would also fish an upper stretch of Cross Fork Creek and find it pleasantly productive.

I was making progress in my preparation to see and fish great rivers in Colorado, Wyoming and Montana. Once again I heard “Old Man really knows good beer.” I took it to mean more than simply a supermarket choice.

If all goes well, I’ll hit the South Platte and Frying Pan in Colorado. My wife and I will tackle a mountain peaking at 13,000 feet, but we’ll probably stop at the lake with cutthroat trout. If not now, when? We’ll move on to Wyoming’s Snake, Greys, and Gros Ventre rivers near the Tetons. We’ll try Slough Creek, once more, where the grizzly bars roam, and do a follow up on classic Montana streams, and maybe a few surprises. 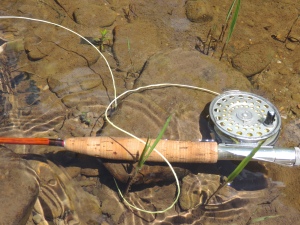 I don’t plan a strict itinerary. If an opportunity presents itself, I move toward what interests me, based on past experience and what may come of it. Financial and temporal limitations have to be considered, of course. But if I get the green light and my body says go, I’m set.

When my wife called me to dinner and I heaped the plate with fried catfish, seasoned crispy cauliflower and lemon-spiced arugula, I tasted everything with delight. The cold IPA was good accompaniment, but the dinner overall was surpassing.

It inspired me to take an evening hike up Dryden Hill to check on the fields with their bobolinks. I’ve always loved these interesting blackbirds and their bubbly song, but unfortunately they were flying low and in the distance this year. Returning down the hill, collecting some trash along the way, I paused at a clearing and listened to a wood thrush piping, and a young red fox barking harshly from a ravine. A barred owl hooted from somewhere in the valley. Then I heard a different song… 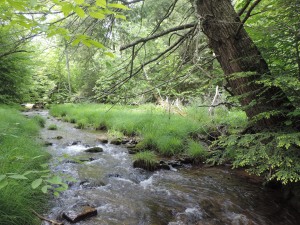 I hadn’t exactly given up on hearing whip-poor-wills in the East but, frankly, their numbers seem to be diminishing, and I hadn’t heard or seen one in 38 years, since my days of living near the Blue Ridge Mountains. I had hopes of encountering them again, especially since Bob Stanton played a recording of one while we were fishing on Slate Run a couple years ago. Earlier, Bob had found a whip-poor-will somewhere near his home in northern Pennsylvania. And now I was hearing one again.

Whip-poor-will, whip-poor-will…, on and on. I listened and followed as the bird moved slowly down the valley toward my house. Eventually the bird crossed the creek and started up the other hillside with its lush green forest. Losing auditory contact, I was nonetheless elated at my rediscovery. Walking toward the house as night closed in, I was about to enter when I gave one final listen. There it was again, the calling from the distance…

bobolink fields forever! (I’d like to say, but the turbines are coming soon…)

Welcome to Rivertop Rambles. This is my blog about the headwaters country-far afield or close to home. I've been a fly-fisher, birder, and naturalist for most of my adult life. I've also written poetry and natural history books for thirty years. In Rambles I will mostly reflect on the backcountry of my Allegheny foothills in the northern tier of Pennsylvania and the southern tier of New York State. Sometimes I'll write about the wilderness in distant states, or of the wild places in the human soul. Other times I'll just reflect on the domestic life outdoors. In any case, I hope you enjoy. Let's ramble!
View all posts by rivertoprambles →
This entry was posted in Uncategorized and tagged beer, birding, bobolinks, choices, fly-fishing, friendship, hiking, knowledge, nature, old age, Rocky Mountains, travel, whip-poor-will. Bookmark the permalink.