Posted on October 24, 2017 by rivertoprambles

About 50 local and regional breweries, plus a few wineries and distilleries, were recently represented at the Swain, New York Ski Center, and the tasting was a lot of fun. To enter, you pay the equivalent of five six-packs of “quality” big-name beer for a tasting glass and a wristband, then you’re in for a fast evening of unlimited variety in food and drink, plus music, dance, and frolic. You promote the foundations of hand-crafted brewing while staving off the crush of Lite-Beer culture with a dash of merriment and revolution. 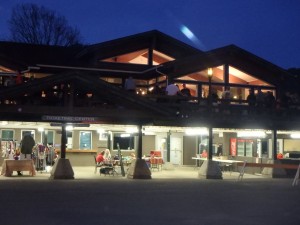 Along with wife and daughter, I enjoyed myself despite a bit of pressure to socialize and to pretend that angling didn’t much matter (till the morning when I planned to head north for a joust with salmon and perhaps large browns). The beers were cold and very tasty overall, especially in the first hour of mixing through the vendors, and as long as I didn’t have to over-indulge a share of flavored exotics or the upstart brews with a high ABV. 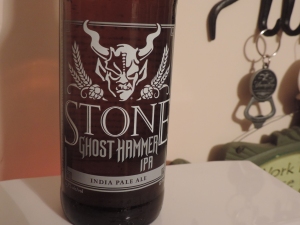 here’s one that I drank at home

Most of the food was extra, but the games and music, and even the socializing indoors and outside of the ski center, were rewarding and went to some good somewhere in the universe. I’ll have to give my daughter credit for the foresight in reserving our sleeping quarters at a lodge next door. It saved us from having to drive off when the music stopped and the vendors closed shop, and it made our exit safe and happy. 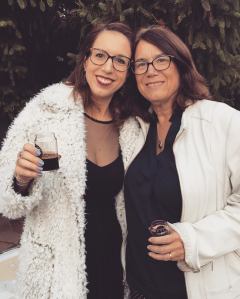 Quick transitions from the human world to the wild and woolly can be challenging, of course, and my overnight shift from brewery student to fisherman was less than smooth, but at least I was pain-free when the dawn spread out its rosy fingers.

Autumn rains had been minimal, so far, but the northern creek had a decent flow and clarity. Although various anglers were out in force, I found some quiet water where arriving chinooks could be noted in their upstream journey or, within the deeper pools, circulating near established redds. 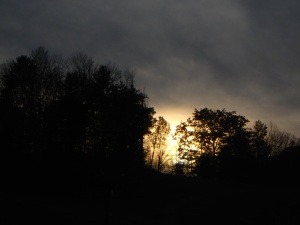 the sun went down like a good stout beer

I don’t know if there’s a parallel between the small-scale brewing of beer and the craft of catching over-sized fish with a fly, but if there is, then it’s a subtle one. To present a fly to a fresh-run adult salmon in a way that you can hook it legally and then land the 15 to 20-pounds of explosive energy isn’t easy, but when it’s done correctly it can be rewarding (and exhausting). 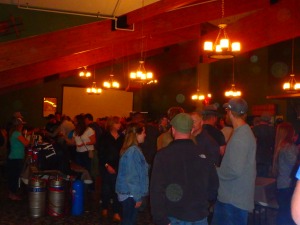 My hike led me into water with a lot of solitude, and each of the several fish I landed were initially hooked with just a pass or two of the fly. But for each of the salmon that I landed, there were plenty of fish that had little or no interest in defending their territory with a strike, no matter what fly pattern was presented. As in the best of fishing for an end result, there were no guarantees this day, and the fun of being out there was an equal mix of trying and achieving. 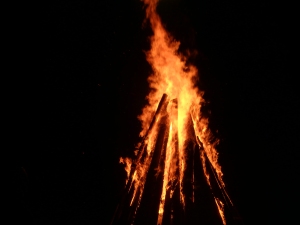 fire in the yard

I met Kevin, a fellow student of the tributaries and the artificial fly, who traveled up from Ithaca, and who volunteered to tail one of my reluctant salmon and then to photograph me with the fish before its ensuing release. It was good to talk with Kevin and to share experiences and hopes with him. I was reminded of the night before at the beerfest when we Franklins shared stories and experiences with three members of the John Bolger Band, from Rochester, New York, who could play BB and Albert King to Cream and Van Morrison with conviction. 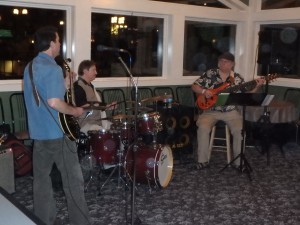 the John Bolger Band, minus keyboard

Any fraternal order of the sort quickly finds its counter-force in the wider world that’s out to score no matter what the cost. It’s a base world filled with mediocrity (at best). I found it on the salmon stream when I passed four guys fishing at one of the popular holding spots near the bridge. Six salmon lay sprawled on the bank, with two more in the water strung-up through the gills. Discarded tackle, water bottles, jackets, and empty beer cans (Keystone Light) were strewn near the fish. 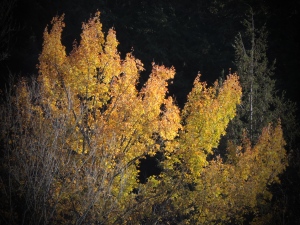 I don’t know if these guys, hunkered in the pool, were fishing legally or not, but my experience told me not to look too closely. I’m not talking about class warfare here. The differences come down to the choices that we make. I could tell from the trucks that these guys drove, they probably had more money to pass around than I could ever dream of dealing with. Thankfully, I could drive away from them all, pleased to have enjoyed a pretty good day of fishing, and the finish to an even better weekend on and off the water. 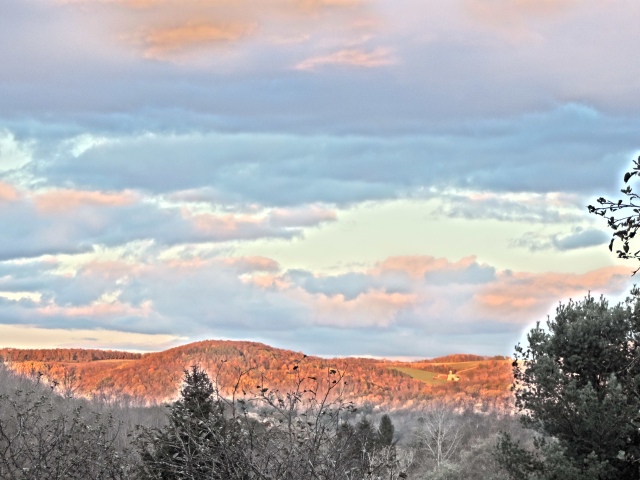 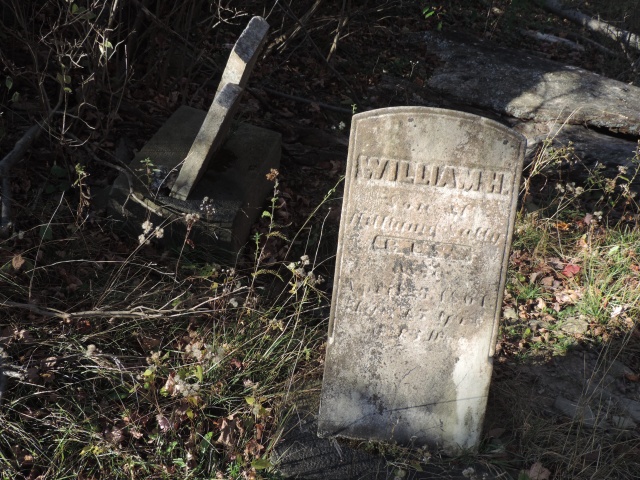 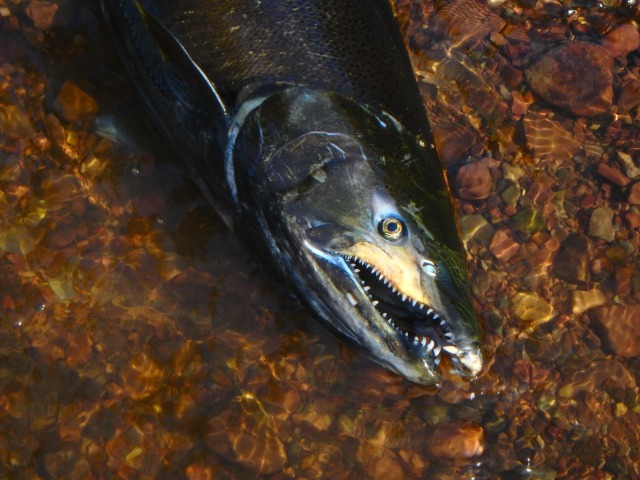 a dead fish that reminded me of Halloween 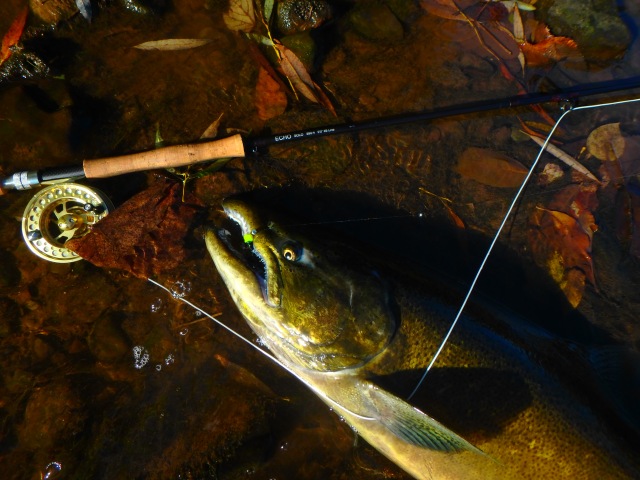 salmon CAN be taken with a fly 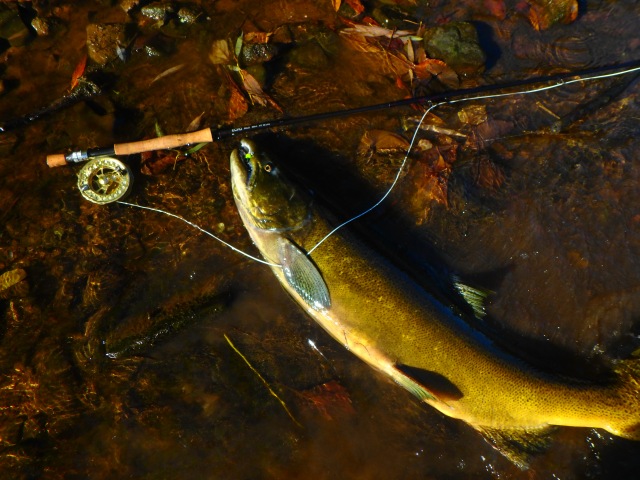 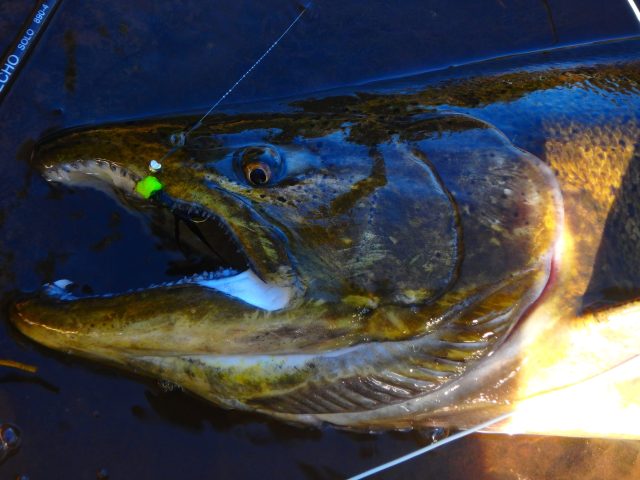 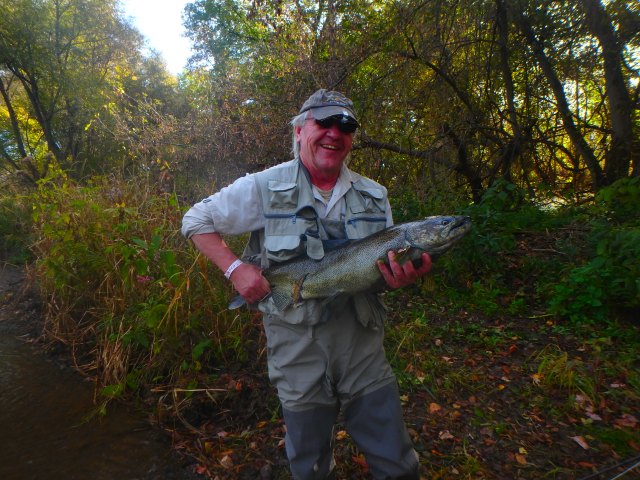 I’m thinking, what’s that John Gierach book where the author describes the East as the place where “all the fish are little.”

Welcome to Rivertop Rambles. This is my blog about the headwaters country-far afield or close to home. I've been a fly-fisher, birder, and naturalist for most of my adult life. I've also written poetry and natural history books for thirty years. In Rambles I will mostly reflect on the backcountry of my Allegheny foothills in the northern tier of Pennsylvania and the southern tier of New York State. Sometimes I'll write about the wilderness in distant states, or of the wild places in the human soul. Other times I'll just reflect on the domestic life outdoors. In any case, I hope you enjoy. Let's ramble!
View all posts by rivertoprambles →
This entry was posted in Uncategorized and tagged beerfest, brewing, Chinook, craft beers, culture, education, environment, fishing, fly-fishing, fraternity, friendship, John Bolger, music, nature, salmon, Swain, travel. Bookmark the permalink.