Posted on September 21, 2017 by rivertoprambles

The clouds were building over Cedar Run and its forested gorge. The afternon was looking good for fishing in the low clear water but the trout weren’t having anything to do with the several small flies that I offered them. I paused to take a picture of Joe-Pye-weed flowers blooming at head-level on the banks of Cedar Run. It was then that I saw the first Blue-winged Olives fluttering from the stream. I tied on an imitation of the little mayfly, and watched the brook and brown trout race out from their hiding spots to try their luck. 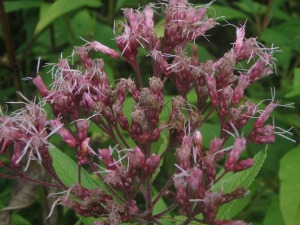 I was thinking of Joe Pye (Jopi) for whom the plant, Joe-Pye-weed, was named. Ostensibly, Joe was a Native American doctor living in New England during the 1800s. Not too much is known about him, so I had the chance to think creatively about his life as a healer known for applying extracts of Eupatorium purpureum and curing patients suffering from typhus fever and other ailments. 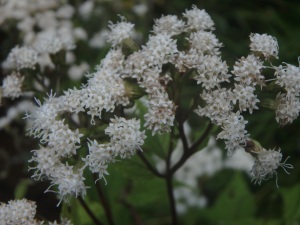 I was looking all around me but seemed to focus on Joe-Pye-weed near the stream. Butterflies cavorted there and also stopped for blooms of boneset, goldenrod and aster. I’d been standing still for minutes when I saw a bulge in the shallow pool. A very large brown trout was cruising slowly by. As the trout shifted downstream toward the far bank of the run, its wake cut cleanly through the riffles, and I uttered something like, “Holy Jopi!” 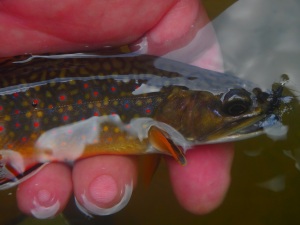 not a big guy, just a pretty one w/ Ant

I’m not one to call Joe Pye a “weed.” No. I call it a pale pink flower, an herb that grows well along streams and forest edges. The plant can grow taller than a pro-basketball player, and can make itself at home in flower-gardens. It’s said that if you crush the flower (please be kind), the fragrance that it gives resembles light vanilla. Man, I love vanilla.

Retreating from Cedar Run, I took the Joe-Pye essence with me to the hotel restaurant at neighboring Slate Run village. I forgot about it while I ate a tasty meal of salad, hamburger, and Two-Hearted Ale. When I left the bar environment I made a short hike into the Slate Run gorge. By the time I reached a favorite trout pool, I figured I had about an hour of fishing before the night closed in. 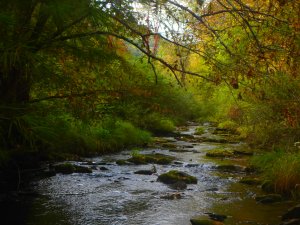 I was casting with my favorite fly rod, laying out a looping line across calm water to the faster riffles at the head of the pool, when I had the feeling that I wasn’t alone. Earlier I had seen a fly-fisherman passing from my view upstream but, with a quick glance up and down the run, all I saw now was another splashy rise-form given by a heavy trout. 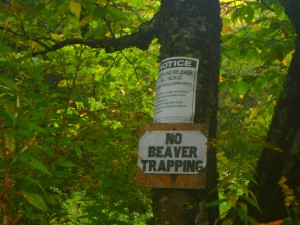 Several fish were feeding on the surface of the pool, but I couldn’t tell what they fed on. There were no obvious hatches occurring. No spinners graced the air above the stream. There might have been small ants or midges touching the water, but even my finest imitation didn’t get more than a quick inspection and a snub.

Something other than insects and trout food hung in the air. I turned sharply toward the pine and hemlock trees that stood behind me on the bank. There he was– a middle-aged angler sitting silently on a tree stump as he watched me in the run. I felt a little sheepish but gave the guy a wave, and the fellow kindly responded. 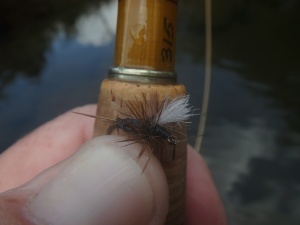 when I switched from an Ant to the larger R. G. King, the bigger brooks in Kettle Creek came out of hiding

I remembered Joe Pye. Up to this point in the day, it had seemed like the Joe-Pye-spirit was calling me to the dance. Now I stepped back from the autumn flowers and waited for some words to leave my mouth. I made a few more casts to the head of the pool and watched the drifting fly. 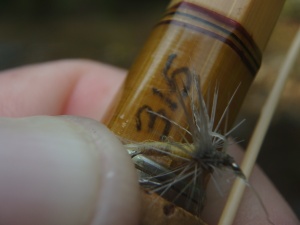 I turned quickly toward the fisherman on the stump and said, “How did you do downstream? Any luck?”

I made another cast, waited a minute, then found a way to ask a final question: “Would you like to fish this pool? The trout are picky as hell, but you’re more than welcome to try.”

“No. No. I just like watching someone who knows what he’s doing.” 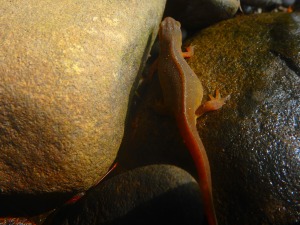 the newt knows what it’s doing…

I was speechless. I glanced at the trees across the head of the pool. Was there someone in there unbeknownst to me? Another fly-fisher who this guy was watching? Somebody who knew what these Slate Run browns were dining on, who knew what he was doing?

I just waved and went on fishing, and several minutes later the tree-stump sitter rose and yelled, “Good luck!” 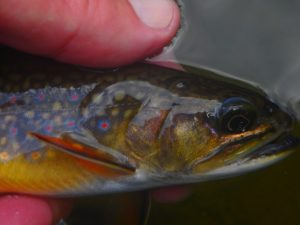 the brooks are getting active but the streams remain quite low

It might have been an incarnation of Joe Pye, someone other than myself, who shouted “Thank you!” in return. I don’t know. September nights come quickly to a trout stream in the gorge. 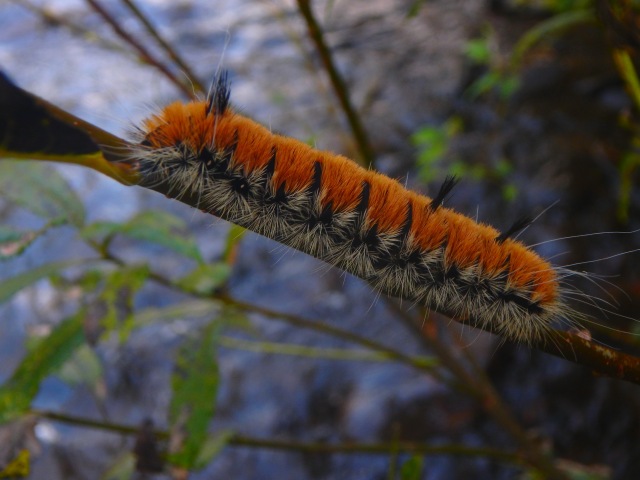 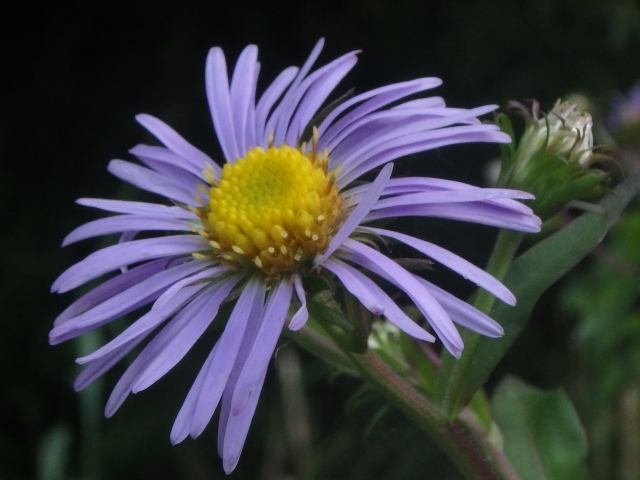 Welcome to Rivertop Rambles. This is my blog about the headwaters country-far afield or close to home. I've been a fly-fisher, birder, and naturalist for most of my adult life. I've also written poetry and natural history books for thirty years. In Rambles I will mostly reflect on the backcountry of my Allegheny foothills in the northern tier of Pennsylvania and the southern tier of New York State. Sometimes I'll write about the wilderness in distant states, or of the wild places in the human soul. Other times I'll just reflect on the domestic life outdoors. In any case, I hope you enjoy. Let's ramble!
View all posts by rivertoprambles →
This entry was posted in Uncategorized and tagged Cedar Run, creative writing, fly-fishing, good luck, Joe Pye, Joe-Pye-weed, narratives, nature, September photos, Slate Run, vanilla, Walt Franklin, wild trout, wildflowers. Bookmark the permalink.