Posted on September 15, 2017 by rivertoprambles

Someone recently asked if I could do a small post on the Adirondack fishing scene of late because he hadn’t been able to get up into the mountains for a while. I thought it over and decided I could probably do that even though my late-August visit to the West Branch Ausable River didn’t leave me much to write about, other than what you might have seen on my previous post.

The Adirondacks form the premier wilderness region of the Northeast and the Mid-Atlantic states. It’s an eight-hour drive from my home to the Lake Placid area of the Adirondacks, so I don’t often visit the mountains, although I’ve hiked and fished a fair amount of them over the years… On this occasion I could fish the West Branch only for a few days of early morning and evening hours (plus a non-productive midday venture). photo– Wikipedia 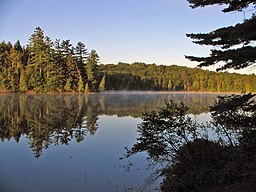 I still had my earlier, western trip in mind, but found that fly-fishing on the West Branch was a good way to help me get refocused on my home ground. There were fires raging throughout the American West and there were major hurricanes brewing near and far, but my thoughts about the Rocky Mountains and the prairie came from a greener time when environmental stressors weren’t as obvious. These meditations balanced comfortably with what I saw while casting for trout in the boulder-studded Ausable.

So, I’m serving up a schizophrenic stew. I’m thinking Adirondacks… for which I’m lacking photographs… but sharing more pictures of the West. I’m living in the present, mostly, but still dreaming of the summer road. My god. I hope the stew is palatable.

The Adirondack Park of northern New York is a blend of wilderness and small town civilization, of mountain land and water, both public and private, now celebrating its 125th year of preservation. The park’s six-million acres of wilderness with private inholdings were rescued from the logging and the mineral-extraction industries of the late nineteenth-century.

The Adirondacks form the largest state park in America, a land mass larger than Yosemite, Yellowstone, Glacier, Grand Canyon, and Great Smoky national parks combined, and nearly half of it belongs to New York residents whose constitution protects it as “forever wild.”

There are no gates or admission fees to the Adirondack Park. The public is always welcome to hike, hunt, camp, fish, or otherwise enjoy the land for free. It doesn’t get much better than that. Many of us who have enjoyed the pristine Adirondacks or have known about them are grateful to those visionaries of the late 1800s who helped establish one of this country’s most storied environmental legacies.

When I visit the Adirondacks on a fishing trip, I typically head straight for the Saranac/Lake Placid area where I swing out to the West Branch Ausable River. I forego the comforts to be found there, the numerous motels, lodges and cabins, in favor of a simple tenting set-up on a state campground with easy access to the river.

This August I arrived there in the evening, pitched my tent, and bought some coffee at nearby Wilmington for an early start next morning. Then I hit the river, hoping to catch the “evening rise.”

The Ausable was typical for this time of year– low but rapid in the special regulations water found between the Flume and the access to the Whiteface Mountain ski area. Even with low water in this stretch, the Ausable has lots of rocks and boulders of assorted sizes making it fast and furious at times. Is there an American trout stream anywhere that’s more difficult to safely wade? Not in my experience (although the upper East Fork Bitterroot comes to mind…)

As long as you’re stepping carefully (think, wading staff), the West Branch is a friendly river, especially in late season. The Slate Drake mayfly (Isonychia bicolor) is hatching profusely in the evenings now and often carrying over through the morning hours. The fishing may be slower than in May and June with that season’s great variety of  hatches, but it’s often a lively occasion.

I had help from my friend, Walt McLaughlin, who came out from his home in northern Vermont. We enjoyed some interesting hours on and off the river. Though our catch was rather modest, there were browns and rainbows reaching the 15 and 16-inch mark. It was fun to watch these trout leap from the white-capped flow to grab a dry fly drifting past. It was good to release these fish (as required) to the tannic water in the early morning fog or in the last light of day.

Lake McDonald, near our campsite, GNP

Welcome to Rivertop Rambles. This is my blog about the headwaters country-far afield or close to home. I've been a fly-fisher, birder, and naturalist for most of my adult life. I've also written poetry and natural history books for thirty years. In Rambles I will mostly reflect on the backcountry of my Allegheny foothills in the northern tier of Pennsylvania and the southern tier of New York State. Sometimes I'll write about the wilderness in distant states, or of the wild places in the human soul. Other times I'll just reflect on the domestic life outdoors. In any case, I hope you enjoy. Let's ramble!
View all posts by rivertoprambles →
This entry was posted in Uncategorized and tagged Adirondack Park, Adirondacks, balance, camping, environment, fly-fishing, Glacier National Park, meditation, nature, photos, Rocky Mountains, travel, West, West Branch Ausable River, wilderness. Bookmark the permalink.