Of Grizzly Bears and Cutthroat Trout

Posted on August 21, 2017 by rivertoprambles

[In which Yellowstone National Park becomes a focus in the 4th part of my “Top of the Rockies” travelogue. I hope that you enjoy.]

The wide sagebrush spaces of western Wyoming finally narrowed in a series of canyons near the headwaters of the Snake River. In the mountain village of Alpine our motel was handily located adjacent to a fly shop and a rustic tavern. There I learned a little more about a subspecies of cutthroat trout, the Snake River fine-spotted, that I could cast for if I wanted to climb 18 miles of the neighboring Greys River (beyond the stocked fish and the dabblers) but, alas, time was running short. 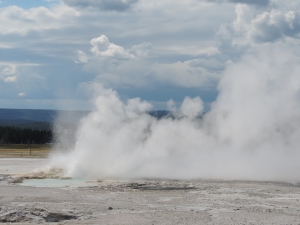 near the geyser belt, Yellowstone

I was intrigued but we needed to push on to Yellowstone in the morning so I added a Snake River tributary or two to my bucket list of streams if I ever come this way again. Native trout help me to define the country that I’m in, and here the native is the Snake River fine-spotted, one of a dozen subspecies of cutthroat trout, all of which are struggling to survive in the face of local and planetary threats. Since I don’t enjoy being a stranger to beautiful creatures, I wanted to return. 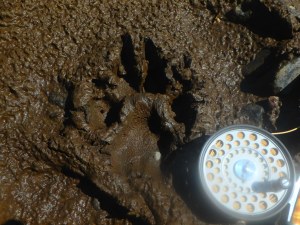 Along the Palisades Reservoir of the Snake, we saw the osprey (the fish hawk), lots of them. I counted at least seven active osprey nests along the shoreline of the massive waterway, each one constructed on cross bars of the powerlines we passed beneath. I had never seen such a congregation of this bird before. An adult bald eagle, too, flapped above the currents of the lovely South Fork Snake that looked good enough to stop and fly fish on. Then we passed the Henry’s Fork in Idaho, and the wheels of our machine just had to pause.

on the Henry’s Fork Snake

I bought a one-day fishing license at the anglers’ shop across from the Trout Hunter Lodge, remembering how, years ago, I had fished here at the Harriman Ranch in August and received a royal skunking. It was time to clear the slate. Intending to fish with dry Pale Morning Duns and Cinnamon Ants, I stepped into the famous “spring creek” river and went at it. If I was lucky I would catch a wild trout and then rejoin Leighanne inside the lodge for a great burger lunch with an IPA.

Well damn, I fished for two hours in the company of lazy white pelicans and caught not one but two fine rainbows in the tricky currents of the Henry’s Fork! I couldn’t have asked for more. 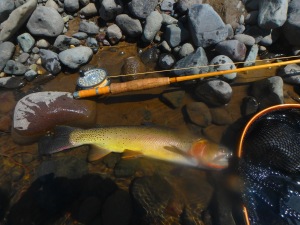 Edging our way past the tourists and the bison of Yellowstone’s Lamar River Valley, we stopped to watch a distant grizzly bear and cub. The Lamar River was flowing too high and muddy to fish, but Soda Butte Creek invited me for a late evening casting session. I finished a long day of travel with a leaping Yellowstone cutthroat that would measure 16 inches. It was getting dark and we had one more hurdle to accomplish.

All the camping sites inside the national park were occupied so we exited near Cooke City, Montana to find another place to crash. I had been here before, camping on a primitive mountain site a mile from the Soda Butte Campground where a fatal grizzly bear attack occurred in 2010, the night I was leaving the neighborhood.

On this occasion we didn’t have much choice. We paid for a woodsy, isolated campsite at Soda Butte where now the use of tents is not allowed. Only “hard-side” camping is permitted, in RVs and the like. We slept inside the car and locked our doors.

The next day, intending to fish a high meadow of Slough Creek, I got lazy and blew it off (unfortunately) but I sampled some alluring new locations on Soda Butte. The fishing was slow in the cold but clearing water of the bison fields and wolf escarpments but the trout I caught were nice ones. 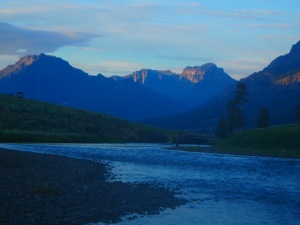 At the last stretch that I sampled, I saw a fine trout make an unsuccessful pass at a drifting Stimulator (as well as other patterns). I decided to hike upriver, fishing along the way, and then return to this trout when I was done and ready to quit.

The afternoon sun had grown quite hot when I returned to the site of my initial failure. I was tired but determined to give it another shot. I fished the undercut bank and log jam for about 10 minutes with several flies and had no sighting of the fish. Then, deciding to give the Cinnamon Ant one last cast, I dragged it from the current and… yeah… the fish was on!

I beached the trout and quickly measured it at 19 inches along the length of “Chester” the fly rod. As it swam off to its cold-water lair, this Yellowstone beauty seemed to thank me for being persistent and then letting it return. In actuality, though, it was an angler who owed some thanks– to a trout and a very special place in the world and, lest I forget to mention, to a patient wife who almost understands this crazy passion…. 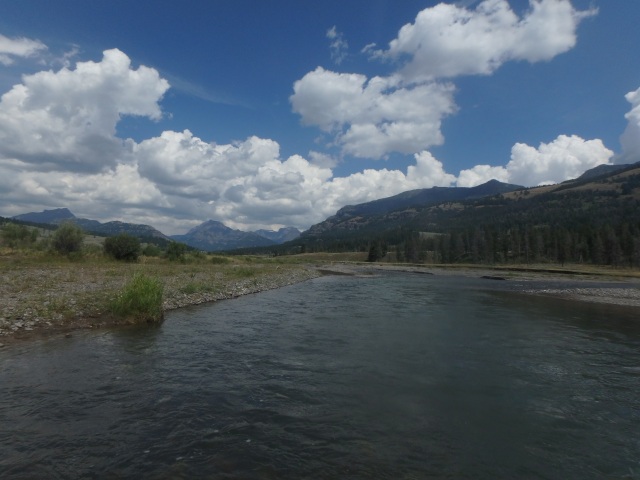 Welcome to Rivertop Rambles. This is my blog about the headwaters country-far afield or close to home. I've been a fly-fisher, birder, and naturalist for most of my adult life. I've also written poetry and natural history books for thirty years. In Rambles I will mostly reflect on the backcountry of my Allegheny foothills in the northern tier of Pennsylvania and the southern tier of New York State. Sometimes I'll write about the wilderness in distant states, or of the wild places in the human soul. Other times I'll just reflect on the domestic life outdoors. In any case, I hope you enjoy. Let's ramble!
View all posts by rivertoprambles →
This entry was posted in Uncategorized and tagged birds, camping, cutthroat, environment, exploration, fly-fishing, grizzly bear, Henry's Fork, hiking, nature, osprey, photos, Snake River, Soda Butte Creek, travel, Wyoming, Yellowstone. Bookmark the permalink.

18 Responses to Of Grizzly Bears and Cutthroat Trout