Dinosaurs on the Green

Posted on August 18, 2017 by rivertoprambles

It was a cool day with light rain showers as friends from Salt Lake City joined us for a cold-desert romp outside of Vernal, Utah. Emma and Brendan joined Brent, Catherine, Leighanne, and yours truly for a visit to the fabulous Quarry Building in Dinosaur National Monument (replete with walls of actual dinosaur remains unearthed by paleontologists)followed by a full day of hiking and exploration in remote northeastern Utah.

The beauty and geological complexity of this region found a showcase for us on the “Sound of Silence Trail,” a 3.2-mile loop through a “cold desert” habitat for many wild creatures such as golden eagles, mountain lions, desert cottontails, white-throated swifts, canyon wrens, lizards, and the occasional rock-climber such as ourselves. Brent, Leighanne and I had done this hike on a sweltering day some 20 years ago, but this was more comfortable. We had learned a few things from mistakes we made back then, and were now well-equipped to enjoy the desert solitude offered by a cooler morning and overcast sky.

With our desert hike complete, we traveled in two vehicles to a trail accessing Harper’s Corner look-out, a one to two-mile jaunt along a rocky spur to a point near the junction of the Yampa and Green rivers. The canyon views from Harper’s Corner are simply spectacular. Again it was a second visit for us, although Emma and Brendan, the folks from Salt Lake City, were new to Dinosaur in general and to the Green/Yampa river canyons in particular. For all of us, this high-country wilderness, bringing rushes of time travel to and from the far reaches of geologic history, was a humbling experience.

Sound of Silence Trail began in an arroyo

Back at our vehicles we gathered and lubricated our senses with a slug of cold water and some very tasty Scotch (I think it was) that Brendan happened to unearth. A Clark’s nutcracker, a black-and-white jay-like bird of the timberline regions first described by William Clark on the expedition of 1805, chattered and flew about the pines and junipers. After an excellent meal with local brews in Vernal, Utah (yes, the Mormon state does have such delights if you know how to find them), we said goodbye to our western friends and, next morning, Brent and Catherine began their own tour by revisiting Colorado. 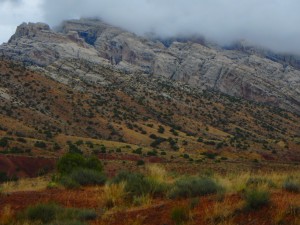 on the trail of Silence

Leighanne and I (not yet dinosaurs ourselves) departed from the vast national monument in search of the Flaming Gorge Reservoir and the famous tail waters of the Green. Armed with a new fishing license and an old desire to fish the mighty Green (sans guide and drift boat), I descended the steep canyon stairs and started off along the anglers’ trail down-river. Lucky for me, the sky was overcast and lightly raining.

I had just broken the “flip-focal” device that attaches to my fishing hat, so I couldn’t see well enough to tie on a small BWO to match the vigorous hatch that was occurring. I went the other way, casting a large dry fly and (more successfully) a #10 Pheasant-tail Nymph. While the violet-green swallows and white-tailed swifts were busy with the olive hatch, golden eagles were at play above the canyon, and an osprey, nesting on the nearby cliffs,  carried a large fish (probably a trout) low across the river’s edge. 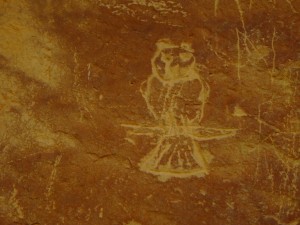 I decided I did pretty well for a first visit to the Green, catching several wild trout from the wide, deep waters of the canyon– a small brown trout, a “cut-bow” hybrid, and a 17-inch rainbow that fully exercised the Orvis Superfine rod and brought shouts of encouragement from anglers in a passing drift boat.

drift boat on the Green

It was a good way to bid farewell to Utah and to prepare for the wide open spaces of Wyoming.

my son climbs the slickrock 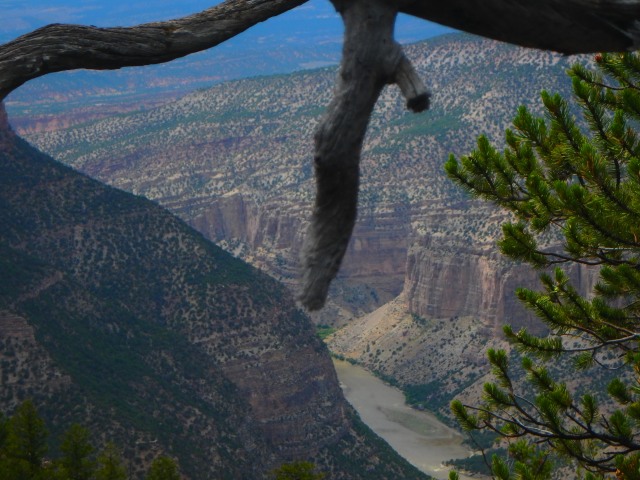 the Green down there… 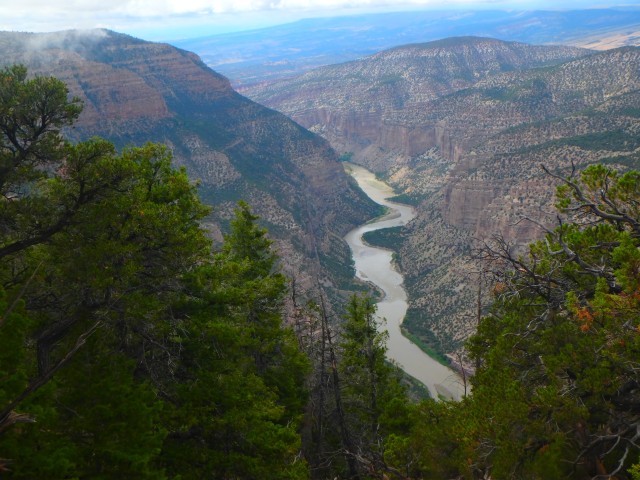 looking down from Harper’s Corner Lookout

Welcome to Rivertop Rambles. This is my blog about the headwaters country-far afield or close to home. I've been a fly-fisher, birder, and naturalist for most of my adult life. I've also written poetry and natural history books for thirty years. In Rambles I will mostly reflect on the backcountry of my Allegheny foothills in the northern tier of Pennsylvania and the southern tier of New York State. Sometimes I'll write about the wilderness in distant states, or of the wild places in the human soul. Other times I'll just reflect on the domestic life outdoors. In any case, I hope you enjoy. Let's ramble!
View all posts by rivertoprambles →
This entry was posted in Uncategorized and tagged birds, canyon, desert, Dinosaur, exploration, Flaming Gorge, fly-fishing, Green River, Harper's Corner, hiking, national monument, nature, photos, Sounds of Silence, travel, Utah, Yampa River. Bookmark the permalink.

16 Responses to Dinosaurs on the Green