Posted on February 26, 2017 by rivertoprambles

The weather and our wishes for a small retreat from winter seemed to coincide or to conspire neatly for several days. We headed south toward Chambersburg, Pennsylvania, not far from Gettysburg, and settled at the Inn at Ragged Edge where old-timers like my wife and I, plus relative youngsters too, could bask in romantic get-away. And sure, a famous trout stream or two beckoned from around the corner.

The old Victorian mansion called Ragged Edge has to be seen to be believed. We breezed right into it, with sunny weather, migrating birds, and temperatures in the high seventies. Our hosts at this “boutique bed & breakfast” were gracious and accommodating.

The food was delicious; our third-floor suite was clean and very comfortable; the furnishings and artistic appointments were extraordinary. Everything, from split-level patios and wrap-around porch to winding staircase and Steinway grand piano quietly boasted of contemporary and historical correctness. The fly-fishing was only fair but it was fun (I’m getting to that…).

This “summer cottage” of the railroad magnate, Colonel Moorhead Kennedy, was built around 1900, and to walk its nature trail along a lazy wooded stream (visible from the intricate windows in the house) and to browse among the quaint old chambers in the mansion is to meditate on southern history and cultural diversity. Leighanne and I relaxed and, of course, the nearby Falling Spring Branch beckoned every last fiber in the fly rod that I brought along. 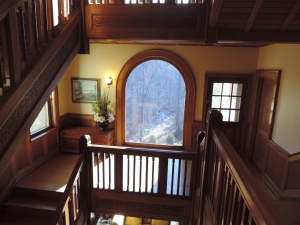 Colonel Moorhead Kennedy had been active in World War I and eventually functioned as a VP and President of more Pennsylvania railroads than I can wrap my head around, and he threw big parties at Ragged Edge. Early twentieth-century celebrities, bankers, presidents, Supreme Court justices, and generals attended his annual gatherings. The horse-and-carriage deliveries, the private railroad spur, the swimming pool, and the elaborate gardens and orchards were some highlights for this grandest home in Franklin County.

It wasn’t easy for a trout bum like myself to take in all this high-brow stuff but the recreational aspect of our stay helped to keep things in perspective. In addition to some fishing adventures, Leighanne and I visited a Peruvian restaurant, a brewery and a winery and other hotspots, so the weather was indeed a February treat.

Falling Spring Branch is a small limestone run, nearly as renowned as its sister streams the Big Spring and Letort Run, one of the few Pennsylvania waters capable of sustaining a wild rainbow trout population. It’s reported that some of the rainbows grow to outlandish sizes but I didn’t see many fish in my days of exploration here. It’s a difficult stream to fly-fish but I certainly enjoyed the challenge of casting on a small run filled with cress and silt and wild trout hiding from the sun.

Falling Spring has environmental issues but is benefitting from a lot of stream improvement projects headed by cooperative efforts of Trout Unlimited, local businesses and landowners. At my first stop here I walked toward a small bridge and a young guy with a fly rod working the water. There are catch-and-release/fly-fishing-only signs posted all over this stretch of water and at the bridge, but it was obvious that the angler was slinging a fat night-crawler to the edges of the watercress.

looking down from the back of Ragged Edge

The guy knew I was watching him and, in a minute of uncharacteristic behavior, I said nothing at all. I didn’t feel like starting a war this early in the game, and I watched him slink away downstream, hoping that he thought about his contrary actions though he probably wasn’t very capable. Luckily, I would encounter several others along the stream in the next couple of days who were different– friendly, ethical and stimulating conversationalists– like a ray of sunshine on a snowy day.

To fish this little stream is to walk along the ragged edge of lavish yards and gardens of cooperative residences in gentlemanly fashion– never mind those sudden (thankfully uncommon) moments when you sink to your knees in “quicksand” like some floundering idiot in quest of the Holy Grail.

I knew that fish do not come easily from Falling Spring Branch. I tried casting with scuds, streamer, dry fly #20 on 6x tippet, etc., and finally settled for just a small rainbow taken on an olive emerger. No great shakes, but I did better the next morning when, en route home, we stopped at Big Spring Run and I managed a couple of wild rainbows near the source of this well-known stream.

Although the sky was overcast and promising another quick change of weather, the songbirds were vocal along this clear, attractive waterway a few hundred yards below its major source. Even here, this limestone run has a greater volume of water than the 2.4 mile special regulations stretch along Falling Spring Branch. I quickly caught and released a couple of wild rainbows. I tried to hold up a pretty 13 or 14-inch trout for Leighanne to photograph but all she managed was a mediocre head shot of the fish.

My wife is a better romantic get-away partner than she is a fish photographer, but hell, we all know what these trout look like, and no one said it was going to be easy fishing on the pleasant banks of life’s ragged edge.

Welcome to Rivertop Rambles. This is my blog about the headwaters country-far afield or close to home. I've been a fly-fisher, birder, and naturalist for most of my adult life. I've also written poetry and natural history books for thirty years. In Rambles I will mostly reflect on the backcountry of my Allegheny foothills in the northern tier of Pennsylvania and the southern tier of New York State. Sometimes I'll write about the wilderness in distant states, or of the wild places in the human soul. Other times I'll just reflect on the domestic life outdoors. In any case, I hope you enjoy. Let's ramble!
View all posts by rivertoprambles →
This entry was posted in Uncategorized and tagged Big Spring, ethics, Falling Spring Branch, fly-fishing, get-away, history, Inn at Ragged Edge, Moorehead Kennedy, nature, Pennsylvania, photography, rainbow trout, spring creeks, travel, Victorian homes. Bookmark the permalink.

20 Responses to The Ragged Edge