Posted on August 29, 2016 by rivertoprambles

[The following is the first in a two-part series on a recent ramble through the Northeast Kingdom and the Green Mountain State (aka Vermont), with stops in the wild Nulhegan River Basin and, later, at the famed Battenkill. Stay tuned!] 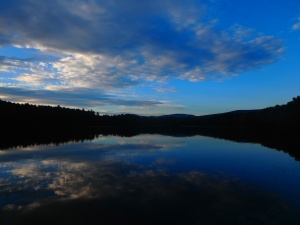 Spectacle Pond lies in the heart of the Green Mountain state’s Northeast Kingdom, a remote three-county area of Vermont where deep evergreen forests and glacial ponds and lakes cover the hills and valleys. Located near the modest and unassuming village of Island Pond (a former logging and railroading center now quietly accepting the tourist dollar), Spectacle Pond seems well-suited to representing the wildest and most remote section of this beautiful state. 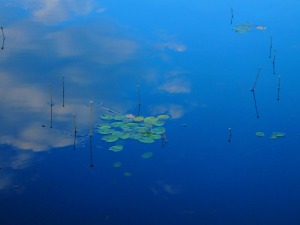 I found it interesting to read that in 2006 the National Geographic Society ranked the Northeast Kingdom “the most desirable place to visit in the U.S.” I’m not sure what criteria the venerable institution used to determine “most desirable places,” but I’m not prepared to argue the designation, only to explore the place according to my own interests.

The pond is actually a small kettle lake (where ice entrapped in glacial debris melted to form the present-day body) that remains largely undeveloped despite the presence of a state campground and a small campers’ beach with boat rentals. A boreal forest with balsam firs, red pine, and white birch trees surrounds the pond which is also noted for occasional moose visitations and for its loons that pierce the summer nights with avian equivalents of cries and laughter.

I camped out on the pond for several days and used it for my base to explore a little of the wild country to the northeast and southeast of Island Pond village. I would head out on the Nulhegan River Trail to fly-fish on a river I’ve been fascinated by ever since reading of it in my trusty Complete Book of Freshwater Fishing (Parsons) when I was just a teen, a life-long guide describing the Nulhegan as a river that “… Drain’s Vermont’s largest unpopulated area. Wonderful water.”

I camped out on the pond after a night of tenting at Watkins Glen, New York where I

had given a reading of poetry and prose to an appreciative audience and then listened to coyotes firing up the camp dogs with excitement. Next day, following a long drive to Spectacle Pond, it felt good to pitch a tent there and unwind.

Wild blackberries fruited only several feet away from my tent site and tempted an old naturalist at breakfast time, for adding to his caffeinated fare. The pond, itself, reminded me of what Walden Pond might have looked like to Thoreau while the writer worked and meditated on its shore. I even heard a train roll by one night, as was often the case when the author of Walden sojourned at his cabin site.

Although I looked for moose and saw only signs of this iconic bog and northern forest dweller (where its numbers are deemed the highest in the state, at more than one moose per square mile), I felt the presence of other spirits here. An osprey hovered with an eye for perch and pickerel; a squadron of common loons fished near the camp site and enlivened the nights with their sonorous, reverberant and haunting calls.

From my campsite I could look across the water to Indian Point and be reminded of a quote about the place taken from an old railroad guide of 1853: “… Marks of Indian encampments and of their trails through the woods still remain; and a point which makes out into the pond… bears evidence of its use as the seat of council fires. The rounded point, clear of underbrush and smooth as a shaven lawn, is overshadowed by a growth of ancient pines, forming a complete shelter from the sun, while on either side and in front, the sheltered waters of this miniature lake are the picture of calmness and repose.”

After taking several walks along the beautiful Nulhegan River (more on that in a future post) and especially before my departure to the tamer realms of Manchester and the Battenkill River, I thought about the residents of sleepy Island Pond. The people I met there were extremely amiable and helpful toward this first-time visitor from western New York. They seemed as modest and civil as the loons were wild and free.

All in all, the village of Island Pond and the wavelets of Spectacle Pond refreshed a summer-weary soul.

Welcome to Rivertop Rambles. This is my blog about the headwaters country-far afield or close to home. I've been a fly-fisher, birder, and naturalist for most of my adult life. I've also written poetry and natural history books for thirty years. In Rambles I will mostly reflect on the backcountry of my Allegheny foothills in the northern tier of Pennsylvania and the southern tier of New York State. Sometimes I'll write about the wilderness in distant states, or of the wild places in the human soul. Other times I'll just reflect on the domestic life outdoors. In any case, I hope you enjoy. Let's ramble!
View all posts by rivertoprambles →
This entry was posted in Uncategorized and tagged boreal forest, Island Pond, loons, Native Americans, nature, Northeast Kingdom, Nulhegan River, peace, photography, solitude, Spectacle Pond, travel, Vermont, walking. Bookmark the permalink.

An Arts-Filled, Tasty And Sometimes-Loopy Jaunt Through Life

Mindful, Seasonal Living in Middle England - with a family of seven

A blog about exploring the Pine Tree State and beyond

a blind writer's path to happiness

See She Flies And Writes

Reflections on the natural world outside our backdoor by Robert J. Romano, Jr.

Working to maintain Slate Run as a conservation project stream, with regulations to provide for the continuation of Fly Fishing Only

Things to do and see in New Mexico