Aftermath (There’s Something Funny Going On)

Posted on August 1, 2016 by rivertoprambles

(1) There’s something funny going on around here, something that will probably have a happy ending once the dust has settled. For example, the guys who have gutted our old kitchen and completely renovated the beast are likely to receive a company award for the best “Before and After Kitchen” of the year, if not the decade. 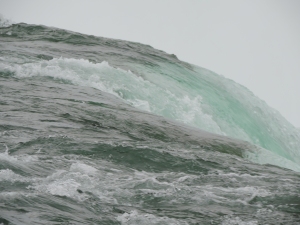 (2) There’s something funny going on around here, something that, unfortunately, doesn’t have a lot to do with trout fishing. It has more to do with heat and extreme weather conditions, like having a twister blow through my valley where there hasn’t been a twister in, how long, a thousand years, if ever?

(3) There’s something funny going on around here, something like giving a public reading from my books in Wellsville, N.Y., then going out and having a few beers with my brother. These events may have led to my waking up at 3 a.m. because the cat was barfing someplace in the hallway, which led to a broken toe because I jumped out of bed and crashed into some unforgiving piece-of-crap furniture. 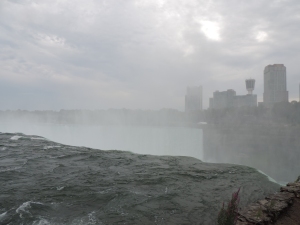 (4) There’s something funny going on around here, something like the big 60th birthday party for my wife when we had wonderful people visiting from far and wide, a few of whom performed a “rain dance” around our bonfire one night, a dance that, in retrospect, was probably over the top. We got our needed rain eventually, but we also got a breeze that changed our lives a bit too suddenly.

(5) There’s something funny going on around here, something like touring Buffalo and Niagara Falls with my son and future in-laws, eating the best Buffalo-style chicken wings and drinking craft beers, then standing near the brink of Niagara waterfalls listening to some guy chirping about all that water and how mankind, with its brain and technological prowess, can control that immense energy. Yeah, I thought, to a point. 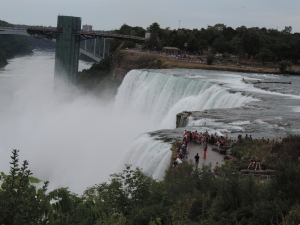 (6) There’s something funny going on around here, something like walking down to the beaver pond early in the morning of the day the storm came around, and meeting Andy there with his binoculars and a pitchfork. He was looking like the Mad Farmer of Nutville, so I asked him what the fork was for. 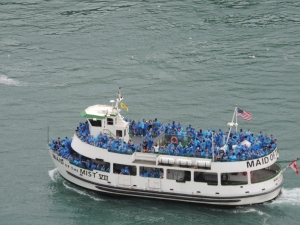 “Well, I was sitting here last night on my 4-wheeler, wondering what’s been happening to the young beavers, when one of the adults came up from the dam and charged me!”

I reflected, then, a little more about rain dancing and the power of Niagara Falls, not to mention the emotive state of pissed-off beaverhood. I remembered my brother’s comment that he’d begun rereading Bellows’ “Henderson the Rain King.” Stuff like that. 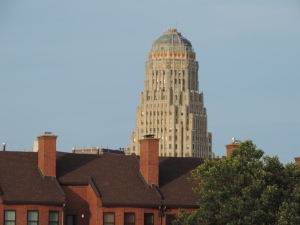 (7) There’s something funny going on around here, something like seeing a tornado, or panoramic wind sheer, come blowing through this place where there had never been one to my knowledge, where there had been little more than a forecast of a possible heavy storm. I hadn’t seen a wind like this in 35 years of living in Bootleg Hollow; I’d never felt an impact like this twister even though I once survived two years of living in Tornado Alley, South Dakota. 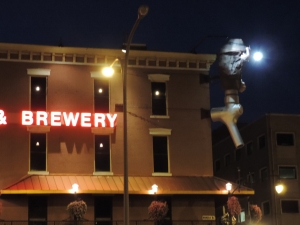 (8) There’s something funny going on around here, something that will have a happy ending once the sawdust settles and the final house repairs are done. Fortunately the last of our guests from the birthday celebration had departed from their lawn chairs two hours earlier and gone home; the final cups of coffee had been drunk in peaceful sun and shadow, and the stage had been reset. 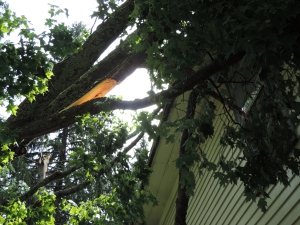 I was sitting here at the computer, thinking there was something funny going on in Greenwood Vale, when the woods out front began to roar– not like the proverbial lion but more like a giant waterfall. The trees put on their coats of darkness and began to bow… I’ve never really doubted the scientific claims that now (with climate change occurring globally) our weather events could be more and more extreme, and I wasn’t about to change my mind at this point.

Branches and lawn chairs blew across my window view. 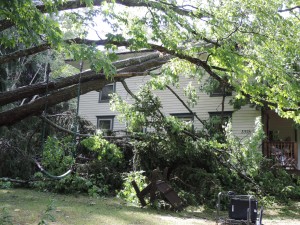 I had two Norway spruce trees in the front yard, both of them very healthy looking, each of them 100 feet tall. The top half of one spruce snapped free and crashed into one of my 70-foot sugar maple trees and, together, they slammed into my two-story roof just above my head where I had jumped up thinking, there’s something not quite right about all this. 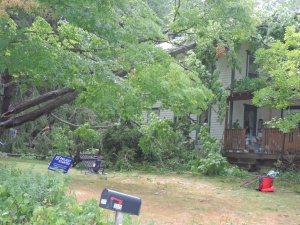 I was home alone with two frightened cats. The power had gone out, and I called for help. I got my help in spades– when the road from town was finally cleared of fallen trees and roof parts from a damaged barn. Later, I understood that there was something funny going on when, after paying for insurance years on end and not seeing any benefits, I suddenly had a reason to enjoy it. 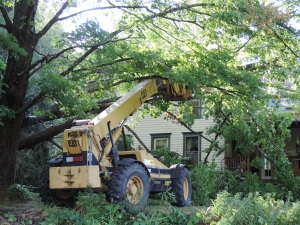 An amazing surgical operation involving heavy machinery and human expertise finally lifted the trees from the house. No one was hurt in any of this craziness. The holes in the roof had let in some rain that was needed more on the lawn than in the house, but our new kitchen (almost completed when the storm arrived) was spared, barely. 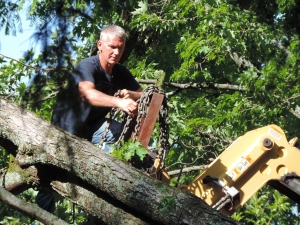 (9) There’s something funny going on, something like having to take a chainsaw to clear a pathway to the front door of your house, then spending the next seven days getting the home back into shape and clearing off the lumber. Thankfully, we had lots of help in all of this and, yeah, the twister could have been a real disaster. 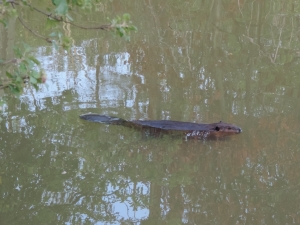 Our kitchen guy is up for an award, and I think he’ll get it. As for me, I’m up for a change of pace, as well… I wonder what it’s like to drift a dry fly on a sparkling mountain current with nothing too funny going on.

[P.S., I had good dry fly Anting on the Wiscoy… Stay tuned for more on this!] 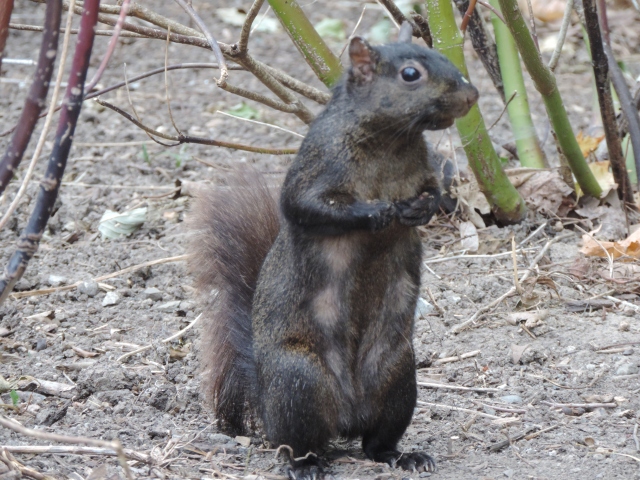 there’s no room for prejudice at this tourist attraction… 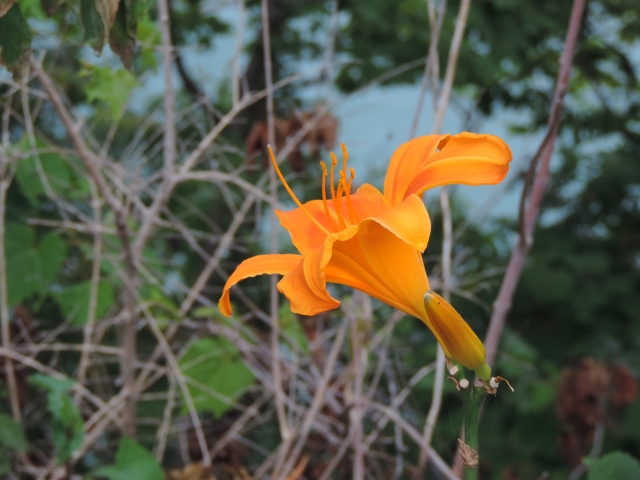 lily of the falls… 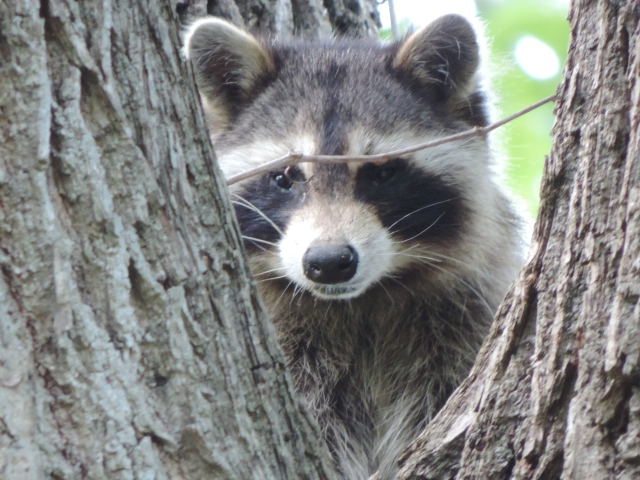 glad it didn’t get MY tree…

Welcome to Rivertop Rambles. This is my blog about the headwaters country-far afield or close to home. I've been a fly-fisher, birder, and naturalist for most of my adult life. I've also written poetry and natural history books for thirty years. In Rambles I will mostly reflect on the backcountry of my Allegheny foothills in the northern tier of Pennsylvania and the southern tier of New York State. Sometimes I'll write about the wilderness in distant states, or of the wild places in the human soul. Other times I'll just reflect on the domestic life outdoors. In any case, I hope you enjoy. Let's ramble!
View all posts by rivertoprambles →
This entry was posted in Uncategorized and tagged adventure, beavers, birthdays, energy, humor, kitchen, nature, Niagara Falls, photography, poetry, science, something funny, storms, tornado, twister. Bookmark the permalink.

28 Responses to Aftermath (There’s Something Funny Going On)