Posted on July 6, 2016 by rivertoprambles

In June, Leighanne and I took a trip to the Albany area where I was to present an evening of poetry for the folks at the Pine Hollow Arboretum in Slingerlands, New York. The event wasn’t as boring as you might think. 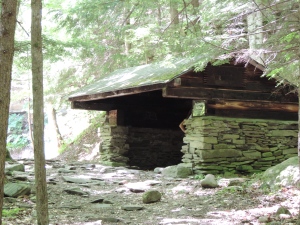 En route, we stopped at the Christman Nature Sanctuary near Delanson for another walk along the Bozenkill on property that once belonged to the upstate farmer poet W. W. Christman (1865-1937). The creek with its lovely waterfall was flowing minimally, but a highlight for me was a singing prairie warbler that I had an excellent view of near the parking lot.

Before my reading in residential Slingerlands, we enjoyed good food and craft beer at a restaurant near the arboretum, so I was pumped up for my presentation to the trees and flowering shrubs and to the brave fans of literature who came out to hear my poetry and prose on a Friday night.

God bless these souls, especially our friends Tim and Laurie who drove out from Nassau for us (Laurie had to work but left her duties to provide an extra key for her husband who had locked his in a truck at the arboretum when Triple A was just too busy to help).

We were planning to stay the night at their house, so we drove Tim in our vehicle to a rendezvous site in downtown Albany where he and Laurie could exchange a spare key. Leighanne and Tim and I returned to the stranded truck and then separated for the drive toward Nassau where we stopped for drinks at a local bar.

The place was crowded with a blend of young and working class patrons. Tim said, “If anyone asks, tell ’em you just came from an NRA meeting, not a poetry reading!”

even the dogwood listened…

The headwaters of Kinderhook Creek, the stream where I cut my teeth as a fly-fisher at an early age, a stream that I seldom have the chance to visit anymore, are situated near Nassau, and Tim advised me of some new water I could try near Route 66, a place called Kinderhook Creek Nature Preserve. I’m glad I had an opportunity to make a first visit there.

we missed it the first time thru…

New York’s Route 66 was vaguely familiar to me, and I got to know it even better. I began making a connection to the popular rhythm and blues number, “(Get Your Kicks) On Route 66,” written in 1946 by Bobby Troup and first recorded by Nat King Cole and then covered by a thousand other artists through the years.

I improvised on the lyrics, with deep apology to original creators…

If you ever plan to motor East/ Travel a road that’s not the least/ Get your kicks on New York 66.// Forget about the suburbs/ This is rural all the way–/ Winding south from Troy, New York/ Almost 50 miles they say/ To Hudson by the docks…

For there it was, my highway to Kinderhook Creek near Malden Bridge where I first raised a fly rod to a trout stream as a kid. And there it was in present time, a roadway with a turn-off onto gravel and remoteness in the Berkshire Hills, a trout water flowing like a small Adirondack river upstream from my boyhood haunts, slow pools and rapids coursing through a newly formed Kinderhook Creek Nature Preserve. 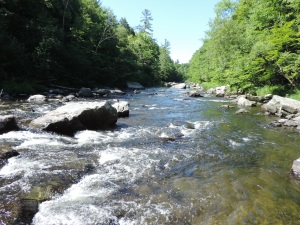 This sanctuary is a 121 acre “working forest” with a half mile shoreline on the creek. Its four miles of public trails criss-cross each other and can be confusing to the newcomer, but a good map provided at the parking lot is helpful, even necessary.

Serving Chatham town and Nassau, too/ Along the banks of Kinderhook–/ The creek where I fished as a kid/ Saw him catch a first trout long ago/ Getting his kicks on New York 66.// That’s right, he got it there by Malden Bridge/ And the pool with its graffiti/ Not far from the Berkshire Hills/ And other hamlets pretty/ When you swing beneath I-90/ Get your kicks on 66. 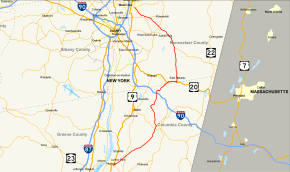 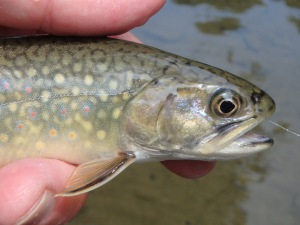 “can’t you get yr kicks somewhere else?”

In the woods we missed the little sign saying “To Kinderhook Creek” so we took the Says Trail up a ridge and then back down along a steep slope that had ropes beside it for the physically infirm. We could’ve taken the easier trail if we had been awake, but this way we got to see the sanctuary’s back country en route to fishing in the creek.

I say get hip to this kindly tip/ Take that Capital District trip–/ Get shook by Shaker history/ Drink some craft beer at the Brewery/ And feel the mystery of New York 66.

Holy crap I just turned 66!/ Don’t know how I got here, really/ Didn’t mean to get so old–/ I’m feeling pretty young now/ Heading up to Garfield Road/ Into Tsatsawassa Woods…

I fished the pocket water for an hour. Not much going on, but I caught a nice brown on a Prince nymph as Leighanne, having tumbled awkwardly down a bank and into the mud, washed up in the warming waters of the creek.

Thinking, if you ever plan to motor East/ Check out the Kinderhook Creek Preserve/ Rensselaer Land Trust doing its best/ To keep a trout stream wild and free/ To keep it clean and cold/ Getting its licks on New York 66. 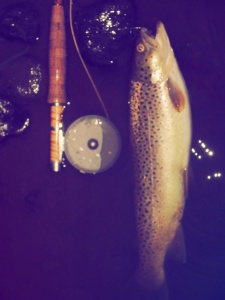 In addition to the half mile public fishing rights along the creek, this nature preserve features trails for hiking, cross-country skiing and exploring, riverside sand and gravel bars, steep cliffs, a hemlock-hardwood swamp, and six forest types with good habitat for wildlife and rare plants.

I’ll make a shameless plug here for my book River’s Edge which includes a chapter called “Kinderhook Kid,” a detailed account of my connection to this trout stream. As for the preserve on the upper Kinderhook, I’d say it’s a good place for a nature boy or girl, no matter the age, to get some healthy kicks and bonding with the earth.

Welcome to Rivertop Rambles. This is my blog about the headwaters country-far afield or close to home. I've been a fly-fisher, birder, and naturalist for most of my adult life. I've also written poetry and natural history books for thirty years. In Rambles I will mostly reflect on the backcountry of my Allegheny foothills in the northern tier of Pennsylvania and the southern tier of New York State. Sometimes I'll write about the wilderness in distant states, or of the wild places in the human soul. Other times I'll just reflect on the domestic life outdoors. In any case, I hope you enjoy. Let's ramble!
View all posts by rivertoprambles →
This entry was posted in Uncategorized and tagged "River's Edge", 66, Christman Nature Sanctuary, Earth, fly-fishing, Get Your Kicks on 66, hiking, Kinderhook Creek, music, nature, Pine Hollow Arboretum, poetry, travel. Bookmark the permalink.