Posted on April 8, 2016 by rivertoprambles

A beautiful day with sun and bluebird song… just before the weather crashed and brought back snow and wintry temperatures.

April Fool’s Day, not a time of cosmic harmony.

I fished the headwaters of Naples Creek, above the circus of fishing tourists wielding their plastic nets, red wigglers, egg sacs, spinners, and (yeah) artificial flies.

I caught them like this, small residents, instead of the big 7-pound spawners.

Okay, I participated, loosely, in a religious event. It was gonna be different this year. The winter had been warm; the spawing rainbows had largely dropped back to the lake already; the crowd would be relatively thin…

I was heading toward this falls on “Crapper Creek,” when the inevitable occurred…

The crowd was thinner than it usually is, but still kind of fat. I headed up Tannery Creek, Reservoir Creek, Eelpot Creek (upper Naples), Grimes Creek, and “Crapper Creek,” where I took took a tumbing slide down a high bank and, oh so fortunately, landed unhurt.

Instead of seeing a band of stars flashing across my eyes, I saw leaping trout on a bridge (even though no one else seemed to be catching large rainbows this day). I saw the muskrat that swam from an undercut, intercepting my drifting fly then swimming into another hole upstream before the hook popped free.

I saw the four or five-pound trout that struck from an undercut bank in a different stream but missed the passing fly. Unfortunately, that was the only large fish (live one) that I saw all day.

I saw loons on a local marsh and farm pond. Actually my wife saw them first, a few days after the “Opener,” but maybe I was seeing them in preview as I lay there on the mud of Crapper Creek. Who knows. It’s nice to see these migrators whenever or wherever they appear. 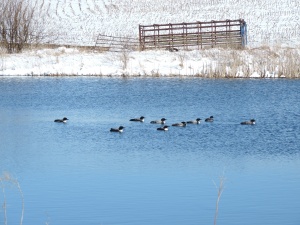 I saw, again, the first bloodroot flower of the season. It wasn’t a great specimen. It was partly closed and a bit disheveled so I didn’t bother taking a photo. Instead, I thought of the flower as recorded in Earthstars, Chanterelles, Destroying Angels, my new book of poetry. I rose from the bedrock of the creek and climbed back toward the car.

Mishaps? Perhaps. I’ve had better times, and I’ve had worse. Living the life that opens day by day.

Welcome to Rivertop Rambles. This is my blog about the headwaters country-far afield or close to home. I've been a fly-fisher, birder, and naturalist for most of my adult life. I've also written poetry and natural history books for thirty years. In Rambles I will mostly reflect on the backcountry of my Allegheny foothills in the northern tier of Pennsylvania and the southern tier of New York State. Sometimes I'll write about the wilderness in distant states, or of the wild places in the human soul. Other times I'll just reflect on the domestic life outdoors. In any case, I hope you enjoy. Let's ramble!
View all posts by rivertoprambles →
This entry was posted in Uncategorized and tagged bloodroot, common loons, Crapper Creek, earthstars, fishing, Naples Creek, nature, opening day, pelican, poetry, rainbow trout. Bookmark the permalink.

16 Responses to The Opener