Posted on February 5, 2016 by rivertoprambles

On Sunday, with weather approaching spring-like conditions, I ventured to the Pine Creek Gorge. Unfortunately the Rail Trail through the gorge was closed for repairs. In order to continue with my interest in hiking, I traveled on to Colton Point and took a walk to the West Rim Trail and the Barbour Rock Vista. From there I could look straight down a thousand feet to Pine Creek and Owassee Rapids. 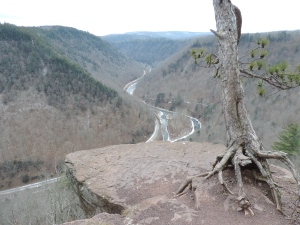 I was on the western rim of the Pine Creek Natural Area, a National Natural Landmark, in northern Pennsylvania, a wild place I adopted as the heart of the “fly fishing realm” reflected in my book called River’s Edge.

The West Rim Trail was quiet at this warming end of January. Other than a few cars that had passed me on the icy road leading to Colton Point State Park, and a couple of hikers heading back to the parking lot as I made my way to the vista, there was little sign of any connection to a wayward planet. 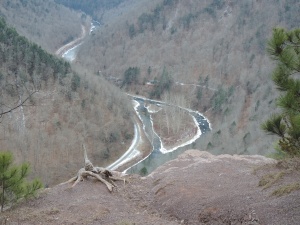 I took a deep breath and edged out toward the rim. I wished for the sun to appear and to cast good light for the camera, but it wouldn’t come out till later– as I was driving to the western rim of this watershed for a round of brook trout fishing.

I listened to the rapids foaming through Barbour’s Bend, a place commonly known as Owassee Rapids, a rocky sluice capable of tossing the heart and soul of rafters and canoers who enter it while riding through the 20-mile gorge in spring.

I thought of Samuel Barbour who died there in the 1890s while trying to break up a log jam, and for whom these West Rim rocks were named. At Barbour’s death, the Pine Creek wilderness and its white pine forests were quickly heading toward destruction, all their groves being clear-cut and their slashings turned into flame and smoke.

Later, when the timber companies had nothing left to ravage, they sold their lands to the state of Pennsylvania which, in its early wisdom, gave this beautiful region an opportunity to re-wild.

Getting to the heart of the matter, I went fly fishing for an hour or two. I should’ve known that the seasonal roadway to the stream that I selected would not be plowed or sanded. The pagan angels should have whispered in my ear, “Hey buddy, that road’s gonna be covered with ice and water. Think about it.” 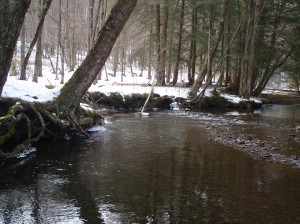 With no place to turn around, I kept moving toward my usual parking spot, hoping like mad that it was open and not too steep for reversing the vehicle when it was time to leave.

Okay, I had to fish. I could worry about my exit when the time for worryin’ arrived.

The stream was low and clear, a thing of beauty that required a careful step, a power that, in turn, would throw its net of relaxation.

I used a longer rod than usual, an 8’4″ three-weight that would come in handy while nymphing and encountering the possible ice shelf. Small black stoneflies crawled out on the rocks and snow to look at life from their own western rim.

My beadhead imitation did the trick. I was on the edge between sun and shadow, at the brink of February, and as far as I could tell, the whole world was fishing or dreaming about something nearly as pleasant. 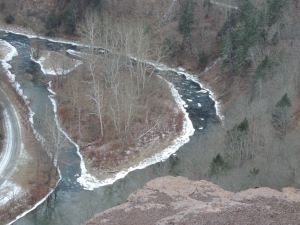 The road, which could’ve been an Owassee Rapids of seasonal thoroughfares, wasn’t bad at all. A few bumps and slides, a share of suspense, but nothing to upend or quickly erase a winter afternoon.

Welcome to Rivertop Rambles. This is my blog about the headwaters country-far afield or close to home. I've been a fly-fisher, birder, and naturalist for most of my adult life. I've also written poetry and natural history books for thirty years. In Rambles I will mostly reflect on the backcountry of my Allegheny foothills in the northern tier of Pennsylvania and the southern tier of New York State. Sometimes I'll write about the wilderness in distant states, or of the wild places in the human soul. Other times I'll just reflect on the domestic life outdoors. In any case, I hope you enjoy. Let's ramble!
View all posts by rivertoprambles →
This entry was posted in Uncategorized and tagged brook trout, fishing, hiking, nature, Owassee Rapids, photography, Pine Creek Gorge, small streams, stoneflies, timber, West Rim, wild. Bookmark the permalink.

14 Responses to The Western Rim