Posted on January 20, 2016 by rivertoprambles

I was following the tracks of a large coyote along a Susquehannock State Forest trail but thinking that, unfortunately, there was little other sign of bird or mammal life. Then, about a mile up the snowy trail, I caught sight of a motion on the wooded slope to my left.

A fisher (weasel family) was approaching the trail and the stream where I was hiking. The “fisher cat,” about the size of a short-legged fox, stopped on the snow about 75 feet away. It was the first of its kind that I’ve seen while hiking or fishing in the wild. 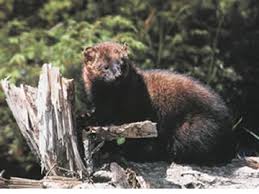 The creature, with its diagnostic head (pointed) and long flowing tail, had stopped to look me over, but only for a moment or two. Its fur looked striking, a blend of dark chocolate and ginger hues. I slowly reached for my camera. [Fisher photo by NatureMapping Foundation]

Unfortunately I was wearing gloves and the camera was in a bag behind me. You know how it goes. I’m a hiker, not a wildlife photographer. The fisher retreated quickly up the slope, dodging behind big rocks and logs and trees. I followed it for a short distance, hoping to get a decent photo of its tracks but, alas, the snow was thin and crusty and the imprints poor.

the fisher tracks are in there, trust me

Modern man suffers from a poverty of spirit, said Dr. Martin Luther King. We can do just about anything imaginable with our fine array of technological advances, but we still haven’t learned to “walk the Earth as brothers and sisters.”

Well, some of us are trying to do that, and occasionally it seems that, despite all the mayhem in the world, some advances have been made since the 1960s. I might add that King’s statement about walking the Earth together also applies to our relationship with animals and with outside nature in general.

Each year on or near the Martin Luther King holiday I take a walk on the wild side. I try to connect with the ideas of the civil rights leader by applying them not only to our own kind, but also to honor what gives life and sustenance to all. That might seem a little strange to some, but it makes sense to a well-aged country boy like me. I like to think that the common theme is freedom.

An encounter with a beautiful creature, or with our discovery of something new and different in the wild, helps to boost our personal connections with the Earth. For me, a sudden meeting with a fisher in the mountains makes a good connection.

There’s a lot of folks who just seem lost in life and in need of a “good connection.” No surprise there. I had to laugh at one of the “Top Searches” that recently came through at this blog site, and had to wonder how that searcher landed here. I quote: “Snow railroad-123rf-lady-clipdealer-kootation-creativecrash-girl-shemale-dreamstime-depositphotos-tumblr-classicalnerd-public nuditymen.”

I suppose it all makes sense in some alternate universe but… “public nuditymen”? Not a chance, buddy, not on Rivertop Rambles! However, I could use a good photo of a fisher (weasel family) in all its naked glory.

Fishers are native to the forests of New York and Pennsylvania and were found here until extensive lumbering in the nineteenth and twentieth centuries, plus trapping for their valuable fur, decimated the populations in all but the remotest locations. More recently, a resurging public interest in habitat restoration and all things wild has allowed the fisher to make a modest return to its rightful place in the food chain.

Speaking of food, the fisher is not typically an eater of fish but can run down a high-tailing red squirrel or make a meal of porcupine without “suffering the slings and arrows” of outrageous quilldom.

from a brighter day

The fisher loves the deep forest where the rivers begin. It loves the country where the brook trout thrives. It’s said to be partial to deep ravines where the small streams meet. Prior to my MLK hike, the only fishers I had seen were noticed from a moving car. This one made the right connection for me. Now, if only I could get one to pause for the camera long enough to say …lady-clipdealer-kootation….

a good spring in fisher town

Welcome to Rivertop Rambles. This is my blog about the headwaters country-far afield or close to home. I've been a fly-fisher, birder, and naturalist for most of my adult life. I've also written poetry and natural history books for thirty years. In Rambles I will mostly reflect on the backcountry of my Allegheny foothills in the northern tier of Pennsylvania and the southern tier of New York State. Sometimes I'll write about the wilderness in distant states, or of the wild places in the human soul. Other times I'll just reflect on the domestic life outdoors. In any case, I hope you enjoy. Let's ramble!
View all posts by rivertoprambles →
This entry was posted in Uncategorized and tagged animals, civil rights, Earth, fisher, fisher tracks in snow, freedom, hiking, Martin Luther King, nature, personal connections, photography, Top Searches, wild, wildlife. Bookmark the permalink.

30 Responses to The Fisher Connection