Posted on November 11, 2015 by rivertoprambles

I was heading to one of my favorite casting locations for big brown trout and landlocked salmon, wondering if the autumn run had kicked in following a decent rainfall. Recalling my tumble in the mountains last week, I was ready to hit the upstate tributary with my

wading staff, only to find that it wouldn’t be needed– the creek was lower than expected.

Getting to my destination by 9:30 a.m., I could tell that the fish were in. I counted more than a dozen anglers on the Finger Lake tributary, but it was easy to find a good location that was both productive and unpressured. It was pleasant to fish inside the limits of an upstate city and still enjoy some casting in the company of birds such as robins, herons, cardinals, Carolina wrens, and cedar waxwings.

I thought about my history with fly fishing for landlocked salmon, a subject that’s reflected in my book, Beautiful Like a Mayfly (p. 152), and my present motivation for connecting with this powerful fresh water species…

“I was ready for a change of pace, and was hoping that to fish for landlocked salmon would allow me to keep in balance with the planet. As usual, there was a major crisis developing in the world, and my father, aged 87 and in the last year of his life, aptly grumbled that everything’s going to hell in a hand basket. The financial realms had struck an iceberg in the sea of money and were tipping like a new Titanic…” 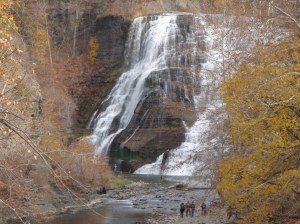 I didn’t have a lot at stake in that particular crisis that began about seven years ago, but like everyone else I knew, I got a sense that the world was on a hell-bound train. I looked for a new angling pursuit as a form of therapy.

Landlocked salmon came to the rescue then. Finally. And on this visit to the salmon and brown trout water, I could still sense those train kept a-rollin’ vibrations from the prospects of doom, from crises such as man-made global warming, but could feel some hope through a smattering of other news… 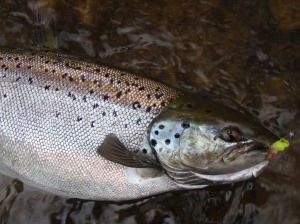 For example, President Obama recently rejected the Keystone XL project that would have further damaged our planet and added to the woes of climate change. Thanks to civil protest of the corporate gas and oil interests currently dominating the economic status quo, we can breathe a little easier, for now, and hope that the long-delayed movement for sustainable energy sources can build a little steam. On a related note, a handful of U.S. senators have introduced a bill that would put a moratorium on gas and oil extraction from our public lands. It all might be too little too late, but thanks, I say, and let ‘er rip…. 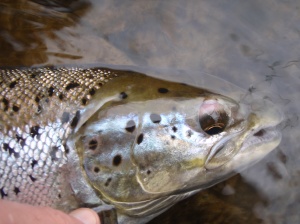 Like a powerful run of a landlocked salmon that has taken the downstream swing of a streamer across its “window of opportunity” and made me feel, again, the rush of energy that often yields an awesome display of furious two-foot jumps and body flips. These fish, the landlocked version of the premier ocean-running Atlantic salmon, are a joy to fish for and to bend a trusty six-weight rod.

Although the brown trout seemed few and far between, I did hook and lose a two-foot battler in the riffles, and spoke with an angler who had recently landed a nice 26-inch trout. On this outing, it was salmon all the way. Since landlockeds will seldom chase a blindly casted fly, you pretty much need to stalk them like a heron and then present an accurate cast that drifts in front of their noses without a body strike. It’s no fun to foul hook a beautiful fish and then have it freaked out and sulking for the rest of the day.

Today I probably could have counted my fair-hooked salmon on a wrinkled hand, but I can’t complain. The fish returned in good form to the spawning stream, and I thanked them for a therapeutic session.

P.S. I added a few non-fishing photos from my hilltop taken the same weekend. I may be landlocked but I can dream… Yeah, come join me for a throwback swim in pleasant summertime or, if that’s a little too bucolic for your tastes, climb aboard a rocknroll classic and that hellbound train that I referred to earlier. The “deadstop” at the end is guaranteed to set you free…

Welcome to Rivertop Rambles. This is my blog about the headwaters country-far afield or close to home. I've been a fly-fisher, birder, and naturalist for most of my adult life. I've also written poetry and natural history books for thirty years. In Rambles I will mostly reflect on the backcountry of my Allegheny foothills in the northern tier of Pennsylvania and the southern tier of New York State. Sometimes I'll write about the wilderness in distant states, or of the wild places in the human soul. Other times I'll just reflect on the domestic life outdoors. In any case, I hope you enjoy. Let's ramble!
View all posts by rivertoprambles →
This entry was posted in Uncategorized and tagged birds, brown trout, economics, energy, Finger Lakes, fishing, Hellbound Train deadstop, hope, Ithaca, landlocked salmon, music, nature, photography, politics, therapy, train. Bookmark the permalink.