I’ve never been good at remembering people’s names, and it doesn’t get any easier with age and experience. Allow me to explain. 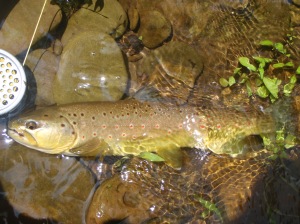 The weather forecast for Slate Run, Pennsylvania wasn’t looking good: a high of 87 degrees, with drenching humidity and a solid chance of storms, but I was going there to fly-fish, come Hell with raindrops or big water.

The Pine Creek watershed, including all of Slate and Cedar runs, had been hit with heavy rains all week, and the streams looked fine for kayaking but not so much for casting with a fly.

It had been a couple of years since I fished on Slate Run proper. I was interested in seeing if the ebb had bottomed out, and if the wild trout populations had recovered. Several years ago, a Slate Run survey by the Fish & Boat Commission suggested that recovery was imminent, based on the number of brown trout young-of-year. 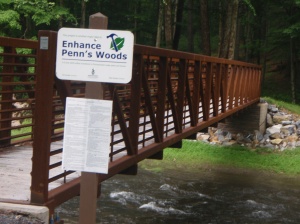 Catching an 8-inch brook trout on my third or fourth cast of the morning, and then a 9-inch brown trout shortly afterward, I was starting to feel that maybe Slate was finally coming around.

It wouldn’t be an easy task. The stream was flowing very high and mostly clear. Wading was close to impossible, especially without an implement for support.

Retrieving my beadhead Prince nymph from the pocket water, I felt a big fish slam the fly and turn over once. It vanished in the whitewater with a fly in its lip. Things were looking better here on Slate, for anglers if not for trout.

I saw a man about my age, or older, walking the streambank under the pines. I stepped out to say hello. I didn’t recognize the fellow, whose name was Ed, but he knew me from the Slate Run Sportsmen meetings, and we quickly got to talking on the ways of people and trout.

He’s a fly-fisher, but had broken his back a while ago, and now has to use a cane or a walker on his Slate Run rambles. He enjoys painting, and often works from a photograph that he takes while checking on the water.

Just before I got back to my fishing, I told Ed it was good to speak with him along the creek, and added, “What is your last name again?”

Ed’s heritage is German through and through, and even though I’ve had plenty of experience with complicated surnames from the old country, I could not remember Ed’s last name. I still can’t remember it, damnit.

With due apologies to my new acquaintance, I know it’s not as simple a name as “Schmidt.”

Giving me his full name for a second time, Ed recalled a joke that he had to tell. He said, “You’re a senior citizen, like me, right? Well, listen to this…

“An old couple came home from a big dinner date at a restaurant. The old man and woman got out of their car, and a young neighbor who’d known what they were doing saw the couple and wondered how the evening went. 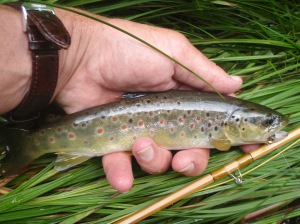 “The wife had gone into her house, but the neighbor stopped the old guy just before he got away.

How did it go? asked the young neighbor.

“The old guy said it was fine, not bad at all. Then the young man asked him where the restaurant was.

Oh… down the road a ways. Not far.

So what did you have? What was the food like?

Oh, I don’t know, remarked the old fella, with some apprehension and concern. It was pretty good, I guess.

What’s the name of the restaurant that you and the Mrs. went to?

“Oh shit, thought the old man. Now he’s got me…

Uh, the name has something to do with flowers, he said… A spring flower… What’s it called… with lots of smell and color, but with thorns.

Rose? asked the neighbor. Is it Rose?

Oh. Yeah, that’s it! exclaimed the elder. He then put his hand to his mouth and yelled to the house…

HEY ROSE! What was the name of that restaurant we went to?”

Ed and I departed, laughing loudly.

I went up to the next big pool on Slate Run and quickly got a nice wild brown trout on the line. This colorful specimen, just before release, measured 16 inches along my new fly rod.

Maybe I should run into Ed every time I’m on the water!

Although the sun’s heat had pervaded the depths of the gorge, I felt like making a joyful noise. It might be a little premature to say, but I’ll say it before I forget— the Slate Run fishery seems healthier and more abundant than it was a while ago.

Now, speaking of joy, let’s have a listen to Harry Nilsson’s “Joy,” and… chuckle.

Welcome to Rivertop Rambles. This is my blog about the headwaters country-far afield or close to home. I've been a fly-fisher, birder, and naturalist for most of my adult life. I've also written poetry and natural history books for thirty years. In Rambles I will mostly reflect on the backcountry of my Allegheny foothills in the northern tier of Pennsylvania and the southern tier of New York State. Sometimes I'll write about the wilderness in distant states, or of the wild places in the human soul. Other times I'll just reflect on the domestic life outdoors. In any case, I hope you enjoy. Let's ramble!
View all posts by rivertoprambles →
This entry was posted in Uncategorized and tagged aging, fly-fishing, Harry Nilsson, humor, jokes, Joy, names, nature, old guys, Rose, senior citizens, Slate Run, wild trout. Bookmark the permalink.

22 Responses to The Slate Run Trout and Senior Citizen Update