Posted on June 8, 2015 by rivertoprambles

May 30: In the long meadow pool of the Allegheny, rainbow trout were rising to

the surface but it took a while to figure out that it wasn’t mayflies or caddis they were feeding on, but midges. Tiny black midges. Of all the famous and diverse insects that potentially hatch from these rivers at the end of May, trout were locked on something my eyes could barely see… I caught some high-jumpers, finally, and missed a possible 18-incher, on a dry fly about the size of a consonant, a letter, ending this sentence on the post.

May 31: The morning trout were rising on the Kettle, and again I struggled to decipher the hatch that raised them. Midges again, damnit. But thankfully, the overcast conditions soon delivered the larger Blue-winged Olives. I quickly replaced a #22 Midge with a “normal” imitation and had some fun. I got plenty of refusals, but I caught a few browns and even a wild brookie at a beautiful bend pool.

I was stormed out of my hopes to climb a feeder stream to Kettle. Trout were taking the olive mayfly on the faster water, but I never saw much of the anticipated Sulphurs or Green Drakes. To this point in time, the rivertops had seen a lot of caddis activity but the mayflies had been spotty.

June 1: Chill and showery, great for fishing. Blue-winged Olives (BWO) and Sulphur mayflies hatched in the mist of the upper Genesee. Rising trout were interested in a relatively large BWO, a barbless #14 hook.

Brooks and browns and rainbow trout slashed at the surface of a big pool on the West Branch. Powerful trout unraveled at least two flies before the Olives settled down and the Drakes finally appeared.

The fishing was fast and furious for a while but, oddly, by the time the Green Drake 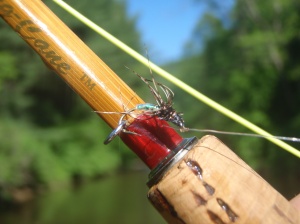 surfaced and sailed off slowly in the rain, the feed was pretty much over. Either the trout had glutted themselves, or the tight line commotion had sent a warning about some madman in the water!

June 6: The sun shone brightly on upper Kettle. Insects, for the most part, were slumbering. I saw a couple of Drakes, and that was it, but the trout rose for an imitation nonetheless. It was fun to hook up with the hatchery browns and rainbows, and a lot of small wild brooks. 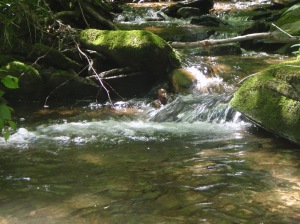 I left the main stem and fished two tributaries, one of which took me into wild country– a small feeder stream with brookies and no sign of civilization whatsoever. It was what the Doctor of Beyond prescribed for mental health.

Playin’ the hatch is what serious fly-flingers do from time to time. Here in rivertop country that’s especially true at this time of year when any number of caddis, stonefly or mayfly hatches can occur on a daily basis. Sometimes trout become very selective in their feeding habits, so on these occasions the angler would do well to match the given hatch in color, size and profile.

June 7: I was back on one of my favorite trout streams. What a difference an early morning makes. The bugs (non-biters) were everywhere– emergers, duns, and spinners– and the trout were feeding mainly on the Blue-winged Olive that the Kettle is renowned for on June mornings.

The weather couldn’t have been more comfortable or bright. Hooked rainbows leapt above the water. At the Ledge Pool, well upstream from the special regs area where most of the fly-fishers congregated, healthy browns fed quietly at the surface.

There was sweetness in the air, perhaps from the resins of hemlock or pine, or from the

blooms of various wildflowers, reminding me of Rocky Mountain summer streams. A male scarlet tanager sang its hoarse robin-like song from high in a creekside maple.

I quit after landing trout 18. I’d seen a mix of larger-than-average stockers and wild brookies. It was the kind of day I dreamed about last February. It was match-the-hatch, catch-and-release fishing that the non-angler or the bait-fisher might construe as rarified or even elitist, but wait, there’s more….

I sympathized with several worm-casters I spoke with. They had seen their hour in the sun. For the most part, trout ignored their offerings now that flies had become top items for the daytime feed. These were guys who claimed to release a big portion of their trout but admitted that a swallowed hook killed fish. I reminded them that fly-fishing would extend their season if they liked it, but I came off sounding lame.

I don’t like to be so involved with trout behavior that I seem as fussy as selective browns. I don’t want to miss out on the other stuff. You know, the mourning warbler chatting in the understory; the monarch sipping at water’s edge; the black bear keeping an eye on the angler’s trout….

To keep myself balanced today, I sang to myself– a gutsy rock ‘n’ roll lyric or some improvised jazz. To function as my own audience is schizophrenic, I suppose, but at least I wasn’t lonely.

I sang to “Crawfish,” by the great Roger Chapman, former Family guy, with the Streetwalkers (1975): Ah well I went to the Bayou late last night/ There was an old moon and the stars were bright/ I put a big long hook on a big long pole/ And I pulled Mr. Crawfish outta his hole…

Matchin’ that hatch with crawdaddy soul.

Welcome to Rivertop Rambles. This is my blog about the headwaters country-far afield or close to home. I've been a fly-fisher, birder, and naturalist for most of my adult life. I've also written poetry and natural history books for thirty years. In Rambles I will mostly reflect on the backcountry of my Allegheny foothills in the northern tier of Pennsylvania and the southern tier of New York State. Sometimes I'll write about the wilderness in distant states, or of the wild places in the human soul. Other times I'll just reflect on the domestic life outdoors. In any case, I hope you enjoy. Let's ramble!
View all posts by rivertoprambles →
This entry was posted in Uncategorized and tagged bait-fishing, balance, Blue-winged Olive, caddis, crawfish, dry fly fishing, Green Drake, Kettle Creek, matching the hatch, mayfly, midge, nature, Roger Chapman, Streetwalkers, wild. Bookmark the permalink.

18 Responses to Matchin’ That Hatch