Posted on April 2, 2015 by rivertoprambles

Day 1: Driving west from Warrenton, Virginia into the Blue Ridge Mountains and Shenandoah National Park provided a pleasant reentry into the realms of hiking and

Wife, Leighanne, and daughter, Alyssa, gave company and comic relief to my sunny day, blue sky adventure. Beautiful weather, 60s, perfect for a Skyline Drive walk downhill into the headwaters of the Rose River, a feeder stream to the Robinson that feeds the Rapidan, Rappahannock, and James River system of the Chesapeake drainage.

With an easy 1.3 mile descent to the Rose, I started casting for native brook trout with my conveniently designed 4-piece rod. The upper Rose was flowing clear and cold (45 degrees F., a bit chilly for dry fly fishing but good with a bead-head nymph). Although groups of hikers and even a bait-casting fisherman were ahead of me at some of the pools, I did okay, considering I angled for only an hour or so.

The brookies were colorful and lively. My wintry legs and and ankles felt a bit rubbery

while stepping among the wet rocks and boulders, but I was getting there. And Leighanne, recovering from back surgery, did the 2.6 mile hike with relative ease.

Day 2: March made an exit like a lamb. This seemed to be the day I’d been waiting for all winter. The drive west out of Charlottesville into the Blue Ridge and Shenandoah National Park was filled with the anticipation of high spring.

The old road/hiking trail along the North Fork Moormans was starred with wildflowers, my first of the year– coltsfoot, bloodroot, hepatica and spring beauty. Songbirds, including the Eastern phoebe and Louisiana waterthrush, rang their notes from the cliffs of this cold mountain stream.

With the water temperature in the high 40s, it seemed reasonable to start casting with a nymph again. There were midges over the stream, but the stoneflies and Blue Quills had yet to make an appearance. Whereas the Hare’s Ear nymph was all I really needed for the day, I was glad to mix in some dry fly fishing after the first trout rose to the surface. 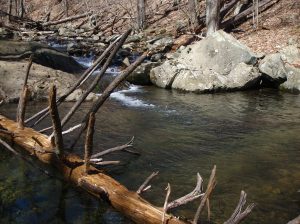 After suffering devastation from flooding along with landslides in 1996, the Moormans seems to be making a remarkable recovery, if the size of its wild brook trout are any indication. Two of the trout I caught today, fooled by an artificial nymph, were notable for an eastern mountain stream. The smaller specimen was 10 inches, and the heftiest native measured almost a foot in length. 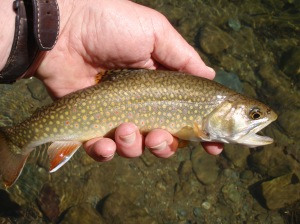 Someone asks me, “In fishing, does size matter?” Well, I guess that here it does.

The Moormans is a beautiful stream in the wild eastern flanks of the park. There were times, well into the mountains, when I wandered farther from the trail than usual. I came to places that often included a deep, lovely pool, a place with real solitude. They were places where I’d be in quite a jam if I happened to break an ankle or something while dodging logs and boulders. But I’m glad I found those little trout locales.

Had I known of them, but failed to fish them for some reason, I might have had a tough

time living with myself for several days.

All in all, the six-mile hike, out and back, was filled with a series of pools and small cascades, of wildflowers and songbirds, and colorful trout.

Day 3: No joke, April dawned cooler than March, but clear and beautiful along the lower Rapidan River. From the dead-end of pastoral Route 662, I walked the river trail into Shenandoah National Park with Leighanne, Alyssa, and my brother-in-law Richard. Where the Staunton River poured its rocky mountain waters into the Rapidan, I parted company with the others (we had come here in two vehicles), fished the lower Staunton and caught the day’s first brook trout at the junction with the larger stream.

The Staunton’s flow was high enough to thwart all hikers without wading shoes. I crossed it and proceeded up the Rapidan, one of the finest wild trout streams in the eastern U.S., and soon felt the residues of human society dissolve in the clear, deep holes and wonderful, boulder-studded pools.

With water temperature in the high 40s again, with bright sunshine overhead, the fishing was slower than on the Moormans, at least for a while. With the drifting of a bead-head nymph, I caught an occasional brook trout, none of which would surpass the nine-inch mark today. 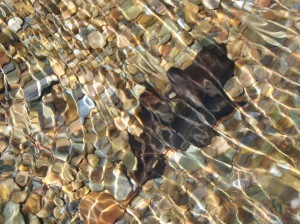 Around 4 p.m., I saw the first rise-form in the “Emerald Pool” and, shortly after, the Quill Gordon mayflies fluttered from the rippling surfaces.

At one remarkable location framed by ancient mountains, I caught and released five brookies on a ragged dry fly, size #14.

So, with three more days to hit the southern streams, this old April fool is tired but pleased to be your humble servant.

Welcome to Rivertop Rambles. This is my blog about the headwaters country-far afield or close to home. I've been a fly-fisher, birder, and naturalist for most of my adult life. I've also written poetry and natural history books for thirty years. In Rambles I will mostly reflect on the backcountry of my Allegheny foothills in the northern tier of Pennsylvania and the southern tier of New York State. Sometimes I'll write about the wilderness in distant states, or of the wild places in the human soul. Other times I'll just reflect on the domestic life outdoors. In any case, I hope you enjoy. Let's ramble!
View all posts by rivertoprambles →
This entry was posted in Uncategorized and tagged bloodroot, Blue Ridge, fly-fishing, hiking, nature, North Fork Moormans, Rapidan River, river notes, Rose River, Shenandoah Nat'l Park, Skyline Drive, Spring. Bookmark the permalink.