Good Morning, Steelhead (Wherever You Are)

At last, on the first full day of spring, a day that followed an unusually difficult winter in upstate New York, I was out there fishing and moving once again…I felt like a steelhead, perhaps, off on a “swim” from a frozen winter past to the start of a springtime near (appropriately enough) Springville, New York. 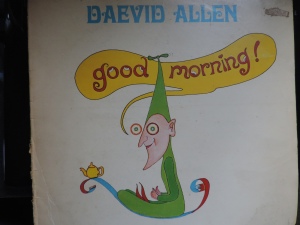 Fly-fishing has always seemed like more than any one event or experience for me. Somehow it has its own connections to my varied interests in the natural environment, ecology, philosophy, music, tradition…You might say that fishing has to do with trying to live a full life in the present moment. Keeping this in mind, I stepped into a feeder stream of Cattaraugus Creek in western New York where the season for steelhead is open and about to kick into high gear with the spring run of rainbow trout from Lake Erie. 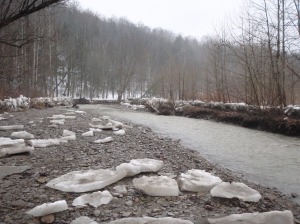 I was happy as a bluesman sitting on top of the world, but that state of mind came only after I had put some less than cheerful aspects of the season on the back-burner.

A good friend of mine, from West Almond, passed away in January. Sean Phelan was my age, a fine craftsman, conservationist, and birder who, like other leaders, had come to the defense of Allegany County when this area was threatened by the placement of a nuclear waste dump. Sean was also my collaborator on several projects that ranged from the successful placement of Keeney Swamp (Allegany County) on New York Audubon’s list of Important Bird Areas to the production of a first-time checklist called “The Birds of Allegany County, New York.”

More recently (this week), I learned that another musical mentor died on March 13th. 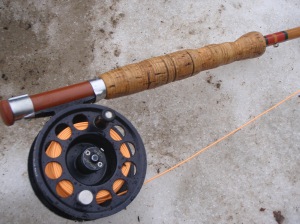 Daevid Allen was a co-founder of Soft Machine and then the various incarnations of the band Gong. From the wake of the renowned Beat Poets, Allen became one of the true originals of psychedelic and progressive music through work in his bands and solo career. Over the past 45 years, I’ve spent so many hours listening to the likes of Daevid Allen and Robert Wyatt that today I carried the fly rod like a sad song in the heart.

It had been a helluva winter, filled with more losses than I cared to experience, but such is life, especially with the onset of deep maturity. 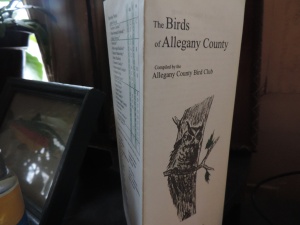 That said, it was time to fish!

The morning snow had turned into light rain, but the stream, its banks choked with blocks of stranded ice, was flowing well, its water heavily stained but fishable.

It felt great to be walking and casting again. There were no other anglers on the stream, as far as I could tell, and I made good progress, casting my streamers across the creek and down, through the various stretches that suggested holding water or had been productive in the past.

Usually when there are no other anglers in view at a place and time like this, it means

that the big fish probably aren’t around, and that looked to be the case today… So be it. I had heard that a few steelhead had been recently caught, but there were none in sight now.

The important thing was being out-of-doors, on the stream, with trout or no trout.

Although I covered only half of the two-mile distance I had hoped to fish if trout were evident, that was better than being stuck inside.

The rain intensified by noon and then turned into heavy snow. It was excellent steelhead fishing weather, actually, but when the wind increased and brought on the chills and a consequent numbing of hands, it was time to pack it in.

With winter losses set aside for now, it was time to celebrate a new season. At the Zoar Valley Inn, a fine area roadhouse, I enjoyed a Southern Tier IPA. I gave a toast to the Equinox and to inspirations past and present.

Daevid Allen had returned to his beloved Planet Gong. Friend Sean would be with me on my birding expeditions. Spring, at least in the scientific sense, was here.

Welcome to Rivertop Rambles. This is my blog about the headwaters country-far afield or close to home. I've been a fly-fisher, birder, and naturalist for most of my adult life. I've also written poetry and natural history books for thirty years. In Rambles I will mostly reflect on the backcountry of my Allegheny foothills in the northern tier of Pennsylvania and the southern tier of New York State. Sometimes I'll write about the wilderness in distant states, or of the wild places in the human soul. Other times I'll just reflect on the domestic life outdoors. In any case, I hope you enjoy. Let's ramble!
View all posts by rivertoprambles →
This entry was posted in Uncategorized and tagged birding, blues, Cattaraugus Creek, Daevid Allen, fly-fishing, friendship, Gong, spring equinox, steelhead, steelhead fishing, steelhead weather, winter in the blood. Bookmark the permalink.

12 Responses to Good Morning, Steelhead (Wherever You Are)