Pillow Cases (Kid You Not)

Posted on February 27, 2015 by rivertoprambles

[What’s goin’ on here, anyway? Have the “shack nasties” settled in so badly that Old

Man Winter just rambles around the place while looking for the Exit sign and forcing me to write stuff like… well, you’ll see. I mean, it’s almost steelhead fishing time but the snow and ice have still got a lock on most of the waters. Well, I’ve got one more tale to tell, a true one, with a strand of fiction blended in. Hopefully you’ll find it entertaining, something to sleep on as we more or less remain in hibernation, dreaming of the great outdoors…]

Long ago, before the age of personal computers, I worked in a private, residential institution that had once been a traditional Southern Plantation. The school, designed for learning disabled and emotionally disturbed students in the northern districts of Virginia, had a crisis.

The severity of the crisis in this school with 80-plus students was such that I’m able to describe it only by revealing the contents of a series of handwritten memos that had been passed along from one department to another. The subject of the memos was a load of…pillow cases… yeah, those sleeping items necessary for the health and well-being of everyone who lived or worked at the school. 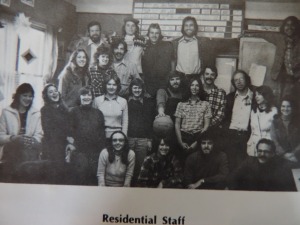 Chuck, the school’s director, had written to Scott, the residential supervisor: “Scott, Can you check the pillow case supply? Dorothy [a maid] indicates that none have been coming back from Laundry.”

Scott then wrote to Sue, a residential shift coordinator: “Sue, Do you know anything about our pillow cases?”

I was employed as residential coordinator of the work shift opposite of Sue’s, and I learned that she knew nothing whatsoever of the pillow cases. Sue then wrote to Larry, one of the counselors on her shift: 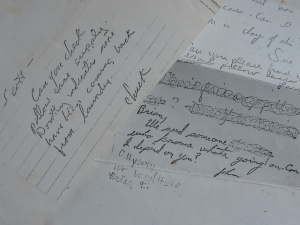 “Larry, We need more pillow cases. Can I put you in charge of this?”

Larry’s four-day/three-night shift was coming to a close when he received Sue’s message, so he wrote to his replacement who was due to arrive in an hour:

“Hey John– Can you please find us some pillow cases?”

In the hectic moments of his first day back at work, John the counselor scribbled a message on a photocopy of all the linked memos that had come down the chain from Dorothy and director Chuck. John addressed his message to Brian, the most reliable eight year-old student in the group that he supervised in residence:

“Brian, We need someone who knows what’s going on. Can I depend on you to help us?”

The next day, little Brian took a big pencil in his hand and added to the list of memos. He addressed his message to Allyson, coordinator of academics: “Allyson, We need HELP!”

To this point, dear Reader, I have not strayed one degree from what actually transpired at this high-browed institution, this residential school, where I met my wife-to-be and also made some long-lasting friendships. From this point on, however, please feel free to welcome an element of fiction…

I imagined the lost pillow cases cavorting ghost-like near the laundry center in the basement of the school. There were dozens of them, feeling empty and useless, wafting back and forth above the darkened machines, bereft of their previous form and function.

They were victims of bureaucratic bumbling. Although I never bothered to look for them myself, I pretended to be of help.

I gave several of these pillow cases a name– Slagbrain, Thistledown, and Ubu Roi– thinking to assist them by providing motivation to return to the realms of practicality. Maybe if I personalized these cases, they would lead their sheep-like brethren to the light.

Surely someone on the staff, removed briefly from pressing matters of the day, such as fretting over Progress and Efficiency and new Construction and the ultimate installation of Computers, would stumble on them for the betterment of all.

To help them pass the time, I gave the lost pillow cases a game to play. “Warp!” could be lots of fun. It didn’t have many rules to learn, so they could play with complete abandon. The goal of Warp! was to escape the Wheel of Time and enter the… Eternal Zone. The winner would be the case who realized, with the suddenness of a smack to the head, the Zen reality of having been a winner all along.

The prospect of winning was especially appealing to the Pillow Case named Slagbrain.

I reassured them all that, until recent days, pillow cases mattered. In fact, students had mattered, physical and psychological health had mattered, but now what seemed to matter most around the place was something alien, something of growing concern to the staff.

It was rumored, for example, that in coming months, the residential staff would no longer be allowed to drink beer in the after-hours while on duty in the lounge.

One night the lost pillow cases heard a crash from the rowdy staff lounge overhead. Plaster rained down from the ceiling of the Laundry Room. 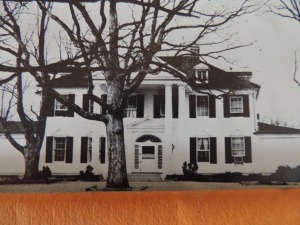 The kids were all asleep in their beds but the staff was getting loose. No one cared about the Pillow Cases– they who had no TV, radio, beer, or human head for company. Warp! was not enough to ease their tribulations.

I felt sorry for the Pillow Cases and, with beer in hand, made an exit from the lounge. I urged the cases to come out, to have some fun, to remove themselves from the constraints imposed by Homo sapiens.

I believed that some of the Pillow Cases heard me. Slagbrain, Thistledown and Ubu Roi must have heard. A sound of laughter rippled from the twilight zone, an area of the building other than the lighted windows of the lounge.

I stood beneath the great oaks of a wonderful plantation house, a school about to change with the times. I took a drink from my bottle, confident that those Pillow Cases would soon be found. They would again be reunited with a pillow. They’d be happy in their home.

Welcome to Rivertop Rambles. This is my blog about the headwaters country-far afield or close to home. I've been a fly-fisher, birder, and naturalist for most of my adult life. I've also written poetry and natural history books for thirty years. In Rambles I will mostly reflect on the backcountry of my Allegheny foothills in the northern tier of Pennsylvania and the southern tier of New York State. Sometimes I'll write about the wilderness in distant states, or of the wild places in the human soul. Other times I'll just reflect on the domestic life outdoors. In any case, I hope you enjoy. Let's ramble!
View all posts by rivertoprambles →
This entry was posted in Uncategorized and tagged bureaucracy, counselor, fiction, ghost, humor, memos, Michael Hurley, non-fiction, pillow case, plantation, school, shack nasties, Slagbrain, teacher, Twilight Zone, warp, Zen. Bookmark the permalink.

6 Responses to Pillow Cases (Kid You Not)