Posted on January 31, 2015 by rivertoprambles

On Saturday morning I greeted new arrivals to our staging area and proceeded to the stream. We were a small crew, but I was thankful to have several Boy Scouts and their leader among us. Hopefully we’d be able to finish the job by noon.

George H., a chapter member, and Joe E., a retired DEC biologist, were already pounding rebar at site #3. Thinking of the motivation behind the work for this project, I presumed that it was different for everyone involved. No doubt the bottom line for each of us was the sense that we were working for native trout and their environment rather than for any self-based reason or fishing opportunity. 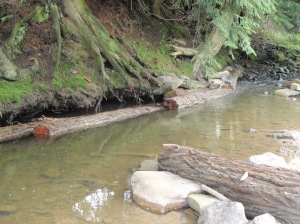 I doubted that anyone would ever want to fish at T-2, other than myself on an occasional basis in early spring. The stream was tiny, challenging, and too far from the road for most anglers (not to mention being on posted property). From my perspective, though, that was part of its appeal. This brook was probably as remote from “civilization” in New York as any waterway outside of the Catskills or Adirondacks.

I checked my own motivation. I was rereading a favorite American Western novel, A.B. Guthrie’s The Big Sky, first published in 1948. Believing that the impetus for westward movement in nineteenth-century America, as reflected in the novel, was still at work in our collective psyche, I recalled the story’s main character… 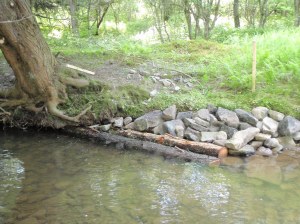 Boone Caudill and friends were forging into Rocky Mountain territory in the 1830s, and they met up with Caudill’s Uncle Zeb. The friends explained to Zeb that they, too, intended to be mountain men free to do as they pleased, despite their eastern upbringing. Uncle Zeb declared that they had… “better be borned ag’in.” How so?

Zeb, the western mountainer, told the travelers they were “Ten year too late… She’s gone, goddam it! Gone!” And what was gone?… The country.

“The whole shitaree. Gone, by God, and naught to care savin’ some of us who seen ‘er new.”

If the beautiful land and water with its bison and beaver were already slipping away in the 1830s, Boone and friends weren’t buying it. Yes, forts had already been built along the Missouri River and greenhorns were arriving quickly, slamming up against the Indians, but the friends of The Big Sky had a vision, like the earlier vision held by Uncle Zeb. As Zeb expressed it, “She was purty onc’t. Purty and new, and not a man track, savin’ Injuns’, on the whole scoop of her.”

Boone and friends demurred, responding to Zeb by saying, “She ain’t sp’iled… It depends on who’s lookin’.” So the company moved westward, despite the tragedy and hardship certain to follow.

Guthrie’s incredible portrait of the western movement in American history had an application here at T-2, at least in my case. I’d been monitoring the stream environments for years. I felt like a “waterdog,” the monitors who regularly check on regional trout streams for potential problems caused by the fracking of Marcellus Shale for the gas locked far below the earth’s surface.

Waterdogs keep their eyes on the streams and rivers, ready to report a problem caused by this controversial drilling method or by other sources. 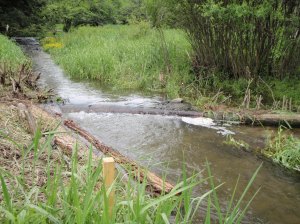 It was easy to identify, in part, with the character Boone Caudill, who had a vision of the wilderness that was. I understood, however, that what was here and now, a mere sliver of the wild, could never revert completely.

The wild country had been minimized, to say the least, and yet wildness still remained. We couldn’t afford to lose the little that was left.  You could see it there, if you stepped aside and looked.

The T-2 volunteers had taken a small step aside at the headwaters. We gave the brook trout habitat a gentle nudge. With luck, a few souls in some future generation would also step aside and see it as the water looked today. 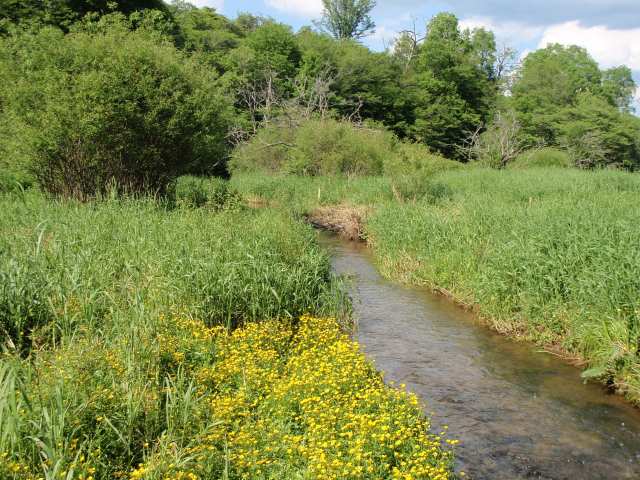 Welcome to Rivertop Rambles. This is my blog about the headwaters country-far afield or close to home. I've been a fly-fisher, birder, and naturalist for most of my adult life. I've also written poetry and natural history books for thirty years. In Rambles I will mostly reflect on the backcountry of my Allegheny foothills in the northern tier of Pennsylvania and the southern tier of New York State. Sometimes I'll write about the wilderness in distant states, or of the wild places in the human soul. Other times I'll just reflect on the domestic life outdoors. In any case, I hope you enjoy. Let's ramble!
View all posts by rivertoprambles →
This entry was posted in Uncategorized and tagged A.B. Guthrie, environment, fracking, history, motivation, mountain men, remoteness, Scouts, small streams, The Big Sky, water dog, westward movement, wild. Bookmark the permalink.