Posted on December 1, 2014 by rivertoprambles 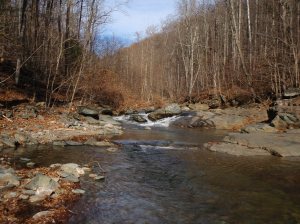 Virginia and in Shenandoah National Park. With snow covering the mountains above the North Fork and with the sun on my back, I took Thanksgiving morning to appreciate and give thanks for a lot of things in this crazy life of mine–for wandering freely on a mountain path beside a beautiful stream, for my friends and family and readers of this blog, and for the bounties of our small stressed planet.

On those rare occasions when I manage to catch a trout on my first cast of the day, I’m usually screwed for luck when it comes to catching number two. On my initial outing with the fly rod here, I did better– not only reeling in and letting go a brook trout on the first cast but then, at a second pool, catching a significant number two of the same wild species.

Not to put a price on sweet occasions such as this, I’d say that every good experience

outdoors has its cost in energy consumption and reality checks. After releasing the second trout, I decided to explore the rapids at the head of the pool by edging along a steep bank with sloping rock. There was ice on the logs and stones but I’d be careful. Several inches of water covered a descending shelf but my wading shoes were studded…

Well, my feet went out from under me, and the six to seven-foot depths of flowing water called my name. I was on my knees and slipping, growing fins as if I were a trout and really belonged down in the frigid but inviting run. One hand instinctively grabbed a root extended over the rocks and, still on my knees, I gave thanks to these old muscles… I would swim with the trout on a warmer day.

The next morning, Black Friday, was cold enough to build ice in the rod guides. So be it…

At least I wasn’t out compulsively buying stuff I didn’t need, like a puppet for the advertisers. I might have been displaying OCD with my trouting interests (as my wife suggests) but, for now, I chose to see myself as more of a producer than consumer.

The North Fork is a classic mountain stream recovering from floods and landslides that occurred some 20 years ago. There are stocked trout in the lower end, and miles of wild trout higher up. Although I limited my profile and its shadow on the stream, I didn’t catch a lot of fish. I did, however, catch enough to keep things interesting.

The water was icy cold but the native trout were pretty, and a couple of the wild ones measured close to a foot in length. One of the males, returned to the water and resting on the gravel near my feet, had attractive fins and made me wish my own appendages were as fine and useful.

My final day on the Fork was, for the most part, a pleasant coda to the previous outings. I had an opportunity to hike a little with my son and also caught another brook trout. While Brent hiked to a waterfall that I had nearly reached the day before, I

experimented with flies at a favorite pool, and complained to myself about a problem developing with my foot.

After Brent’s return, I limped back to the car and winced from the pressure of rocks on the bottom of my problematic toe. I listened to half-serious ideas of how, in not so many years, the kids would have to roll me in a wheelchair to a handicapped accessible ramp in order to go fishing. Yeah right, I thought…

And then I imagined swimming in the stream–with a set of trout fins, orange and white or otherwise, and thought how the fins might be a nice replacement for these feet. I thought of the Beefheart song, “Grow Fins.” No doubt I was too old to “take up with a mermaid,”  but to wear a coat of brook trout colors and to grow a set of fins was a pleasant thought at any age.

Welcome to Rivertop Rambles. This is my blog about the headwaters country-far afield or close to home. I've been a fly-fisher, birder, and naturalist for most of my adult life. I've also written poetry and natural history books for thirty years. In Rambles I will mostly reflect on the backcountry of my Allegheny foothills in the northern tier of Pennsylvania and the southern tier of New York State. Sometimes I'll write about the wilderness in distant states, or of the wild places in the human soul. Other times I'll just reflect on the domestic life outdoors. In any case, I hope you enjoy. Let's ramble!
View all posts by rivertoprambles →
This entry was posted in Uncategorized and tagged Black Friday, Blue Ridge, brook trout, Captain Beefheart, family, fins, fly-fishing, foot, friends, grow fins, holiday, mountains, North Fork Moormans, thanks. Bookmark the permalink.