Posted on October 23, 2014 by rivertoprambles

Part 14: On the morning of October 11, I found that the distance from bridge #5 to the former lumber camp known as Leetonia is about 1.1 miles along the narrow gravel road. I parked at the little bridge where I had left off on my previous leg of the Cedar Run Experience and proceeded to the “canyon.” 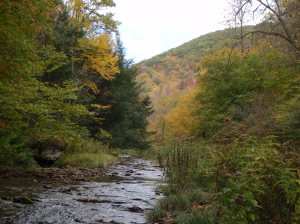 I figured I could fish half the canyon on a short autumn day and then return to the car. Anything more than that might have been biting off more than I could chew. I fished a small nymph, a beadhead Prince, with some success. Again, the fishing was difficult because of low clear water, but several holes, or deep pools, were productive with an upstream cast.

My favorite place here was the “Slanted Rock Pool.” It produced a small brookie and a couple of nice, colorful browns. The stretch didn’t feel as remote or canyon-like as I expected, though a steep, rocky cliff often separated me from the road above. On reaching a stand of tall red pines, I turned around and headed back, knowing I would soon return, but with a walk downstream from “the Meadows.”

I wasn’t quite ready to call it a day, so I drove to higher ground and parked near a camp at the Meadows. I had skipped the upper canyon, a distance of six-tenths of a mile, that I

would have to make up later on. The camp at the Meadows sent enticing smells of wood smoke into the air.

I found a ledge pool in a stand of evergreens where I caught two more browns that measured close to 10 inches each. These fish put up a lively struggle against the little Superfine rod (a 7-footer, for a 4-weight).

I fished upstream toward the car and fought my way through willow trees and alders. Trout were plentiful in the channel, and my hook-ups kept life interesting. I quit at the first bridge in Leetonia, having landed about a dozen trout this day, several of them sizeable browns.

Part 15: On the morning of October 18, I met Scott C. at the quiet place of camps known as Leetonia. At first, the sky was overcast, and the season’s first breath of snow swept by us as we suited up and laid out a plan of action.

I was in a new place, or possibly in an old place where I hadn’t been in ages. Inspecting one of Scott’s topographic maps, I felt my uncertainty about location vanish like a pair of ravens tumbling toward a mountain cliff, then breaking their fall at the last possible moment. 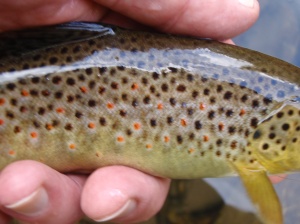 beyond a point where Buck Run enters the larger flow to start the special “Trophy Trout” regulations on Cedar Run. We would fly-fish a mile of headwaters, higher up than I had ever sampled the run before.

With short bamboo fly rods rigged with a Prince nymph and with a tandem dry fly and nymph, we stepped into wild trout habitat. The run soon looked like a headwaters stream, ranging in width from a three-foot channel (fairly deep) to about 12 feet (somewhat shallow). We found nice pools and undercuts, but also a lot of bedrock with a minimum of active redds.

We covered a mile of water in the vast Tioga State Forest on Cedar Mountain. Each of us

caught some trout, mostly small brooks and browns, but the fishing definitely picked up just before we had to leave the stream. The midday sun had started to warm the water, and the trout were rising to my Rio Grande King and to Scott’s dry Adams.

This wasn’t easy fishing. The casting lanes were often tight or non-existent due to high summer grasses, alder thickets, and overhanging hemlocks, but there were also pleasant, open glades to deal with, and the autumn scenery with its colored slopes was nothing to complain about.

At one point along the trek, Scott declared that, “Hardly anyone ever fishes here, but they should.” We wondered aloud why anglers tend to fish the special regulation waters like the Francis Branch (a Slate Run feeder) but ignore a similar stream like this (above the mouth of Buck Run where the special regs kick in).

“People like to fish the special regs water because they know there has to be fish in there,” I stated.

“Exactly!” said Scott, a veteran fisheries biologist who studies this sort of thing on a regular basis. “It’s all part of the psychology of fishing regulations.”

The solitude on upper Cedar Run was fine with me. Streams like Francis Branch might benefit by sharing some angling pressure with the run, but it wouldn’t be quite the same for a fly-fisher who enjoys a lonesome hour or a day in the wild.

Welcome to Rivertop Rambles. This is my blog about the headwaters country-far afield or close to home. I've been a fly-fisher, birder, and naturalist for most of my adult life. I've also written poetry and natural history books for thirty years. In Rambles I will mostly reflect on the backcountry of my Allegheny foothills in the northern tier of Pennsylvania and the southern tier of New York State. Sometimes I'll write about the wilderness in distant states, or of the wild places in the human soul. Other times I'll just reflect on the domestic life outdoors. In any case, I hope you enjoy. Let's ramble!
View all posts by rivertoprambles →
This entry was posted in Uncategorized and tagged Buck Run, Cedar Mountain, Cedar Run canyon, fall fly-fishing, headwaters, Leetonia, psychology, solitude, special fishing regs, The Cedar Run Experience 14/15, wild beauty, wild trout. Bookmark the permalink.