Posted on October 12, 2014 by rivertoprambles

Despite the afternoon wind and chilly temperatures, the sun was shining and I decided to check on the upper Genesee. Past experience told me that if anything was hatching from the river it would be the autumn sedge (a caddis fly) or the mayfly, Isonychia bicolor (aka Slate Drake). I was hoping for the Isonychia, which is probably my favorite hatch of late summer and early fall. 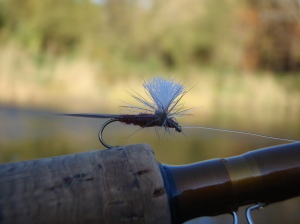 As I built a new leader at the river’s edge, I saw rise forms in the big pool and along the seams of the riffle feeding into it. The silhouettes of a large mayfly could be seen drifting on the surface, and I knew I was in luck. Tying on a standard Isonychia pattern, I got to work.

A nine-foot fly rod for a four-weight line is perfect for the upper Genesee which averages about 30 to 40 feet wide in the catch-and-release section of the river. A long cast to the far bank found a rise, and just like that, I was on to a first nice brown trout of the day.

The rise activity, and consequent action with the rod, was fast and easy for a while, but it didn’t last long. In about 20 minutes the hatch was over, followed by some minor ant flights and a caddis or two.

As Art Flick describes the mayfly in his Streamside Guide, “the forelegs are brown and the other two sets of legs are light yellow, which accounts for the fly’s name, bicolor.” This large mayfly has a dark bluish wing, a reddish-brown body, and is usually imitated with a size 12 hook. Oddly enough, I have found that the Genesee River version of Isonychia has a greenish body and resembles a Blue-winged Olive on steroids.

I’ve seen this fly hatch as early as May on some waters, and as late as October in others,

but whenever it hatches, it is bound to engage the feeding trout.

Unlike most mayflies that, in nymphal stage, rise to the surface of the stream, the Isonychia nymph swims quickly to the bank and usually surfaces on a rock or boulder. The collected shucks are a common sight for anglers with an eye to bug activity. The insect hatches out on land, but often on a windy day (like the one just fished), it’s blown onto the water and set adrift.

The trout find them and begin to feed voraciously. In my experience, an exact imitation of Isonychia is seldom necessary.

My favorite dry fly imitation is a simple parachute. I begin this Slate Drake pattern by tying in a few dun-colored fibers for a tail. Then I build a white calf-tail post about two-thirds of the distance to the eye. For the tapered body, I use claret or burgundy dubbing. For the wings, I tie in a dun-colored hackle and wind it several times around the post .

Many years ago, when I first discovered this mayfly hatching on upper Pine in Pennsylvania, I had caught a few trout on the pattern but then lost my last fly of its kind. Realizing that some of my best catches with a dry fly might result from casting an Isonychia pattern, I made haste to find another. Upstream at West Pike was a tackle shop owned and operated by Jack Mickievicz, an outfitter who often fly-fished Genesee Forks and other area streams… Jack was out of Slate Drakes at the moment, but he told me what to do…

“Try a Royal Coachman or a Royal Wulff as substitute.” At first, it didn’t seem logical to me. A red and white attractor for a drab gray mayfly? Yeah, and of course, it worked.

It’s all part of the mystery and beauty that surrounds this fly, an angler favorite. Look for it on a blustery afternoon this fall. At other times, a nymph worked in toward the bank may be productive. When you see adults drop to an evening stream to lay their eggs, try a #10 or #12 Rusty Spinner on the surface.

Isonychia bicolor is a fascinating mayfly, and finding it at any stage of its life-cycle might be followed quickly by some lively action on a tightened line. 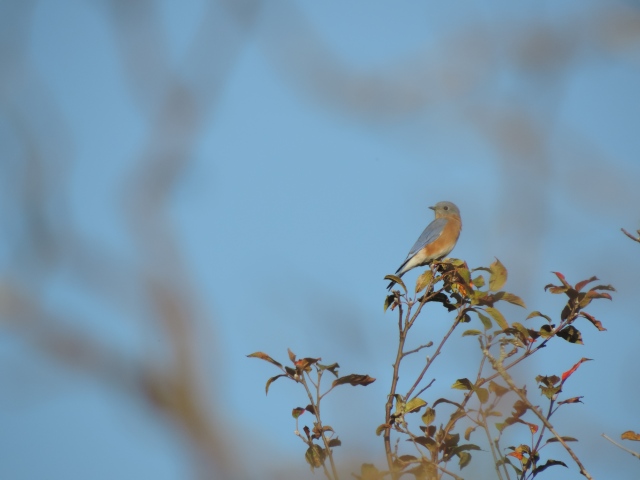 Welcome to Rivertop Rambles. This is my blog about the headwaters country-far afield or close to home. I've been a fly-fisher, birder, and naturalist for most of my adult life. I've also written poetry and natural history books for thirty years. In Rambles I will mostly reflect on the backcountry of my Allegheny foothills in the northern tier of Pennsylvania and the southern tier of New York State. Sometimes I'll write about the wilderness in distant states, or of the wild places in the human soul. Other times I'll just reflect on the domestic life outdoors. In any case, I hope you enjoy. Let's ramble!
View all posts by rivertoprambles →
This entry was posted in Uncategorized and tagged Art Flick, brown trout, dry fly fishing, Genesee River, home river, Isonychia bicolor, Jack's Tackle, mayfly, nature observation, Royal Coachman, Slate Drake. Bookmark the permalink.