Two Steps Forward (No Step Back)

Posted on October 7, 2014 by rivertoprambles

Step 1: The rain did not deter our weekend plan to visit Rock Run, near Ralston, PA. The run was flowing almost as clear as it was a month ago on my initial visit. Several outdoor writers have declared that Rock Run is the most spectacular stream for scenery in the state of Pennsylvania. After today, I have no reason to dispute their claim.

Leighanne and I enjoyed a stroll along a classic stretch of cabin, pool and ledge. The sense of solitude was perfect in the rain.

I fished for a while and lost a heavy trout while drifting a tandem wet fly rig. I’m adding Rock Run to my list of trout streams in the wild country worthy of regular visits.

Step 2: The next morning I was back at Cedar Run, resuming the “Experience” (Part 13) of fishing the entire eleven-mile stream in consecutive segments.

The region had just experienced its first frost of the season, and the morning air, though overcast, was decidedly brisk. Despite some recent rain activity, Cedar Run was still low and clear and 49 degrees F., a tough one to be fly-fishing now.

I approached the deep pool near the mouth of Fahneystock Run and put aside my casting for a while. For me, this outing on the stream was special. I was celebrating, in a sense, the reprint of my fly-fishing book called River’s Edge, and here, close to the Fahneystock Pool, was the place where I almost lost an eye while fishing close to 30 years ago (God, has it really been that long?).

I wrote about that incident in River’s Edge, and for one or two shameless reasons, I would like to quote now from a chapter called “Fishing the Runs”– 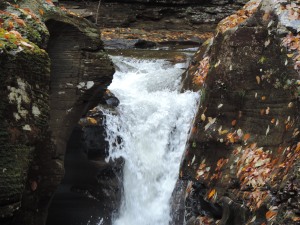 “I had foolishly neglected to wear my protective sunglasses that cloudy day, but I had been intuitive when it came to insects. I recall a yellow stonefly that rose from the stream and landed on my wrist. The insect seemed to say, ‘Use a dry fly imitation of me,’ so I found my best stonefly imitation and pinched down the barb. I began to catch little brooks and browns one after the other, but as rain began to fall and as I started losing some larger, heavier trout, exasperation set in. 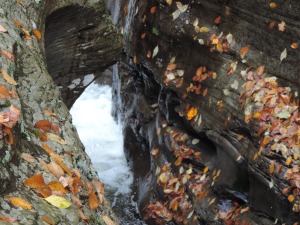 “I hooked the stonefly snugly into a willow branch across the deep run. I yanked moronically on the leader and on the fly. When the line, leader and fly tore loose, the fly came at me like a stone fired from a slingshot. By virtue of a miracle, or dumb luck, I had blinked at the critical microsecond that the bullet made an impact on my right eyelid– on the eyelid rather than on the jelled orb beneath. I still shudder when I think of it.

“I recall staggering backward to the bank and falling on my knees. Every little tug on the line and leader produced pain. I cut the leader with my teeth, and blinked to assure myself I still had vision from the eye.” 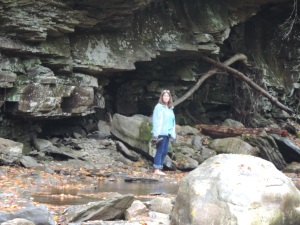 If you don’t have a copy of this book, I hope to get you interested in it somewhere down the line. As for my ordeal on Cedar long ago, let me say that it was far from over at that point. In likelihood, there was no one else around to lend assistance, and the nearest medical center was more than 40 miles away.

If a hook embedded in an eye is any indication of whether or not a fish feels similar pain from a hook, let me say that I am sympathetic after all these years.

River’s Edge has been updated and reprinted by Wood Thrush Books in St. Albans, Vermont. Information can be found by clicking on my link to Amazon Books (and the “Look inside” button), or by checking in at Wood Thrush Books (see sidebar), or by inquiring here at the blog.

I  moved upstream. Cedar Run has several deep pools with underwater ledges in this stretch, and at one of them I spooked a fish that shot out from its hideaway in hot pursuit of safety. It reminded me of a small blue submarine, a behemoth nearly impossible to catch in these low water conditions.

Oh, I caught a few small ones, and broke off a couple of bigger trout because of heavy-handedness. I was hoping for rain to come and raise the level of these beautiful streams in northern Pennsylvania.

I’ll soon be ready to tackle the remote canyon at Cedar Run, followed by an interesting section called “the Meadows.” With luck, it won’t be long before I reach the ghost town called Leetonia, and then my destination at the headwaters on Cedar Mountain.

Welcome to Rivertop Rambles. This is my blog about the headwaters country-far afield or close to home. I've been a fly-fisher, birder, and naturalist for most of my adult life. I've also written poetry and natural history books for thirty years. In Rambles I will mostly reflect on the backcountry of my Allegheny foothills in the northern tier of Pennsylvania and the southern tier of New York State. Sometimes I'll write about the wilderness in distant states, or of the wild places in the human soul. Other times I'll just reflect on the domestic life outdoors. In any case, I hope you enjoy. Let's ramble!
View all posts by rivertoprambles →
This entry was posted in Uncategorized and tagged "River's Edge" second edition, autumn fly-fishing, canyon, Cedar Run, Cedar Run Experience Part 13, eye-injury, Fishing the Runs, fly-fishing literature, meadow, Rock Run, wild trout, Wood Thrush Books. Bookmark the permalink.

12 Responses to Two Steps Forward (No Step Back)