It’s A Beautiful Day (For Fish)

Posted on April 8, 2014 by rivertoprambles

The Lake Erie trib was flowing high and muddy, but the sun was out by mid-morning

and the sky was April blue. The air temperature would rise into the 50s today, and the water temp would reach a mild 43. There was hope for success, even though the stream was as high and muddy as I’ve ever seen it, even though the last few steelhead seasons for me have been minimal affairs.

Gone were the days, not so many years ago, when a fly-fisher could hit a tributary of Cattaraugus Creek, or even the big stream itself, in early spring and catch upward of 20 steelhead in a day. Those days were gone because new landowners posted the water now, or wanted steep fees for the privilege of fishing there. And some of the problem was due to fishermen themselves, who socialized too freely on private lands and left their garbage behind.

Anyway, it felt great to fish upstream in solitude for more than a mile, searching for lake-run trout in the likely holding waters. I enjoyed casting streamers with my old South Bend 7-weight while listening to the birds and finding animal tracks in the mud. In addition to coon and mink and heron tracks, I found the possible paw prints of a fisher– the furbearer, not the fly-flinger (although I saw his boot tracks, too). I enjoyed working my way to the gorge, but I never saw a single fish. 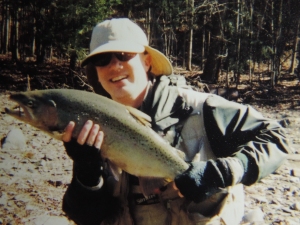 Several young men with spinning rods raced by me to reach the falls where the fish could swim no farther. I would learn that they saw a couple of steelhead there and even had one briefly on the line. But for the most part, there were no fish being caught on this stream today. For the most part, the spring run hadn’t yet reached this tributary 40 miles above the lake.

Usually the spring run of fish is well under way by this point in April or, as in the past few years, it’s mostly over at this time. Walking from the gorge back to the car, I looked into the cloudless sky and had good news for the trout (as if they didn’t know)– we caught no fish. The water was warming. It was time to lay some eggs.

beautiful day he’d had (while I was out traipsing around for steelhead). On his i-phone were images of a 24-inch rainbow he had caught while fishing Cold Brook with his father. He would show these photos through the day at every opportunity.

The water had been cloudy, and no one on the stream was catching fish (sound familiar?). He’d been fishing from the rocks where the water swirled deeply and took his egg-sac (on a single hook) to the bottom. He was apparently beside himself when the fish hit, when his dad rushed over and counseled him on how to keep the line taut and how to stay cool when the big spawner leapt into the air. 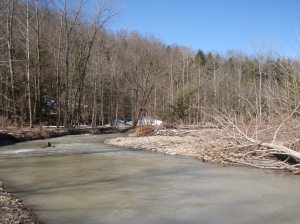 I told him he did well. He did a whole lot better than me. I wouldn’t have it any other way.

On Sunday, while walking down the steelhead stream in excellent weather, it seemed natural to peer at the azure sky and think of the late 60s, early 70s folk-rock/psychedelic band called It’s A Beautiful Day.

The band’s artistry was unique among the groups that issued from the fertile San Francisco music scene of the period. Essentially a vehicle for the classically-trained violinist David LaFlamme, It’s A Beautiful Day peaked with its superb self-titled debut album of 1969 [youtube/it’sabeautifulday/fullalbum]. The album’s six-minute introduction called “White Bird” established the band as a progressive and sophisticated stand-out in a heady period of musical expression. 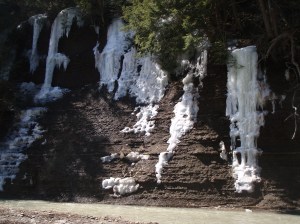 the day, and I often heard it spun from college dormitories, campus center, and pubs. Four decades later, while tramping from the fishless wilds and exploring the limits of exhaustion, I heard the vocals and instrumentation of “White Bird” in my head.

It was like I’d been wrestling steelhead all day long. I felt both young and old. I had an ancient cane rod in my grip. I almost had a pair of wings.

Welcome to Rivertop Rambles. This is my blog about the headwaters country-far afield or close to home. I've been a fly-fisher, birder, and naturalist for most of my adult life. I've also written poetry and natural history books for thirty years. In Rambles I will mostly reflect on the backcountry of my Allegheny foothills in the northern tier of Pennsylvania and the southern tier of New York State. Sometimes I'll write about the wilderness in distant states, or of the wild places in the human soul. Other times I'll just reflect on the domestic life outdoors. In any case, I hope you enjoy. Let's ramble!
View all posts by rivertoprambles →
This entry was posted in Uncategorized and tagged "underground music", Cattaraugus Creek, fisher track in mud, fishing with kids, It's A Beautiful Day, Lake Erie trib fishing, steelhead fishing, White Bird. Bookmark the permalink.

10 Responses to It’s A Beautiful Day (For Fish)