With an air temperature of 23 degrees F., and with gusts of wind and cloud-cover, fishing wasn’t bound to be particularly comfortable today. I was willing, however, to give the fly rod an hour or so of exercise. I could always chalk up the experience to a scouting 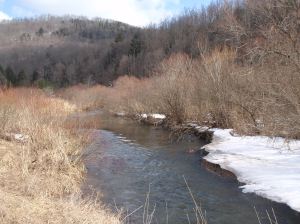 venture. Bundled up inside my waders, I was ready to muddle along, to deal with gloved hands, iced-up guides, tangled leader, clumsy casting, and diminished hope.

Hell, there wouldn’t even be stone flies hatching on the river today. If I could catch one trout, however, that would be a bonus for enduring some challenging weather. With just a single fish, it was possible that my frozen fingers and runny nose would forgive me for abusing my own body.

Well, the Egg fly stopped at mid-drift through the deep Meadow Pool, and I was on to something. Ah, my bonus for the day! And the fish seemed better than average for a headwaters stream.

I let the fish run past the far side of an underwater tree. I mended the fly line up and over the submerged branches, and soon the fish was in the net. Seeing how the trout filled up the mesh, I thought for a moment I had taken my first 20-inch rainbow of the season.

I could have let it go at that, but who was gonna believe that my only trout of the day was 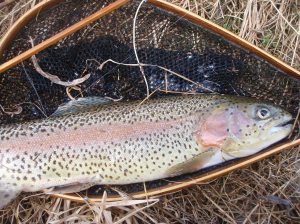 20 inches in length? I pulled out my rusty old Zebco Fisherman’s De-Liar, the measuring tool I’ve owned since age 13, and I proved myself… wrong. I heard a voice say, “Walt, you idiot, that’s a nice fish, but you’ve got to tell the folks it’s only 18 inches long.”

Okay, I thought, a good trout. Thank you Allegheny River. I’ll be back for more, but it’s cold out here, and my hour’s almost up.

Had it not been for this single trout, I probably would have questioned myself for coming here at a time like this. Although I often say that fishing is a whole lot more than

catching fish (which I’ll stand by), I’m glad I didn’t have to prove it this afternoon. Even the Canada geese seemed to huddle around the open water, complaining in the way of anxious fowl.

Driving home, I was feeling pretty good as I began replaying parts of my Daniel Lanois CD, “Acadie,” a gift from my friend in music, Dr. G. This album, a true North Country classic with an undercurrent of New Orleans supernaturalism, is considered to be among the best Canadian albums of all time [youtube/daniellanois/acadie]. What I find especially striking is the final cut, the old traditional “Amazing Grace,” with Aaron Neville at the vocals. 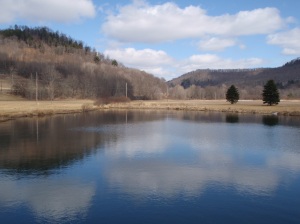 In all my years I’d never thought much of the tune until hearing it sung by Neville on this album, accompanied by Brian Eno’s expertise and by Lanois’ unparalleled production skills. The famous song, played loudly on this occasion, was enough to bring an old angler wretch to his pagan knees, to plead mercy for his sins to a Maker on High…

What really saved me was a vision of a rainbow trout coming to the net once more. I mean, it had a glint of sunshine on its median line!

Who said fly-fishing couldn’t be a spiritual experience?

Welcome to Rivertop Rambles. This is my blog about the headwaters country-far afield or close to home. I've been a fly-fisher, birder, and naturalist for most of my adult life. I've also written poetry and natural history books for thirty years. In Rambles I will mostly reflect on the backcountry of my Allegheny foothills in the northern tier of Pennsylvania and the southern tier of New York State. Sometimes I'll write about the wilderness in distant states, or of the wild places in the human soul. Other times I'll just reflect on the domestic life outdoors. In any case, I hope you enjoy. Let's ramble!
View all posts by rivertoprambles →
This entry was posted in Uncategorized and tagged Aaron Neville, Allegheny River fly-fishing, Amazing Grace, cold-weather fly-fishing, Daniel Lanois "Acadie", fishing as spiritual experience, fishing is..., rainbow trout, Zebco De-Liar. Bookmark the permalink.