The Final Word (A Recollection)

Posted on January 12, 2014 by rivertoprambles

moved into Rivertop country. By choice, our new home was a place of relative isolation with a willful exclusion of major media sources. Television had no welcoming corner in our house. The use of radio was limited, at least for a while. In those early days of our new settlement, before my wife and I were married, our primary goals were to find new jobs and to make the old farmhouse livable.

Our knowledge of current world events came primarily through social contacts such as the one I made in town the morning I picked up photographs of our new place. After hearing someone declare that Egypt’s President Sadat had been assassinated, I drove to the “Rivertop Restaurant” for coffee and to study the newly developed photographs.

As in any small community the world over, this local town had an individual who, in less enlightened eras, might have been labeled the “village idiot.” It’s a stereotype in which we might see a sociable and mentally handicapped person idling about the shops and alleys possibly searching for odd jobs such as mowing lawns or shoveling snow. Often given respect for being “special,” this person may at other times be the butt of someone’s ill-considered wisecracks… “Did you hear about So-and-So and his living room lamp? He was walking down the street, carrying a lamp, so I asked him where he was going. Said he was headed to the hardware store– to buy a new light bulb… Haw!” 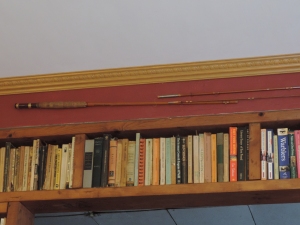 I had just been seated in the restaurant when Stoney entered and took a chair at my table. I’d never met this middle-aged fellow before, but I sometimes saw him as I passed through town. I wasn’t sure about his name. I’d heard several people call him Stoney. Was that a nickname derived from a family name of “Stone”? Did it come from a pejorative description of his mental state, as if he was literally a man of stone?

His facial characteristics suggested Down syndrome. His brown and white shoes did

nothing to help him fit in with the passing crowd. I learned that he was deaf and that he spoke with mostly indecipherable utterances. Sensing that he couldn’t communicate well with me, despite his sharp gesticulations, Stoney pulled a small notebook and a pencil from his pocket and began to write.

The words he shared were surprisingly legible. “Sadat is dead.” I acknowledged his report. He then wrote, “World War III.”

A wave of apprehension washed over me. Stoney continued, “On the TV. 1700 silos.” Holy crap, I thought. Had I missed some vital news report? Stoney glanced from side to side, then paused to write the word, “Missiles.”

What was he, a lunatic, a prophet, or a mentally deficient Pentagon official? If Stoney was correct and factually reporting the news, then, my god, I thought, what a hell of a place to hear of Armageddon– in a small town greasy spoon!

I tried to change the subject and communicate my interest in being alone. I glanced at

the photos lying on the table. Our place. Our “stay against confusion,” as Frost would have it. Our refuge from the madness of the world. Then I wondered about Stoney’s place. Did he have a place with family or friends? Was he molded perfectly with his place this very moment, every moment, hence his eccentricity? Were the questions moot in light of mental retardation?

Stoney wrote new words with painful deliberation. “The world is in bad shape.” I felt like saying, “Man, you’ve got that right.” His kind of message, often tossed about casually by special interest groups to gain a share of converts, was inscribed with something like sincerity and wisdom. There was no way to dispel his presence.  I took his paper and pencil and wrote, “You bet!”

In the last minute of this only exchange I had with him, Stoney wrote a single word. In context, it was the most affirmative and disconcerting of all that he had written. The final word he wrote for me was, “Life.”

Welcome to Rivertop Rambles. This is my blog about the headwaters country-far afield or close to home. I've been a fly-fisher, birder, and naturalist for most of my adult life. I've also written poetry and natural history books for thirty years. In Rambles I will mostly reflect on the backcountry of my Allegheny foothills in the northern tier of Pennsylvania and the southern tier of New York State. Sometimes I'll write about the wilderness in distant states, or of the wild places in the human soul. Other times I'll just reflect on the domestic life outdoors. In any case, I hope you enjoy. Let's ramble!
View all posts by rivertoprambles →
This entry was posted in Uncategorized and tagged country narratives, Down syndrome, home place, Life, madness, Robert Frost, sense of place, social media, WW3. Bookmark the permalink.

4 Responses to The Final Word (A Recollection)