From a Favorite Stream, to You

Posted on December 26, 2013 by rivertoprambles

The stream flows through a rugged hollow in rivertop country. It joins a branch of the river near its headwaters. The river, itself, flows north and empties into Lake Ontario, and eventually the waters merge with the Atlantic.

The stream, always deep within a forest, is never more than six to eight feet wide, and forms one of my favorite brook trout haunts. It nourishes a roadless area of roughly eight square miles although, technically speaking, a gated jeep trail runs along the stream, sometimes on a slope above the water, sometimes closer to its side, connecting several hunting camps along its three-mile route.

The stream is nourished by a multitude of springs that keep it cold in summer and free of ice in wintertime. It’s a place of solitude and peace and wildness that is never lonely. For this reason, as well as for its own integrity, it needs protection from the specters of pollution and industrial greed.

A week ago I walked a mile of the stream. Fresh snow lay on its banks. Today (just before a major holiday) I made another visit, fishing, after heavy rain and snow-melt had brought a flush of color to the flow. My small window of fishing opportunity was streaked in a mix of rain and snow. 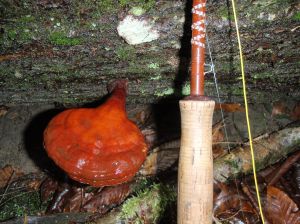 It was basic fly-fishing. Tight and challenging, with a short rod and leader, with an underhand or bow-and-arrow cast. I dropped a weighted fly into likely holding areas. It was good to be out on the stream once more, where the only other sign of human presence was a string of mink and coon traps waiting for a paw.

Several brook trout bit the fly but quickly got away. Then, in an eddy just below a massive root wad, I got a surprise– a wild brown, a nice fish, rather than the usual native. I was glad for the quick photo and release, but the new presence of brown trout in a native brook trout stream was a matter of concern, or at least a serious question.

With the latest angling news aside, I offer such a place, this stream, in the hope that it reminds you of a similar locale. It could be any natural area, or green niche, that is special– worthy of your exploration and appreciation. From this rivertop to that special place within you, a wish for a happy and healthy new year. May the land and waters be sustainable and clean, for you and yours and the environment beyond. 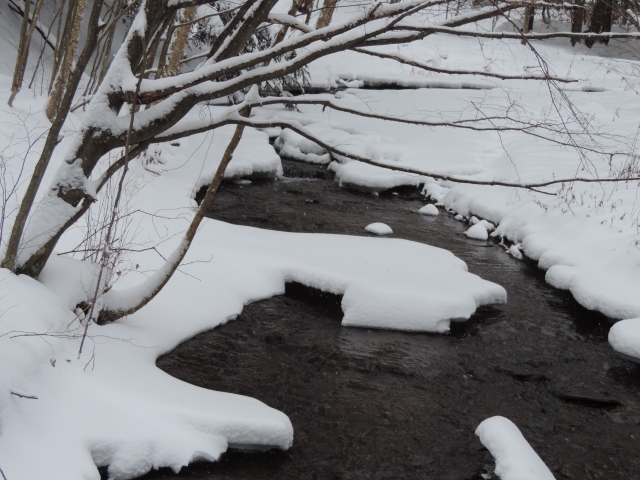 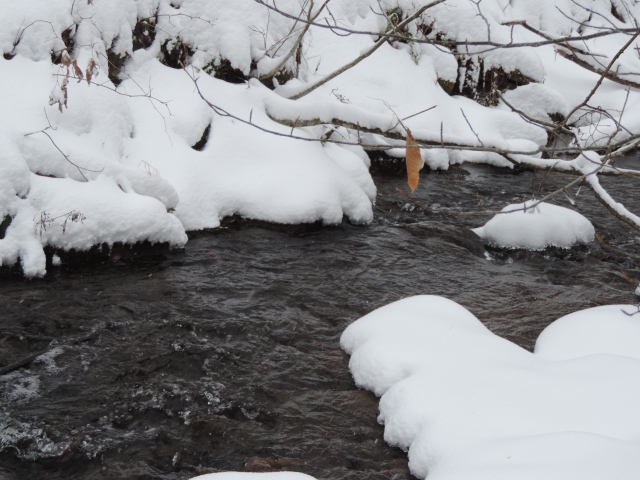 Welcome to Rivertop Rambles. This is my blog about the headwaters country-far afield or close to home. I've been a fly-fisher, birder, and naturalist for most of my adult life. I've also written poetry and natural history books for thirty years. In Rambles I will mostly reflect on the backcountry of my Allegheny foothills in the northern tier of Pennsylvania and the southern tier of New York State. Sometimes I'll write about the wilderness in distant states, or of the wild places in the human soul. Other times I'll just reflect on the domestic life outdoors. In any case, I hope you enjoy. Let's ramble!
View all posts by rivertoprambles →
This entry was posted in Uncategorized and tagged headwater springs, headwater streams, hiking to river sources, protecting river sources, roadless areas, wild brook trout streams. Bookmark the permalink.

19 Responses to From a Favorite Stream, to You