Posted on December 11, 2013 by rivertoprambles

Nature writing, at its best, engages readers with the raw, unmodified earth, the wild

planet found in such disparate locales as a city park or the ice plains of Antarctica. In  a day when people are increasingly empowered by computers and the digital realm, nature writing may remind us that our bodies and our senses are significant. Whereas the dreams of mankind may include the wish to download the entirety of the human brain on a silicon chip, (no problem in my case, folks!), the dreams of nature writers may include the wish to make sense of our time on earth. Whereas society may view all nature writing as just another child fed to the fiery bowels of Moloch, writers will drag their feet and resist the head-long rush to sacrifice the green world for a coin.

How the Sun Returned to Earth

It was the middle of December. I’d already caught a steelhead from the gorge, an average-sized male of 26 inches, bruised and battle-scarred, so I didn’t feel the need to catch another. The pressure of the “skunk” was off. The ice-draped gorge was like the inside of a bare refrigerator, with the bulb burned-out. I was eager to return downstream to the warmer, gentler valley, and to watch for another fish as I made the long hike to the car. 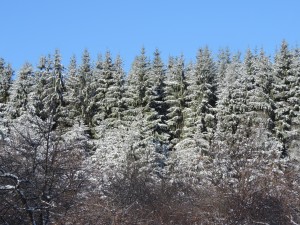 I saw, or imagined, the flicker of a shadow or a motion in the clay-colored stream. I was on the cusp of two realities, and made a long cast of the streamer. The white maribou, the palmered hackle, the glow-bug head, drifted toward the motion. Suddenly the shadow took substance, a storm of rod-bending energy. I don’t know who controlled whom in that struggle over land and water, but at last the fish quieted and sulked, and let me to reel it toward a landing.

The light-colored hen, spectacular at 30 inches or more, had eggs to lay for her race. I don’t have a picture of her now; I’m not even sure that she was real. If pressed, I would say that her eggs were finally set in gravel, that a few may have hatched and actually grown. I know that I left the walls of snow and ice and weighted trees. I entered the lower valley as if in another season. The sun felt like a stroke of newborn life. A stranger had come, like a baby in the straw.

When the Earth Quakes 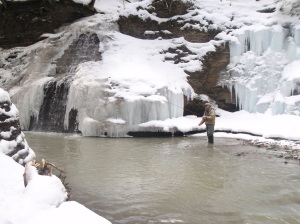 When the earth quakes, I am fishing downstream of the rivertops in wicked summer. I am downstream of the trout that take another hit from climate change. I’m smallmouth fishing near the city, entering the riffles where my chance is best.

I’ve watched the larger bass rise for mayflies in deep water, and I’ve waded toward the bridge. A tiger muskie lurks at the bridge supports beneath the lengthy span. The wind has kicked it up a notch; the casting is a challenge.

When the earth quakes, a hefty smallmouth takes the fly. Dirt and metal tumble from the four-lane overpass. The dirt gets in an eye despite my glasses. Is it from the wind and crazy traffic rushing by? The phone rings from a pocket in my vest. She asks if I felt it– the 5.9 on the Richter Scale that rippled northward from Virginia.

No, I didn’t feel a thing. I had a smallmouth on the line. That bridge had no desire to come down.

Welcome to Rivertop Rambles. This is my blog about the headwaters country-far afield or close to home. I've been a fly-fisher, birder, and naturalist for most of my adult life. I've also written poetry and natural history books for thirty years. In Rambles I will mostly reflect on the backcountry of my Allegheny foothills in the northern tier of Pennsylvania and the southern tier of New York State. Sometimes I'll write about the wilderness in distant states, or of the wild places in the human soul. Other times I'll just reflect on the domestic life outdoors. In any case, I hope you enjoy. Let's ramble!
View all posts by rivertoprambles →
This entry was posted in Uncategorized and tagged bridge supports and fishing, creation myth with fish, earthquakes in the East, Nature writing, smallmouth on a fly, steelhead on a fly, walt franklin on writing, Winter Solstice, writing purpose. Bookmark the permalink.

8 Responses to Winter Dreams, With Fish