Posted on October 14, 2013 by rivertoprambles

regulations), I visited a rivertop brook to tell the fish adieu. The season was shutting down; I would not be wading its pools or stepping across its narrow form again until the coming spring. The federal government had nothing to do with this. It had more to do with science and New York State philosophy than with the actions of our idiot politicos, although admittedly, the distinctions might seem arbitrary at times.

It was a gorgeous autumn day; I’d been rambling over the hills for hours. Now it was time to say goodbye to a few of my favorite little streams by casting to their trout once more. When the angling season was closed, the fish were on their own, as evolution intended. They would spawn without aggravation from me or any other crazed and hopeless angler.

The brook, dropping through the foothills near the NY/PA border, is one of the remotest in the state, outside the designated wilderness areas. It’s cold and clean, and small. In many places along the stream I can jump from bank to bank, especially in a dry season. But in one location it makes an impressionable exit from a large culvert beneath a gravel road. It  forms a deep pool that measures roughly 30 feet wide by 50 feet long. The pool is full of native trout. 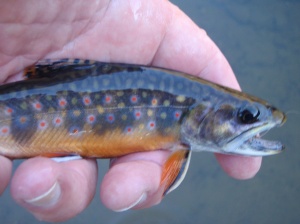 I approached the pool from its lower end. I had an hour or two to fish. I carried a 6-foot rod that throws a 4-weight line. The Elkhair Caddis was the only fly I needed.

With every few casts, I hooked a trout (and occasional chub). The brookies were small, none of them greater than nine inches, but their beauty made up for what they lacked in size. After 50 minutes of casting I released my 21st trout and called it quits. I didn’t want to stress the pool too much.

Given such action in a tiny stream, it’s critical to use a barbless hook and to lift the fish from the water (if at all) for as little time as possible. Usually the hook slips easily from a corner of the lip and the fish swims away unhurt. But let’s not fool ourselves. Fishing remains a blood sport, and even with the use of barbless flies we lose one now and then. Whether we’re practicing catch-and-release or not, it’s always best to try and minimize our impact on the ecosystem.

The regular season was shutting down. The sun was setting and the air was growing cool.

It seemed like a natural closure, modest in comparison to the clamp-down from the Palace of Political Parties. Sure, I could fish the streams of Pennsylvania, as long as I continued to catch and release, but New York has different regulations. There’s no government shutdown involved; it’s just the way it’s been for years on end. 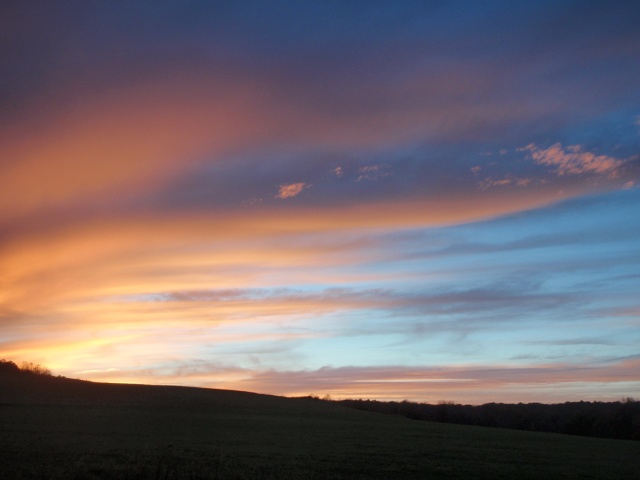 Welcome to Rivertop Rambles. This is my blog about the headwaters country-far afield or close to home. I've been a fly-fisher, birder, and naturalist for most of my adult life. I've also written poetry and natural history books for thirty years. In Rambles I will mostly reflect on the backcountry of my Allegheny foothills in the northern tier of Pennsylvania and the southern tier of New York State. Sometimes I'll write about the wilderness in distant states, or of the wild places in the human soul. Other times I'll just reflect on the domestic life outdoors. In any case, I hope you enjoy. Let's ramble!
View all posts by rivertoprambles →
This entry was posted in Uncategorized and tagged catch-and-release, fall fly-fishing, fishing small streams, native trout, nature and politics, shutdown. Bookmark the permalink.

14 Responses to A Modest Shutdown