The Cedar Run Experience: Parts 1 and 2

Posted on June 2, 2013 by rivertoprambles

Odyssey,” which I covered in Rivertop Rambles from the fall of 2011 through the following year. The stream to cover next seemed to be Cedar Run. This sister stream of Slate has its source above Leetonia, Pennsylvania and empties eleven miles later into Pine Creek and the Susquehanna River drainage.

Again, my hope is to fly-fish a wild stream in the most rural (and somewhat protected) area of the state, and to cover it entirely, from its mouth to its source. The goal would be to become familiar with the stream, to know the creek’s rugged essence, its pools and riffles and mountain shadows, and to cover it sequentially, skipping nothing.

I’ll try to record the water’s voice and physical character over a one or two-year period. The story of my walk will get posted on this blog. The goal, physically, is to reach the confluence with Buck Run, 7.2 miles above the mouth of Cedar Run. This whole length of Cedar Run is classified as “Trophy Trout Water,” a special fishing regulation that I’ll talk about in later posts.

As with Slate (the wild trout stream five to 10-miles southward), I’ve been fishing Cedar Run occasionally for 25 years or more, but I still don’t have a clear view of its nature. Fishing all of Slate Run in a one year period certainly helped me understand that beautiful stream, and I’m hoping for similar results with Cedar.

I began the “Experience” late in the afternoon of Memorial Day, 2013. I started on Pine Creek where the cold, clean waters of Cedar Run pour in along the western bank. Pine Creek was looking good. Kayakers were drifting by; anglers could be spotted here and there. An attractive lady wearing a bikini and piloting her kayak shot by only 30 feet or so from the end of my fly line. Being an old fisherman, I found it relatively easy to mind my own business… and stay focused on rising trout.

Casting a Green Drake to a riffle where I’d heard a surface splash, I hooked a heavy trout that charged toward the mouth of Cedar Run and broke away. With the green light given by an attractive kayaker and a hefty fish, I advanced with confidence into the famous Pennsylvania freestone water looking for adventure.

Sulphur mayflies were hatching from Cedar Run. The water temperature was a cool 53 degrees. I quickly caught a small brookie and a brown trout on the dry fly, size 16. Then, at a pool that was braced by rapid water, I saw it…

At least two good fish were feeding at the head of the pool. Cedar is known for its excellent hatches and its wild browns that can grow to impressive lengths. The sulphur, a small yellow mayfly, noted for its hatch longevity and its numbers, was coming off the water and the browns were eagerly responding. 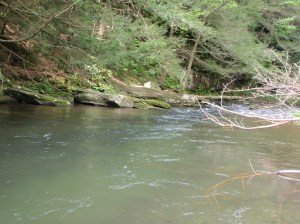 A fish took the fly and battled with amazing energy against the rod and the prospect of the net. With a quick photograph, the trout was released to swim again. The old streamwalker had begun another modest journey.

What a difference five days can make! On my return to Cedar, mayfly spinners were laying eggs on the surface of pools and pockets, and I thought, “Man, this could be good!” But the morning was heating up quickly; a shift in the weather was about to develop. The spinner fall was done in minutes. There were no trout feeding as far as I could tell.

Holes #1 and 2 (imaginatively named!) produced no action despite their possibilities and renown. These are classic pools with riffled heads and sheer cliffs reminiscent of the Slate Run Gorge. When the temperatures of Pine Creek warm up later this month, numerous trout will seek the cool waters of Cedar Run and swim up to the holes like #1 and #2. They’ll be almost impossible to catch. These shaded pools, with their dripping ledges and ferny overhangs, almost shout the presence of trout, but today they yielded nothing.

Neither dry flies nor nymphs were working for me. Other than one desultory-looking brook trout of consequential size that I kicked out from a grassy bank, I saw no trout activity at all. The air was hot and humid; gnats and mosquitoes were beginning to appear as I stepped through the woods. Despite the run’s excellent condition today, I quit after several hours of fishing. 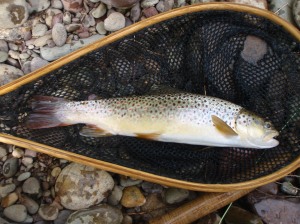 Thinking back, I knew the time hadn’t been wasted. There were tiger swallowtails that fluttered above the rapidly flowing stream. Louisiana water thrushes had whistled shrilly from the cliffs. I’d met a fly fisherman and his young son who were out to catch wild trout. They have a camp near the headwaters at Leetonia, and they helped me lay out a plan for my next leg of the journey.

From my point of departure today, I’ll have a mile of deep gorge to traverse upstream before a camp appears on the left. My map of Cedar Run suggests that the Blue Pool will appear about half way through the slot. The Blue Pool is the next destination.

Welcome to Rivertop Rambles. This is my blog about the headwaters country-far afield or close to home. I've been a fly-fisher, birder, and naturalist for most of my adult life. I've also written poetry and natural history books for thirty years. In Rambles I will mostly reflect on the backcountry of my Allegheny foothills in the northern tier of Pennsylvania and the southern tier of New York State. Sometimes I'll write about the wilderness in distant states, or of the wild places in the human soul. Other times I'll just reflect on the domestic life outdoors. In any case, I hope you enjoy. Let's ramble!
View all posts by rivertoprambles →
This entry was posted in Uncategorized and tagged Cedar Run, Green Drakes, Pine Creek Valley, Slate Run, Sulphurs, The Cedar Run Experience, wild brown trout. Bookmark the permalink.

8 Responses to The Cedar Run Experience: Parts 1 and 2