Posted on February 3, 2013 by rivertoprambles

“Brig o’ Doon” is the third in a series of Scottish Rambles based on stories and photos from daughter Alyssa who is spending a year in Scotland. Our previous viewing (Scottish Ramble #2) was called “Ye’ll Take the High Road.” Our new one comes from Alyssa’s recent visit to the Robert Burns homeplace and the river Doon, a visit made on the poet’s birthday, January 25. Burns’ “Tam o’ Shanter” famously narrates Tam’s drunken night ride over the “Brig” while being chased by witches. The eight pictures are selected from Alyssa’s photo essay “Rabbie Burns’ Birthday.”

Brig o’ Doon, the late medieval bridge over the River Doon is the scene for “Tam o’ Shanter” (1790), Burns’ dramatic narrative in which the horseback riding Tam is chased by witches and warlocks in the dead of night. Reaching the mid-point of the bridge and river, beyond which demons, traditionally speaking, were not able to go, Tam was saved by a hair. The tail of his horse broke off in a witch’s hand.

A small monkey puzzle tree stands beside the Doon. Incidently, this southeastern river has a good run of Atlantic salmon most falls, and its headwaters are said to have grayling, as well.

A view from the old bridge to the modern Brig o’ Doon and the Burns Memorial. 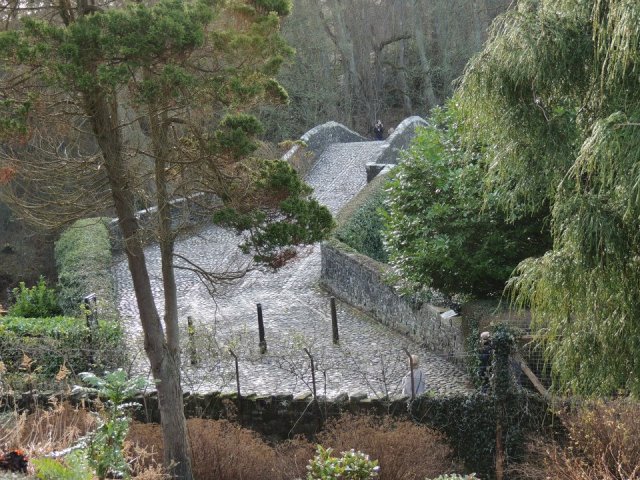 The high single-arched bridge near Alloway. A note for anglers: If harassed by demons, you may not be anywhere near a bridge like this, but if you can cross the middle of the stream in time, you should be able to make it home before the break of day.

The Burns Memorial. Scotland knows how to honor its wordsmiths!

Alyssa with the Wee Mousie… In “To a Mouse,” Burns not only penned his “best laid plans of mice and men” philosophy, but included… I’m truly sorry Man’s dominion/ Has broken Nature’s social union,/ An’ justifies that ill opinion,/ Which makes thee startle,/ At me, thy poor, Earth-born companion,/ An’ fellow mortal!…

And lastly, the images of bird and tree here seem to help frame a dark but wonderful scene out of “Tam o’ Shanter.” 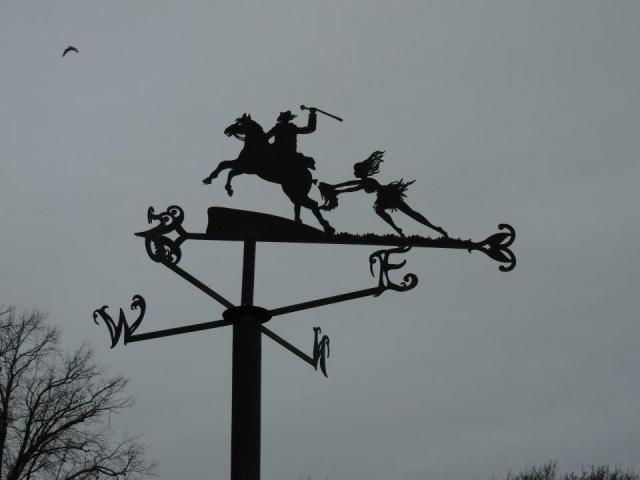 Welcome to Rivertop Rambles. This is my blog about the headwaters country-far afield or close to home. I've been a fly-fisher, birder, and naturalist for most of my adult life. I've also written poetry and natural history books for thirty years. In Rambles I will mostly reflect on the backcountry of my Allegheny foothills in the northern tier of Pennsylvania and the southern tier of New York State. Sometimes I'll write about the wilderness in distant states, or of the wild places in the human soul. Other times I'll just reflect on the domestic life outdoors. In any case, I hope you enjoy. Let's ramble!
View all posts by rivertoprambles →
This entry was posted in Uncategorized and tagged "Tam o' Shanter", "To a Mouse", Alloway, Brig o' Doon, Burns Cottage & Museum, Burns Memorial, monkey puzzle tree, River Doon, Robert Burns, Scotland, Scottish Rambles. Bookmark the permalink.