Posted on October 10, 2012 by rivertoprambles

At first, my descent into the gorge felt like a typical Monday morning in October, dark and 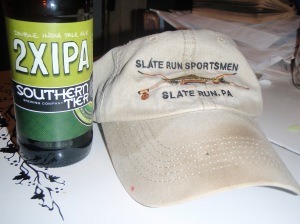 frosty, uninviting, but the picture brightened soon enough. It was Columbus Day, which meant a day off from work. Starting my Slate Run footwork at the Morris Run Bridge I headed upstream determined to cover a small stretch of water that I missed on previous outings. The cackling of a pileated woodpecker, and a sighting of this black-white, crow-sized bird sugggested a change of pace. Sure enough, the sun began to break through the fog and clouds and warmth began to seep into the gorge like water trickling down a streamside cliff.

I walked a mile of low, thin water and found that its temperature was 49 degrees F. I came to an enticing pool that I recognized from a visit many years before. This was the Washboard Hole, I thought, but conferring later in the day with Tom Finkbiner I discovered that I was wrong (again). The deep undercut riffle at the ferny ledge was, in fact, the Three Quarter-Mile Hole, but name aside, the spot looked like a big trout harbor so I edged in carefully from above, creeping like a drunken otter only inches from the cliff until I could snake my pair of wet flies through the hole… Nothing. No strike, no sign… but at least I tried. I wandered upstream till I found the point where I’d left off two weeks earlier. I could picture the next pool up above– the Washboard Hole and Riffle, plus the Beaver Pool, and the Shady Rest– a series of classic freestone structures that in better times would be wonderful locations to cast a fly. 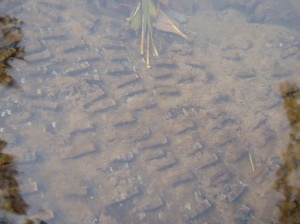 A half-hour walk returned me to the bridge where I pivoted and made the long climb to the car. Refreshed by food and drink, I drove on to an access point that I had used before, and thought about a Slate Run comment I had found on the Internet. This passage by James Marsh at Perfect Fly seemed appropo for a serious introduction to Slate Run: “You would think that one could fish its entire (7.5 miles) course in a relatively short time but that is far from being true. It flows through a canyon-like cut… the locals call the gorge. It has only a few access points that are close to a road. It is situated in rugged country and you must do some hiking up and down steep declines to get to some areas of the stream.”

True enough, Mr. Marsh, and allow me to add another point… If you make a dozen sequential visits to Slate Run, if you embark on a fishing “odyssey” and try to fish the stream in its entirety,  it’ll be helpful if you’re absolutely daft, at least when it comes to the pursuit of trout.

Taking off from my previous departure point 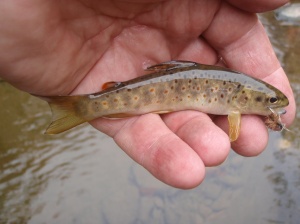 on the run, I found that the wading distance to the Seven-Mile Camping Area was relatively short. The only challenge was negotiating a bypass at the corpse of a massive pine tree that had fallen squarely across the flow. Downstream of the fallen tree, I had seen brown caddis hatching sporadically from the gravel bed and I had a bit of luck with a dry fly. There wasn’t much going on, but the little brooks and browns were, as they say, a good sign for the future of the sport. The trout were pretty (small), and I held them shamelessly for a moment in

the light. My walk continued. At the Seven Mile Pool, so limpid and inviting, there was no one home other than suckers, as far as I could tell. Arrival at the Seven Mile was a landmark for me. I was close to the start of Slate Run proper, close to the junction of the Francis and the Cushman runs.

Last year on this date I had slogged 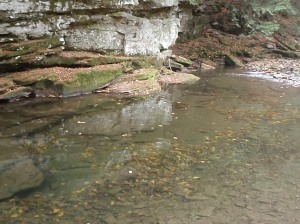 upstream through high water, the result of  heavy rains all season long. This past season had been just the opposite. There was little rain, and again this freestone creek has suffered. Many seasons of the recent decade have been less than optimal for trout conditions. Other stressors have been operational, as well. A great blue heron rookery had been located near the run until a massive storm took it out last year. Slate Run could very well be at an ebb in the natural cycle of its wild trout population, but the numbers will be back. I’m sure of it, as certain as I’ll be back to fish again this fall.

Welcome to Rivertop Rambles. This is my blog about the headwaters country-far afield or close to home. I've been a fly-fisher, birder, and naturalist for most of my adult life. I've also written poetry and natural history books for thirty years. In Rambles I will mostly reflect on the backcountry of my Allegheny foothills in the northern tier of Pennsylvania and the southern tier of New York State. Sometimes I'll write about the wilderness in distant states, or of the wild places in the human soul. Other times I'll just reflect on the domestic life outdoors. In any case, I hope you enjoy. Let's ramble!
View all posts by rivertoprambles →
This entry was posted in Uncategorized and tagged classic freestone, low-water challenge, odyssey, Seven-Mile camping, Slate Run, Slate Run stressors. Bookmark the permalink.