Posted on October 4, 2012 by rivertoprambles

It’s getting to be that season when an angler’s fancy turns to the big fish of the Great Lakes tributary spawn. I thought it might be interesting to revisit the Lake Ontario tribs by checking into the narrative “The River’s Edge,” a chapter from my book called 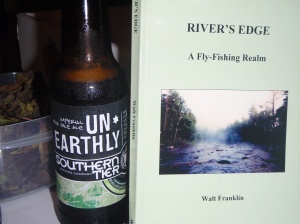 River’s Edge , published by Wood Thrush Books in 2008. The narrative takes a look at a fly fisher’s introduction to the world of big salmonids found on a spawning run from Lake Ontario. What I’ll do is excerpt from the chapter in the hope that it will be helpful to the novice angler and be entertaining enough for the experienced fisherman to have him or her want to read more from the book. This will be the first of two or three installments. Enjoy….

“I learned to fly fish for big salmonids relatively late in life. My classroom was Oak Orchard Creek, a Lake Ontario tributary between Rochester and Buffalo, New York. I’ve fished the stream innumerable times, in beautiful autumn weather and in near-blizzard conditions, from October to mid-April. Eventually I learned that a far better place to fly-fish for salmonids in New York is the Salmon River near Pulaski. Despite the fishing pressure on the Salmon, the famous river had more room to stretch out and back cast on than Oak Orchard had. It seemed more like a classic trout stream than the flat-water tributaries of Ontario. Further probing led me to my current favorite stream for Pacific salmon fishing. It’s a refuge from the angling crowds, a creek with ample room for the lover of solitude who seeks out the personality of a stream. The water has an ambience that, if not always inspirational, is at least scenic for the most part. Because its spawning salmon are numerous for a month or so in autumn, the place is not unknown. That said, I’ve promised several of its long-time fishermen I wouldn’t whisper its name even to my mother. The name, for anyone who’s interested, is attainable only through a course on

“Opportunities to wade and fish on Oak Orchard Creek for trout and salmon exist for only about a mile of water– from the hydro-electric dam downstream to a point where boats become advisable. Stream conditions are dependent on water release schedules of the hydro-station, but the Oak is generally fishable despite incredible angling pressure, especially at the peak of the salmon and the brown trout runs from October through November. At that time anglers should be ready to pay a daily parking fee at one of the stream’s two designated lots.

“A greenhorn angler out to educate himself at Oak Orchard will discover the ultimate classroom. Like a Daniel in a lions’ den of waters, he’ll be in for sink-or-swim casting, chuck-the-line-or-be-chucked-at fishing. The experience can be brutal or exciting or both, and a far cry from classic salmon fishing in the Northwest or in North Atlantic tributaries. But the fishery does provide the average angler an excellent chance to hook up with the specimen of a lifetime… 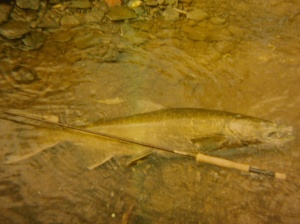 “Catch-and-release anglers can walk downstream of the dam in the hope of stumbling on a little more space and solitude. As Native Americans of the Pacific Northwest have believed, the fates of salmon and of man are intertwined, and downstream of the dam, an angler searching for a big fish might just reinforce that ancient truth. He might discover standing-room-only, with just a tight spot on a bed of zebra mussels available, but hope remains. After all, he gets his place only because another fisherman has to leave the stream in order to pee, and thus invites him to stand in his position. He’ll find that some of the fishermen are amiable and generous. They’ll console him when his blood starts to boil. Their soothing words will suggest that he is not alone in his endeavors, that they, too, have been trampled on and have survived. They’ll say something like, ‘It’s lucky the fish are used to these assholes. They don’t frighten easily. Here, try one of these little egg-patterns. You’ll get that brown. He looks like a ten-pounder.’

“There are artificial flies and hardware in the branches of the overhanging trees; there are beer cans on the bank and Styrofoam and plastic on the water, but the angler out for new experience trudges on because, well, there’s an unlovely realism to the scene, reflections of the current social phenomenon in America, and because the fish, electrifying when fairly hooked, are bigger than the ones most guys catch in Alaska.” 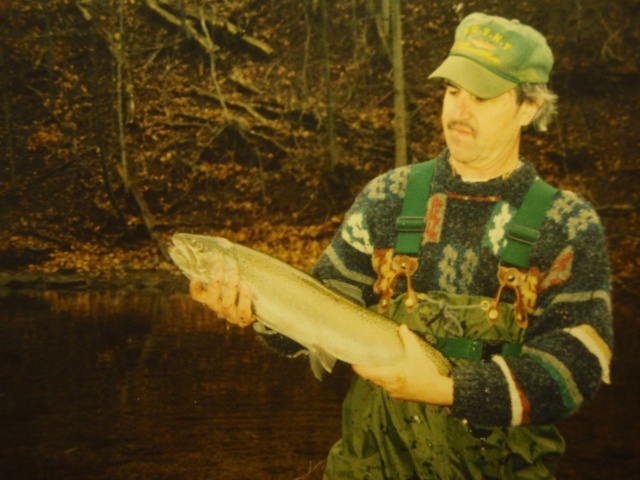 Welcome to Rivertop Rambles. This is my blog about the headwaters country-far afield or close to home. I've been a fly-fisher, birder, and naturalist for most of my adult life. I've also written poetry and natural history books for thirty years. In Rambles I will mostly reflect on the backcountry of my Allegheny foothills in the northern tier of Pennsylvania and the southern tier of New York State. Sometimes I'll write about the wilderness in distant states, or of the wild places in the human soul. Other times I'll just reflect on the domestic life outdoors. In any case, I hope you enjoy. Let's ramble!
View all posts by rivertoprambles →
This entry was posted in Uncategorized and tagged "River's Edge", Great Lakes flyfishing, Oak Orchard Creek, Pacific salmon, Salmon River, spawning brown trout, Wood Thrush Books. Bookmark the permalink.