Posted on August 8, 2012 by rivertoprambles

trout streams weren’t encouraging. The upper Genesee registered 76 degrees F., and Cryder Creek, a feeder, 74. Not good for native trout or angling man. But I resolved to briefly wash away concerns of man-made climate change by purchasing a six of bottled beverage (for after-dark consumption) and by climbing into the woods near home.

Blackberries at the ferny openings, and bluegills at the little pond just might be therapeutic. I stuffed a few supplies into the pockets of my fishing shirt and shorts, grabbed the smallest fly rod and a walking stick, and struck out for the woods.

The blackberry stop in the brier patches sent a sweet, controlled explosion through the taste buds and erased the pain of thorns at my arms and legs. The berries on this shaded slope were only now beginning to ripen in earnest, but I found enough to satisfy my curiosity and to fuel the walk beyond. 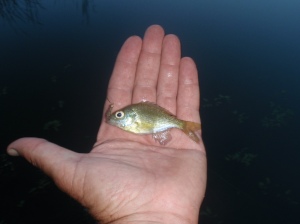 Moaning bullfrogs leapt wildly from the pond’s edge. Stringing up the rod and reel, I listened to songbirds agitated by the possible presence of a hawk or an owl. A grey fox barked, and I could hear the shouts of young people actually enjoying an outdoor minute in the valley near town.

The first two sunnies that took the fly were predictably miniature. I didn’t come here to catch big fish in the bluegill pond, but the next take was surprising to both the plate-sized sunfish and the guy who had only wanted to enjoy an hour at dusk. Nice fish for a secret pond. The woods had grown dark, and nearly every bird was silent. A wood thrush piped a slow and bluesy phrase or two from well inside the forest, and I knew that a nesting season was close to an

end for nearly every avian species.

Walking homeward on the same path I had climbed, I could barely see the blackberry bushes where I’d stopped an hour before. A late summer night was here.

Welcome to Rivertop Rambles. This is my blog about the headwaters country-far afield or close to home. I've been a fly-fisher, birder, and naturalist for most of my adult life. I've also written poetry and natural history books for thirty years. In Rambles I will mostly reflect on the backcountry of my Allegheny foothills in the northern tier of Pennsylvania and the southern tier of New York State. Sometimes I'll write about the wilderness in distant states, or of the wild places in the human soul. Other times I'll just reflect on the domestic life outdoors. In any case, I hope you enjoy. Let's ramble!
View all posts by rivertoprambles →
This entry was posted in Uncategorized and tagged bird song/nesting, blackberry picking, bluegill flyfishing, small pond life, thermal pollution, woods walking. Bookmark the permalink.

2 Responses to Blackberries and Bluegills