Posted on August 3, 2012 by rivertoprambles

It was a dark and stormy… end of the week. My son, with girlfriend, drove up from 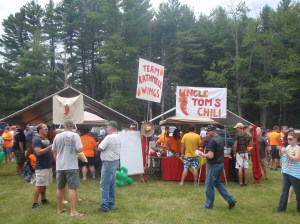 Virginia and got to witness some of the tornado/t’storm damage occurring just west and east of these rivertops. The next 24 hours were calmer here (some neighboring communities were powerless and had to start big clean-up projects) but this family was involved with a whirlwind of domestic duties.

It was my wife’s birthday. She elected to stay home and prepare an evening’s meal outdoors, while I tagged along with the young ones at a wine-tasting high above the shores of Keuka Lake. We bought some Dr. Frank wines for Leighanne and the elders then repaired to the homestead for an evening around the fire with friends and relatives.

The following day was… dark and stormy… somewhere in the world, but here it wasn’t bad despite the heavy cloud-cover. I drove down to Pennsylvania, not to fly fish but to help with the Slate Run Sportsmen booth at the expansive Chili Cook-Off near Slate Run. After talking to fly-anglers (both practicing and prospective) for longer than psychiatrists advise, I returned to New York and met the family and friends at Corning’s Thali of India for an excellent dinner pre-paid by the kids. I shouldn’t neglect to mention that en route to Corning I had stopped for a beer in Galeton where a woman at the bar asked if I was Jimmy Buffett. She had probably been there all afternoon. I said, “No, I’m not, but I’ve heard of him.” The female bartender then sidled up and added, “But I’ll bet you wish you had some of his money, right?” As my son would later remark, “You should’ve told them you were Warren Buffett, but then they wouldn’t know what you were talking about.”

From all our food and drink that weekend, it might’ve been a dark and stormy night… inside the bowels, but it wasn’t anything that a good hike through Watkins Glen State Park couldn’t fix the next day with a walk beneath blue sky. We strolled down the Finger Lake feeder stream beginning at the upper entrance to the park, and most of us climbed back up to the car when finished (a 1.5 mile walk each way). I hadn’t seen the Glen in many years. Despite the presence of way too many visitors that day, you couldn’t help but feel that this natural wonder (far removed from the famous race track) truly is an upstate jewel. 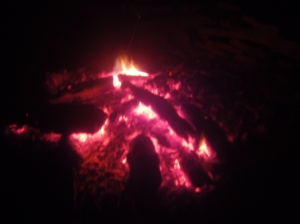 The whirlwind ended when we said farewell to my son and his partner following our ramble through the Glen. Actually it ended when the two of them returned safely to Virginia on… a bright or possibly a hazy night.

Welcome to Rivertop Rambles. This is my blog about the headwaters country-far afield or close to home. I've been a fly-fisher, birder, and naturalist for most of my adult life. I've also written poetry and natural history books for thirty years. In Rambles I will mostly reflect on the backcountry of my Allegheny foothills in the northern tier of Pennsylvania and the southern tier of New York State. Sometimes I'll write about the wilderness in distant states, or of the wild places in the human soul. Other times I'll just reflect on the domestic life outdoors. In any case, I hope you enjoy. Let's ramble!
View all posts by rivertoprambles →
This entry was posted in Uncategorized and tagged chili cook-off, family gatherings, Slate Run Sportsmen, Warren vs. Jimmy Buffett, Watkins Glen State Park, wine tasting. Bookmark the permalink.