The evening of my birthday was the day before the Summer Solstice. Another angler was 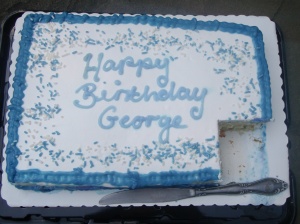 parked at the upper end of the Catch-and-Release water of the Genesee River. I opted to fish alone on a quiet upstream pool near the New York-Pennsylvania border. It was a bluesy night. I was feeling old. Leighanne was still at work; Alyssa was visiting friends in Ithaca; Brent was working in the nation’s capital. No problem, said the birthday guy; we’re born alone; we die alone and, for better or worse, we sometimes fish alone, as well.

It didn’t help much that my favorite season was making an official exit from the calendar year. I tried to focus on the river: nice long pool with a riffled surface and an adequate depth (watch out, some of those rocks along the north bank are like bowling balls of different sizes!). Japanese knotweed, an invasive plant that pushes out native growth along our riverbanks, seemed to rise up in my face as I watched for insects and for feeding trout. Songbirds picked up the slack for a sorry flyfisher casting from mid-river: it was good to listen to and watch the numerous species busy with their own lives here– hermit thrush, cardinal, song sparrow, yellow warbler, mallard, cedar waxwing, and veery, among others. 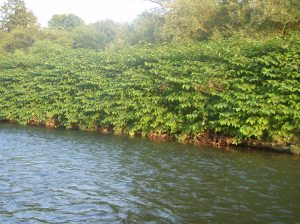 A brown had fallen for a dry Black Ant. I switched to a small Tan Caddis and added a soft-hackle wet fly for a tandem rig. Several more fish struck, unquestionably favoring the wet fly pattern. But fishing was slow for most of these last few minutes of Spring– life passes quickly no matter the situation, but yeah, fishing can be slow. I attempted to assume a Zen-like attitude for this outing. Instead of wading and hiking to the best locations for trout, I simply selected a pool and waited for the trout to find me. 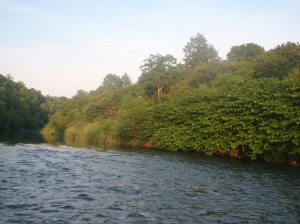 It was getting dark and I was ready to call it quits, but I decided to try a Sulphur dun (a small #18 dry fly hook), and with a single cast of this pattern I perceived a nice fish rolling on the surface. The trout was hooked and it struggled hard. I gave the fish some line, and it thrashed and swam in circles around the pool. Just then I heard what sounded like the distant bellowing of a cow. After several moments I realized there were no farms in the immediate area; the mooing came from the ringtone of the cell phone in my pocket. The familiar funky notes of a rock tune sounded bovine as they filtered through layers of blue jeans, breathable waders and a whole lot of river pressing up against them. 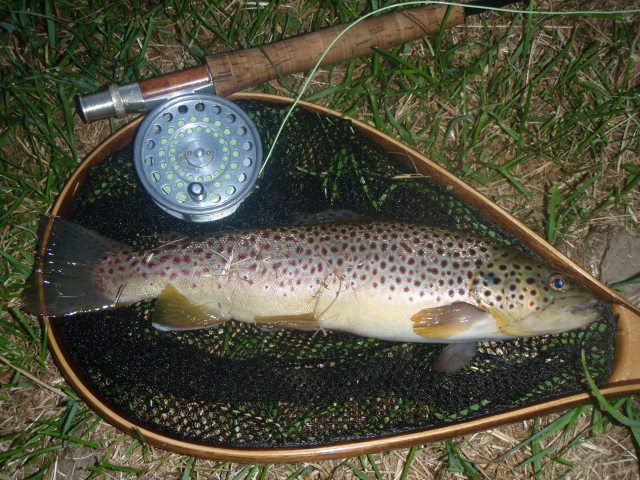 A kingfisher laughed derisively from the next pool down as I attempted to juggle brown trout, landing net, and cell phone simultaneously. The sun was setting and official summer was about to dawn.  I may have been feeling old, but here it was– a good brown trout in the net, and another call for a happy birthday. Suddenly the day’s end seemed as cheerful as a thrush note from the woods. 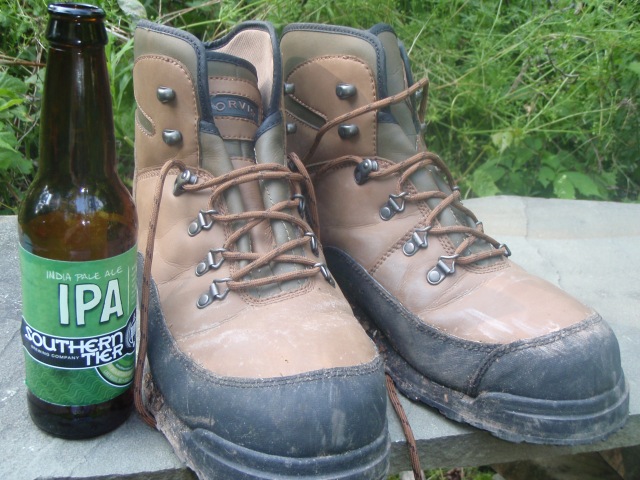 Welcome to Rivertop Rambles. This is my blog about the headwaters country-far afield or close to home. I've been a fly-fisher, birder, and naturalist for most of my adult life. I've also written poetry and natural history books for thirty years. In Rambles I will mostly reflect on the backcountry of my Allegheny foothills in the northern tier of Pennsylvania and the southern tier of New York State. Sometimes I'll write about the wilderness in distant states, or of the wild places in the human soul. Other times I'll just reflect on the domestic life outdoors. In any case, I hope you enjoy. Let's ramble!
View all posts by rivertoprambles →
This entry was posted in Uncategorized and tagged birthday fishes, brown trout, India Pale Ale, Japanese knotweed, Orvis boots, songbirds, Sulphur dun, Summer Solstice, upper Genesee River. Bookmark the permalink.