With the long holiday weekend and commencement of a new summer season, city folks were up in the mountains at their streamside camps, and some of them were swimming, sunbathing, while the little ones were buzzing around the yards and meadows on 4-wheeler rockets. Fishing the trout streams at midday was already falling off the interest register. It was time to escape the heat and holiday noise by skulking into the woods, along the feeder streams, and looking for native trout.

This little stream is a beauty, one that escaped my attention for years, a tiny class A Pennsylvania feeder stream, remote and wild. On reaching it, following a long walk in hot and humid weather, I made a futile attempt to shake off an irritating cloud of gnats around my head, which caused me to accidently flip the fly line into a tiny riffle. Wham! Brook trout number one.

It seemed as though every miniature pool in this cold mountain stream had at least one brook trout eager for a surface bug. My casual exploration of the six to eight-foot wide flow began to offer some of the fastest trout fishing I’d ever had. The forest environment itself intrigued me. Nowhere was there a sign of human activity– no tires, no plastic, no aluminum, no bootprint, and I hoped it stayed that way for as long as possible. To minimize my own impact on the stream, I put on the angling brakes after 15 trout in about half an hour’s worth of careful stalking. Had I been crazier than usual and feeling the greed, I probably could’ve reached the hundred trout mark in two miles of climbing, but it was time for self-restraint.

I felt like a visitor to this forest so I tried to slip beneath the mountain radar. The barb on the dry fly hook had been removed. Each trout was released as quickly as possible from my croutched position near the water, eyes and heart glazed from appreciation of the small trout’s color, from its struggles and its instinct to escape. In addition to enjoying the solitude of micro-flyfishing at its best, I saw there was more to it than escape from the stresses of a zany human life.

A wild fish, a native fish, deserves respect and recognition and the right to evolve without the meddling of our kind. I wasn’t camping out; I wasn’t about to eat a fish with my beer and fried potatoes (although wild trout will have their place on someone’s plate). I was just passing through. It was enough to know they were there. 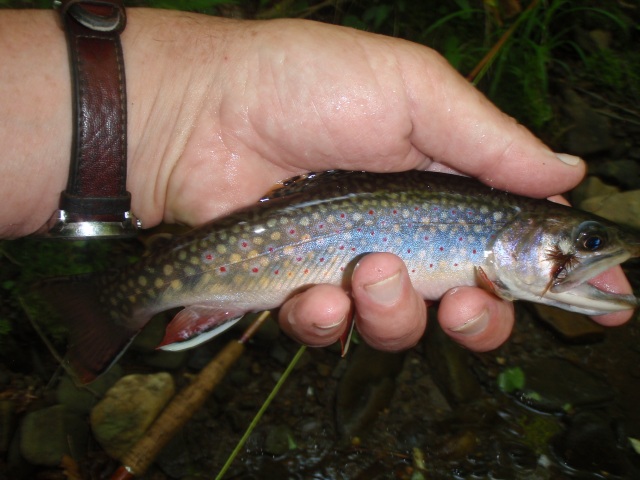 Welcome to Rivertop Rambles. This is my blog about the headwaters country-far afield or close to home. I've been a fly-fisher, birder, and naturalist for most of my adult life. I've also written poetry and natural history books for thirty years. In Rambles I will mostly reflect on the backcountry of my Allegheny foothills in the northern tier of Pennsylvania and the southern tier of New York State. Sometimes I'll write about the wilderness in distant states, or of the wild places in the human soul. Other times I'll just reflect on the domestic life outdoors. In any case, I hope you enjoy. Let's ramble!
View all posts by rivertoprambles →
This entry was posted in Uncategorized and tagged class A wild trout, fishing mountain streams, micro-flyfishing, minimal impact, native trout, Pennsylvania Wilds. Bookmark the permalink.