As always, please click on photos to enhance image… 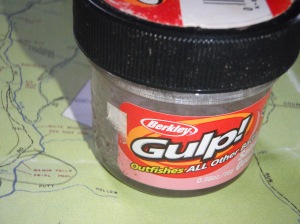 At last report from my upstream hike along Slate Run, I had made it to the Manor Falls without seeing many trout. Today I continued the fishing but didn’t make it far above the falls. Again the question: where had all the wild brook and brown trout disappeared to?

The day began by joining Dale Houseknecht and Dale Blouch plus half a dozen other Slate Run Sportsmen volunteers for a clean-up and sign posting session on the eight-mile run that’s designated “Fly Fishing Only” by the state of Pennsylvania. Last fall I’d seen a lot of abandoned camp equipment and assorted trash at the Crooked Tree Hole and I wanted a small crew to collect it. This morning, Dale and Dale (“Dale Squared”) and I dropped into the wooded gorge, pausing briefly to investigate a colony of fringed polygala flowers, purple orchid-like blossoms that I hadn’t seen in years.

An intricate song of the winter wren lent a high-pitched serenade to our work of gathering “everything but the kitchen sink” at the camp’s edge. Into a big blue “bathtub” went disposable diapers, beer and soda cans, a blue tarp, etcetera. Dale B. grabbed one end of the tub and I picked up the other. Dale H. hoisted a dilapidated table and up we climbed. Would it rain today, as predicted? We hoped so, even though we planned to fish Pine Creek and Slate Run later in the day. The streams were looking desperately low. 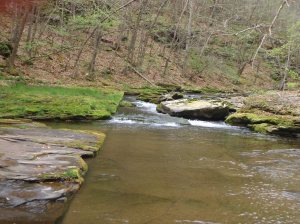 We each bought a Dagwood sandwich at Wolfe’s General Store in Slate Run then walked over to Jeff and Karen Fry’s camp overlooking Pine Creek. Swallows were picking off a hatch of Cream Caddis and March Brown mayflies. We enjoyed the liquid fruit of  Dale Houseknecht’s hobby as a vintner. Dale’s “Chablis” and “Steelhead Red” accompanied our sandwiches the way a finely tied mayfly or a streamer ferries our wishes to a powerful strike.

The rain held off for a while as we reentered the gorge above the Manor Fork.

The run was 54 degrees, clear and knee-high to an average-sized angler. The stretch from the Manor Fork to the falls is probably the most visited water on remote Slate Run. A young couple jogged their way past us to the waterfall. By the time I reached the deep pool below the falls, the fellow was dripping wet and pulling up his underwear. The young lady had kept her clothes on. They took a short walk into the woods and I climbed my way to the brink. Salmon eggs lay strewn in shallow water beside a little jar of Gulp! (“Outfishes All Other Bait!”). Again I cursed the lawless, garbage-chucking mind-set that had penetrated this specially regulated stream, and the fact that conservation officers don’t appear as much as they should. Some of that is understandable. Wardens have their hands full down below, on big stocked streams like the Pine. And that’s where the bait and spinning anglers should be working– on the big Pine (87 miles of free-style fishing) and countless other trout streams like it. On the eight-mile Slate (fly fishing only since the 1950s) we’ve got a poaching problem. I showed Dale the salmon eggs and he grumbled,

“No wonder we’re not seeing fish.”

I followed the bugs upstream to a point I call “Boulder Dam,” where I did some futile casting in the hope that an imitation of Cream Caddis or March Brown or Rusty Spinner would connect. The long awaited rain began to intensify. Dale and I walked out to our vehicles and toward a beer at the busy Hotel Manor. An adult bald eagle flew past our window on the Pine. Tree swallows scarfed up insects over anglers in the rain. 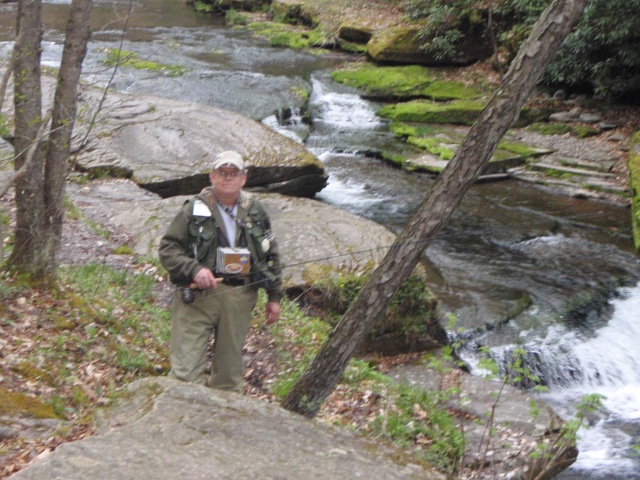 Welcome to Rivertop Rambles. This is my blog about the headwaters country-far afield or close to home. I've been a fly-fisher, birder, and naturalist for most of my adult life. I've also written poetry and natural history books for thirty years. In Rambles I will mostly reflect on the backcountry of my Allegheny foothills in the northern tier of Pennsylvania and the southern tier of New York State. Sometimes I'll write about the wilderness in distant states, or of the wild places in the human soul. Other times I'll just reflect on the domestic life outdoors. In any case, I hope you enjoy. Let's ramble!
View all posts by rivertoprambles →
This entry was posted in Uncategorized and tagged bald eagle, Manor Falls, March Browns, Pine Creek, poaching, polygala, Slate Run, Slate Run Sportsmen. Bookmark the permalink.