Walking into the Past (A God Game)

Before Chris Peterson left western New York journalism for the wilds of Montana, he 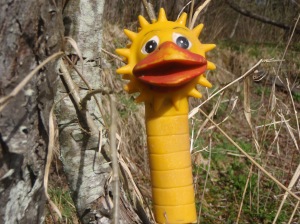 published a list of his favorite wild trout streams in our region. Each stream got a few words from his own fishing experiences. On Fulmer Valley Brook: like walking into the past. I took those words to heart, thinking the place sounded like fun and, indeed, the little stream was intriguing. It was like going to meet God on his original stomping ground and deciding there and then if you were going to become a believer or remain an atheist or agnostic. The small stream had a wild flavor and yielded several large brown trout near the headwaters, fish that were alledgedly consuming the smaller natives at a rapid pace. But several days ago I revisited Fulmer, downstream of my usual haunts because of the diminished flows, and had a rough time of it. The water was cold, clear and low. I saw distracting sights: wayward tires, plastic bottles, glimpses of a house or cabin. Instead of walking into pristine landscapes peppered with hiding fauns and demi-gods, I saw the tenements of God behind each piece of crap that had washed up on an otherwise pretty bank. 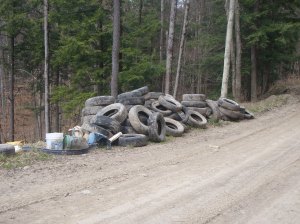 I moved on to another little feeder of the upper Genesee River, this one even more remote and forested than Fulmer Valley Brook. This visit with a fly rod once again reminded me of “walking into the past”– if the past included stories of rural residents dumping garbage into ravines, of people finding it easier to toss their garbage into a convenient gulley than to properly dispose of it. Several years ago I organized a major clean-up of the stream with Trout Unlimited, and this year another clean-up of the stream is being planned for late spring, with TU and other volunteers from Alfred State College already having hauled big stuff like tires and mattresses to the roadside in preparation for a ride to the county landfill. Currently this native trout stream is a prettier sight than it’s been in recent years, and evidence suggests that dumping has become a thing of the past. I caught a few speckled trout here– where the wild leeks greened the slopes nearby and where clusters of spring beauty and hepatica starred the banks. God wasn’t anywhere near this place today, as far as I could tell, but his tracks were there, or so I imagined.

I caught up with the old guy at a third stream in the headwaters. This was one where TU has made a positive impact in recent years, and I imagined God was hanging around to look things over. I took pride in the fact that we were here on a sparkling native trout stream with very little trash in evidence. It was an excellent day in early spring. I felt like I had walked back in time to a place where God and man could talk together while casting flies. I imagined a duel with God. We were casting wet flies in a game of “One Fly, Maybe Two.” I had chosen a Gold-ribbed Hare’s Ear with a Hendrickson nymph as a back-up. God had chosen a Black Stonefly nymph with a Grannom wet fly as a second pattern. 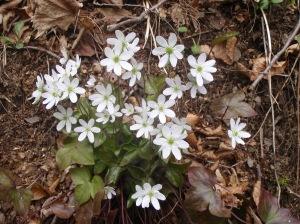 We could use no other flies. God had home-field advantage and approached the first pool carefully. He’d try his hand for a while then say, “Okay, your turn.” We went back and forth, stalking our way upstream through each riffle and pool, no one better than the other, looking forward to a point scored for each trout captured and released. As the midday heat began to dry me out, I started thinking about the prize that the loser would bestow upon the better angler: a case of assorted beers from Southern Tier Brewers. If I won, I also had the option of telling

God exactly what I thought of Him without concern for any consequences.

The daydream didn’t go as planned. (You might be thinking that this fisher just had too much time on his hands… Granted, I was on vacation, but a small dream is a helpful thing while fishing pristine water…). God lost his Stonefly on a backcast into a tree. He replaced it with a Grannom and began to fuss about his leader tippet. I grew impatient. God then made a cast into one of the finest runs on the stream. As he caught another brook trout, I knew the game was up. “You win,” I said reluctantly. “I’m buying.”

“No way, buddy. I’m just starting to get the hang of this. You quit now and you probably won’t like the consequences.”

“It means you’re the loser; I’m the winner. And I don’t want your beer. Go up there to the bend in the stream and look at the bank. People are ignoramusses.”

I may not have had any premonition about the sight at the bend, because when I saw it I was certainly alone and sober as a rock. A rusty leg-hold trap was wired to an exposed root in an undercut. The trap, probably from an autumn setting, held a rotten leg with flesh and bone weaving at the water’s edge. Some trapper had never bothered coming back to check his line. What did God have to do with this? Were we all ignoramusses believing we could travel in time and even make a positive change in ourselves or in the world? I checked the remnant of a carcass to see what species of life had been held in the jaws of steel. The paw told the story of raccoon. It was dark

flesh and resembled a tiny hand.

Welcome to Rivertop Rambles. This is my blog about the headwaters country-far afield or close to home. I've been a fly-fisher, birder, and naturalist for most of my adult life. I've also written poetry and natural history books for thirty years. In Rambles I will mostly reflect on the backcountry of my Allegheny foothills in the northern tier of Pennsylvania and the southern tier of New York State. Sometimes I'll write about the wilderness in distant states, or of the wild places in the human soul. Other times I'll just reflect on the domestic life outdoors. In any case, I hope you enjoy. Let's ramble!
View all posts by rivertoprambles →
This entry was posted in Uncategorized and tagged God vs. Angler, premonition/responsibility, time travel, trout stream clean-up, Trout Unlimited, upper Genesee watershed. Bookmark the permalink.

4 Responses to Walking into the Past (A God Game)