Posted on April 4, 2012 by rivertoprambles

spring to spawn in various feeder streams such as Naples Creek. Typically there’s some good angling in these tributaries when the trout season officially opens on April 1st. The winter of 2011-2012 was anything but typical, however, and I had doubts the spawning rainbows would be in the streams when the season opened. The lack of snow and the warmth of winter would have stirred the spawning runs earlier than usual. The big rainbows would’ve dropped back to Canandaigua Lake by the time fishermen

stepped out from their hibernations.

Naples village is surely one of the most comfortable and attractive villages in western New York, the home of wineries, great wooded hills, the Sutton Fishing Tackle Company, and a palpable Finger Lakes aura, not to mention the renowned seasonal fishery known as Naples Creek. On April 1st the village hosts the annual Rainbow Trout Derby, a mad gathering of incompleat anglers frenzied with visions of 10-pound rainbows wrestled from the creek and its alluring tributaries. I’m always happy to avoid such derbies, so I visited Naples on the following day to check on the progress of the rainbow run. 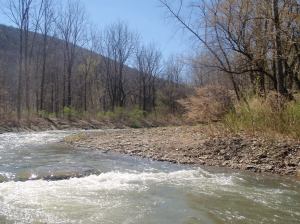 In those fabled springs of yesteryear, I could fish the run at Naples and see large spawners approaching the nine to 10-pound mark. The largest I ever handled there was a silvery fish with a modest length of 28 inches and a weight around eight pounds. That particular trout came out of a deep hole after it hit on a small #14 bead-head nymph. Since then, anglers have noticed a decline in the annual run and also in the size of their fish. There’s a trout imbalance in Canandaigua Lake, a situation compounded by the fact that the forage base has collapsed.  Brown and lake trout are alledged to consume young rainbows since the populations of alewives and smelt are largely gone. Another factor that’s  impinging on the health of rainbow trout is an overuse of high-tech gear on the lake. The killing that occurs is tantamount to hunting

buffalo in a fenced-in field.

April 2nd was a clear, crisp day on Naples Creek. The Derby crowd from the day before had largely dispersed, although a small contingency of anglers were out in the morning giving it the old college try. The creek was in good shape– raised and off-color from the rains the day before. I fished upstream for a mile or more without seeing a trout. “I think the rain’s made ’em all go upstream to the headwaters,” said one fellow. Another angler, more experienced and capable of citing his observations on the creek over a period of several weeks, told me, “No, they can’t be up there, I’ve been watching. With all the warm weather, most of the fish have dropped back to the lake. There’s less fish every day, and even yesterday there was more trout than I’m seeing now. You can still find ’em in the deep holes at the lower end. The females won’t bite but the males will hit. That’s

where I’ll be looking.”

And that’s where I headed, too, with an hour left to fish. I’d try to intercept the drop-back to the lake and get a hook-up. Sure enough, I got one– so small it seemed to beg me to have its photo taken. I reluctantly agreed to take a quick one. So I knelt in the creek, fumbled with the nine-inch trout and the camera until the instrument plopped into the stream. No problem, since the camera was made for underwater shots, but not for sinking into silt and mud. It took some rinsing to get the settings dial in gear again, but the old “Naples’ Drop” wasn’t complete until I waded back upstream, stumbled in the heavy 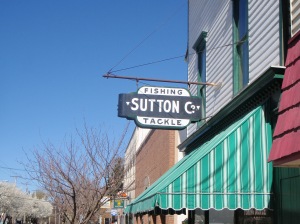 flow and accidently tossed the rod and reel into the drink, as well.

Back at the lot I threw vest and waders into the trunk and slowly recovered my balance. I drove up the hill toward Main Street and parked. Lovely place, with pear and cherry blossoms overhead, tradition in the sight of Sutton spoons behind glass panes and in the elk head of the old hotel. It was time to throw back a tasty micro-brew, to meditate on the drop-back, and to head out to that big lake known as home. 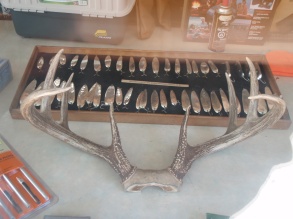 Welcome to Rivertop Rambles. This is my blog about the headwaters country-far afield or close to home. I've been a fly-fisher, birder, and naturalist for most of my adult life. I've also written poetry and natural history books for thirty years. In Rambles I will mostly reflect on the backcountry of my Allegheny foothills in the northern tier of Pennsylvania and the southern tier of New York State. Sometimes I'll write about the wilderness in distant states, or of the wild places in the human soul. Other times I'll just reflect on the domestic life outdoors. In any case, I hope you enjoy. Let's ramble!
View all posts by rivertoprambles →
This entry was posted in Uncategorized and tagged Canandaigua Lake, Finger Lakes, Naples, Naples Creek, NY, Rainbow runs, Trout Derby. Bookmark the permalink.

2 Responses to The Drop-Back