Rainbows in the Rain 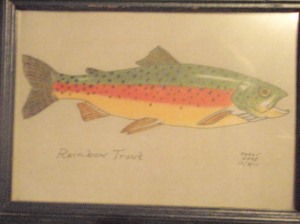 I had planned to head out this morning and fish for steelhead, but a mess of things intervened early on and I decided to give the local Allegheny River one more shot instead. First of all, it was raining– lightly but intermittently enough that the distant steelie water might be too far clouded by the time I got there. Secondly, there was the possibility the five to eight-pound rainbows might have returned to Lake Erie by now, thanks to the strikingly mild winter that we had. I could be miserable and unproductive two hours closer to the lake or I could be miserable and unproductive only 45 minutes away, so that’s what I did, went rainbow fishing in the neighborhood. The fishing wasn’t

great, but it wasn’t a skunk either, and the outing was enjoyable despite the rain.

At the lower end of the Allegheny’s Delayed Harvest water, I found several new project areas, log deflectors and a mud-sill recently installed by Potter County Soil & Water and by God’s Country Trout Unlimited. These groups have done a lot of work in recent years to stabilize and improve the 2-plus miles of river that have special fishing regulations. I crossed the clouding river, headed upstream, and entered a deep riffle that I dubbed  “Alder Alley.” There I caught the first rainbow of the morning. My rod for the day was a 7-foot fiberglass with a full-flex that could handily lift and roll a weighted nymph or streamer through a tight location. 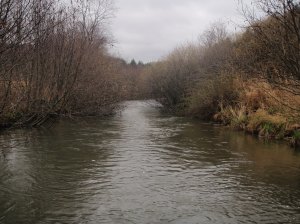 As I entered the pine woods I left behind the killdeer pastures and again met up with the mallards I’d been bumping into. The woods featured a number of big white pines and hemlock trees with plenty of room for wandering with a trout rod. My shoes were cushioned by a thick layer of pine duff. I imagined that the woods, limited in range, were similar in character to the Pennsylvania forests in the time of William Penn. But it wasn’t long before I came to a clearing, and there it was– familiar ground where the sway-bridge had been pulled out of the river. That’s the thing about fishing where you get away from the crowd for a while. 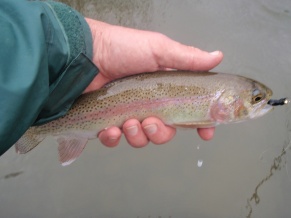 You make all kinds of connections and they needn’t be major hook-ups to be pleasurable.

Hiking back to the car I caught a second rainbow of the day and forgot all about steelhead fishing. I had needed something to boost my outlook for the time ahead, good medicine offered with a sense of place. It wouldn’t be exciting like hooking into major wild fish from the lake, but a handful of rainbows in the rain was like a song, perhaps a blues played cuttingly, with dark joy.

Welcome to Rivertop Rambles. This is my blog about the headwaters country-far afield or close to home. I've been a fly-fisher, birder, and naturalist for most of my adult life. I've also written poetry and natural history books for thirty years. In Rambles I will mostly reflect on the backcountry of my Allegheny foothills in the northern tier of Pennsylvania and the southern tier of New York State. Sometimes I'll write about the wilderness in distant states, or of the wild places in the human soul. Other times I'll just reflect on the domestic life outdoors. In any case, I hope you enjoy. Let's ramble!
View all posts by rivertoprambles →
This entry was posted in Uncategorized and tagged Allegheny River, fiberglass rods, fishing in the rain, Potter County trout, rainbow trout, stream rehab, white pine. Bookmark the permalink.

2 Responses to Rainbows in the Rain